The other day the local youth bureau called asking if my kids could help an older person set up a universal remote for multiple devices – and they declined because I was the only one in our house who knew our system! This is true for millions, making it great news as Blumoo Home Audio Remote Debuts at CES 2014! 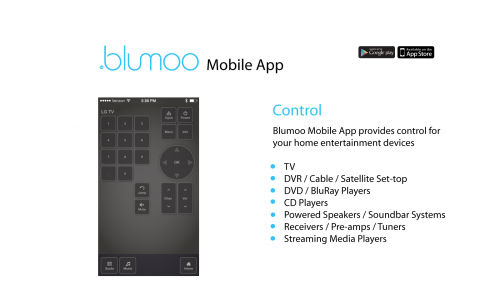 But Blumoo is more than just a universal remote – it can also stream music wirelessly from mobile devices. Compatible with virtually any music source available on iOS and Android, Blumoo users can stream Google Play, Pandora, Spotify, and iTunes to existing home audio systems. It does this through a combination of apps and a hardware interface.

With the Blumoo app installed, the mobile device gains full control of the stereo system, even from outdoors or other rooms throughout the house. The Blumoo app provides a simple interface to access media directories, channel guides, and push reminders for your favorite shows and sports teams. Controlling all of your home entertainment devices from your smartphone or tablet has never been easier.

“We set out to design a simple, affordable wireless music appcessory that’s easy for anyone to set up and use with their favorite mobile device and existing home-audio system. With Blumoo, there’s no more tethering your mobile device to a docking station or having to keep track of various remotes,” said Jason Carman, CEO of Flyover Innovations. “We are excited to demo Blumoo for the first time at CES and bring our product to market in 2014.”

Blumoo is set to be released in the first quarter of this year for $99!

Head to Blumoo for more information!