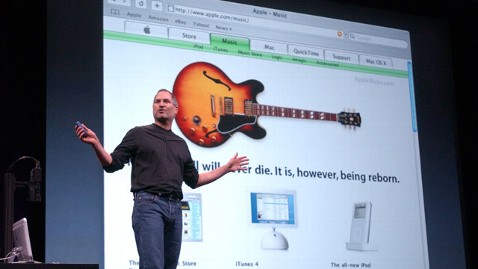 Regardless of which way your opinion swings, there is one thing that is certain: Steve Jobs and Apple CHANGED the music business forever. And April 28th marked the Apple event that launched the iTunes Music Store.

Throughout the second half of the last century, the music business was driven by technology disruption. Edison’s wax cylinders were outmoded by 78RPM platters which sounded much better, which were then replaced in the early 1950s by cheaper and more durable – and held nearly an hour of music compared to the 3-4 minutes on a 78.

While the cassette and 8-track tape were popular and useful (cassette in particular), it wasn’t until the mid-1980s with the widespread availability at affordable prices of the CD (compact disc). Suddenly there was a medium that was much more durable than an LP, fit at least as much music, and offer a sound quality that would never degrade. At first all consumer CD hardware was read-only, but by the end of the decade WORMS drives (write-once, read-many times) were available – but at a steep price.

By the early 1990s computer technology had improved to the point that CD-ROM drives were becoming popular to play games like Myst and use CD-ROM encyclopedias. They could also play music files from the CD drive with appropriate software. This led people to ‘rip’ music from their CDs to their computer – and I even had some music files that could play on the Newton MessagePad in the mid-90s!

Over the next few years the tech world experienced an explosion of cheap storage and faster network speeds that suddenly meant that neither storage nor transfer were a major limiter anymore. Which meant that similar to borrowing your next door neighbor’s Van Halen record to tape, you could now ‘ borrow’ whatever hot new CD came along from someone you had never met living pretty much anywhere in the world!

And that was the landscape in the pre-iTunes era — Napster was a hugely popular way for younger kids to get new music. And amongst those with computers and reasonable internet connections, there was an assumption that it was totally legit — that buying perhaps 1 out of 10 CDs was acceptable. In fact, for many kids there was an assumption that music should just be free. The music industry was freaking out — seeding viruses in files, adding nasty root kits to CDs to prevent copying (Sony), and the RIAA issuing lawsuits that set the values for a single song downloaded higher than the price of a house in most of the country.

So when Steve Jobs came along with the goal of an iTunes Music Store, pitched as providing music that was easy to buy, easy to control and came at a fair price … the music industry grabbed hold hard!

And the rest is history; what started with 200,000 songs is now nearly 30 million. iTunes is the largest music retailer in the world, and the a la carte system has totally changed things in the pop world from ‘album centric’ to single-focused, the way it had been for decades before the CD killed singles.

The music industry has plenty of challenges ahead, although I think most of them are self-induced and related to trying to live life like it was the late 1990s while pretending that this whole ‘digital thing’ never happened.

But this ‘digital thing’ DID happen, and we owe the fact that people feel it is normal to buy music digitally to the leadership of Apple and to the steadfast hard-headedness of Steve Jobs.

Link for video from HypeBot