One of my favorite iOS games of 2015 so far is Radiation Island. It is a first-person open-world survival game with gorgeous graphics, engaging emergent gameplay, and the ability to shape your own course through the adventure. Also a variety of enemies, weapons, locations and hazards, and tools to craft! Now Radiation Island is available on Mac for just $2.99! 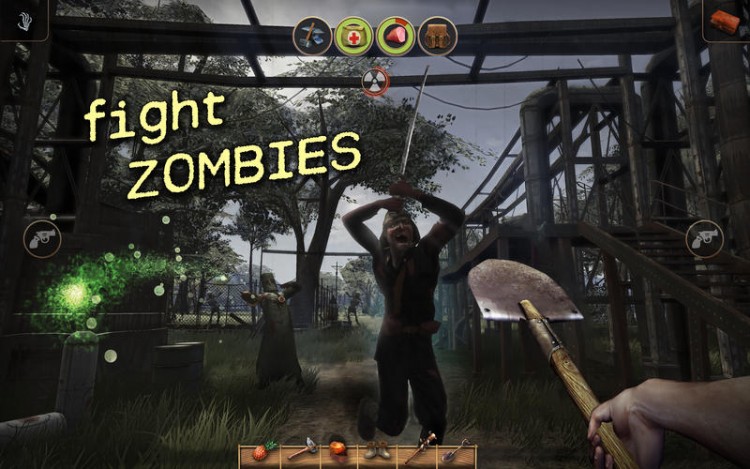 Radiation Island is a survival adventure game where you craft your own destiny in a huge open world environment. As part of the Philadelphia Experiment you have become stranded in a parallel, alternate reality. Discover this new and mysterious world, with all its surprises. Use everything you find to survive it and solve its puzzle to get back to the real world.

Follow your own path in an environment of breathtaking beauty and gigantic scope. Explore huge forests inhabited by dangerous wolves, bears and mountain lions. Investigate abandoned villages and old military compounds where zombies guard vital tools, weapons and clues to the secrets of this world. You can even swim and dive, if you can avoid the hungry crocodiles.

Experience the full day-night cycle and face the dangers of darkness and cold.

Survive and beat the game to unlock multiplayer mode: fight other real players online in a closed arena for valuable resources.

iCloud support is integrated so players can save and share progress across devices. AirPlay lets you play the game on larger displays via Apple TV. Climb the Game Center leaderboards, challenge friends and unlock dozens of achievements.

The iOS version also supports MFi controllers, making it a joy to play! Both the Mac and iOS versions are incredibly inexpensive at just $2.99!

Radiation Island for Mac on the Mac App Store

Radiation Island for iPhone / iPad on the iTunes App Store

Check out the trailer … then grab your copy!