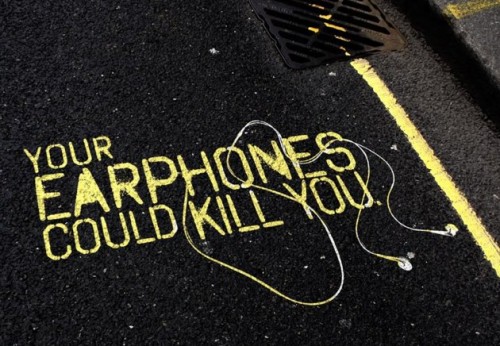 Your Earphones Could Kill You

Running outside brings freedom and opportunities to interact with nature. Listening to music helps pass time, provides a motivation, and creates a pacing rhythm – so long as you listen at a safe volume. Running outside already poses numerous risks – why make it worse with music so loud you can’t even hear these risks? Safe music volume is another key to running safety.

Last weekend I went out for a couple of long runs when it worked for my family schedule. One day that was 11AM after grocery shopping; the other day it was 7PM after dinner. Naturally at these times – and especially with the cool, dry and crisp weather we’ve been having – I am much more likely to see other runners out and about than at 4AM. But unlike most times when I run, I came across two potentially dangerous situations – both related to people with headphones and music so loud that they were oblivious to the outside world.

In the first case it was a case of pure stupidity – I was coming down a busy road with a number of developments on either side. One of these roads had very good visibility, so anyone running or biking needs to be extra cautious because cars approaching the stop will often be looking for the traffic situation more than worrying about stopping and checking for people crossing the road.

I was on one side of the road and saw a runner coming down the other side of the road towards that intersection – and then saw a car heading towards the end of the road. This was already a situation I have found myself in too many times – and I tend to wave the driver on and go behind the car. But the runner wasn’t really paying attention – I could see the black strands of earbuds against his white shirt – and just started full speed across the road without even acknowledging that there was a car.

The driver had decided he had an opening, but upon seeing the runner had to hit the brakes rather than a ‘rolling stop’, and hit the horn … but I never saw the runner even flinch or look up. I had a chill because I was afraid I was seeing a terrible accident, but then my chills turned to anger because as runners we certainly have rights on the road but need to be the ones to exercise extreme caution.

The next day I was doing a ‘tempo run’, and after warming up for just over a mile I kicked up my pace – after fading badly in my recent marathon I am trying to be much better about this. There was a woman ahead of me running at a decent pace, but just a bit slower than me so I was gaining on her. On this road there is a white line because it is officially a ‘county highway’, but the road is narrow with ~2 feet outside of the white line.

As we came to an intersection I was hoping she would turn because the road ahead was even narrower with twists and hills and plenty of blind areas for drivers within the first half-mile – the area where I would overtake her. But alas she continued through the intersection on my planned route.

When I come up behind someone I generally try to make enough noise to alert them to my presence so I don’t scare the crap out of them by saying ‘hi’ as I come alongside them. So as I approached the young woman I cleared my throat, sniffed a bit, scuffed my feet and otherwise tried to be as noisy as possible.

But there was absolutely no reaction. I could see the white earbud wires coming out of the side of her head, so I assumed she was listening to music and couldn’t hear my subtle noise-making efforts. So when I was about twenty feet behind her I said ‘coming up behind you’. Nothing. Ten feet ‘coming up behind you’. Still nothing.

And as I was just a few feet behind I was in perhaps the worst place in the entire section of road to pass, and with her riding the white line and nowhere to go on her left I was forced to the right – in the path of traffic, with an inability to see more than a couple of hundred feet ahead due to the hilly curve. So I call out ‘passing on your right’ more loudly than I had before, and picked up my pace to blast by her as quickly as possible.

As I passed I could hear her music – and it was blaring! I couldn’t tell where she was looking as I passed since I was watching for oncoming cars. I put my hand up to wave and called ‘sorry’ as I passed her and got back to the side of the road as quickly as I could.

But within a few miles when I was in a solid groove on the flat roadway around the airport I got to thinking – that wasn’t just stupid, it was dangerously stupid! Here is a person wearing earbuds – which are intended to allow some amount of outside noise in – who cannot hear me when I am practically shouting from about 5 feet away!

This isn’t a matter of me being an old curmudgeon telling people the music is too loud (sometimes my kids tell me that about my music in the car!), but rather about basic safety – especially for a young woman, with so many awful incidents of assault and kidnapping occurring way too often!

Also, while I have said before I never listen to music on a run, preferring to ‘be one with nature’ – that isn’t what this is about. It is about maintaining situational awareness. I know many folks use music for pacing or just for motivation – go for it, but as Milton from Office Space says, do so ‘at a reasonable volume’.

Here are a few safety tips regarding music and running:

I look at it this way – apart from safety it is a matter of basic courtesy. We all share the roads and trails and paths, and often share them with larger vehicles that cannot stop as quickly or easily as a runner. If you are not able to pay attention, you are placing the responsibility for your safety onto someone else, which is just a bad idea.

What experiences have you had with people too into their music or phone or GPS to pay proper attention while out running or biking?