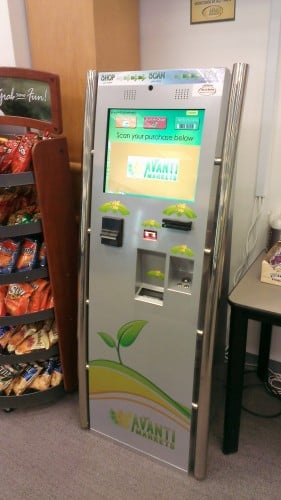 Today’s hidden Linux system is one you probably never think about. Have you ever seen a kiosk like at the airport quick check in counter or running a vending area? Well my friend Dan Frey did at his office and he found out that the kiosk that Avanti Markets uses runs Linux.

Dan, who is one my fellow co-hosts of The Linux Link Tech Show found this out when the vendor that runs his cafeteria at work was installing them.  They needed help setting up the network connections as the installers were primarily familiar with Windows networking. They asked him if he could help since he is a Linux user like myself.

So I got to thinking: How many other kiosks run Linux? I started searching and came across this kiosk vendor by the name of Advanced Kiosks. Advanced Kiosks sells many different kiosk systems that can run Windows OR Linux. The reason for this is that most of these kiosks are actually PC’s with touch screens. So getting  Linux to run on them is not difficult. Running Linux also lets them use some of the same technologies on the front end that they use on their backend systems so the IT staff is vary familiar with it.

Many other kiosks use Linux as well. In 2005 during the aftermath of Hurricane Katrina, Steve Hargadon of Technology Rescue helped setup web kiosks based on Morphix Linux to help those affected by the storm communicate in and out of the affected area. One other company that uses a Linux based kiosk is Travel Centers of America who run truck stops in many areas. They have used Linux based Kiosks running their Road King club for over the road truckers since 2004.

While I am sure that some of these kiosks run Windows, there is just as good a chance that that kiosk you used to check in for your flight or to buy your sandwich could be running Linux.