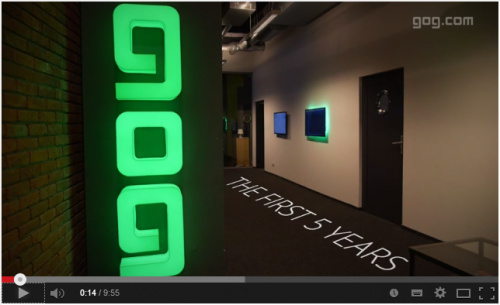 Has it REALLY been FIVE years since GoG.com opened up to the public? Actually it’s been longer – it was mid-November 2008 when I bought Fallout 1 & 2 and fully embraced the site and its model and began amassing what has become a 200+ game collection on the site. Because they have great games, fair prices, and no DRM.

Here is what I said back then:

(they) wanted to make a site that would charge a reasonable amount and give gamers older games that were out of circulation in a convenient, DRM-free package that you can download forever. I *know* … so why are you still here!?!?

It goes beyond just packing up the existing games and charging folks to download – the developers at GoodOldGames have gained access to the source code for all of the games and crafted updated installers to work on Windows XP and Vista PC’s. They have also patched the games and eliminated compatibility issues so that while these are still the same games we loved from a decade ago, they now run on XP & Vista properly.

To celebrate the anniversary they have released a video – here is what they say about it:

In the video, they share some big numbers about how GOG.com has grown. With 18 million free games given away to more than 50 million gamers who have visited GOG.com over the years and more than 360 million hours worth of gameplay downloaded from the service, it’s clear that the last 5 years have brought the service to millions of gamers who enjoy classic and new games on Windows and Mac platforms all over the world.

Check out their personal retrospective: