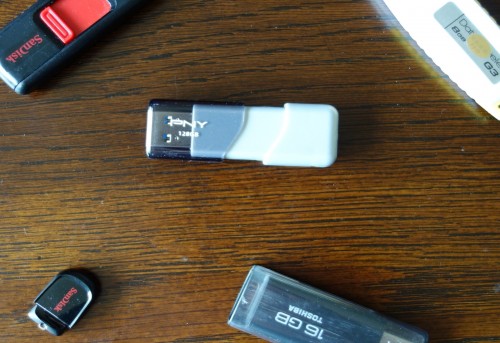 When it comes to flash memory, I’ve always believed that you get what you pay for. Saving five bucks isn’t worth it if you end up with a slow and balky dud. So when I heard that the PNY Turbo 128 GB USB 3.0 Flash Drive was available for under $50, I was skeptical to say the least.

At the time of writing this post, Amazon offers the drive for just $42.99. That’s a considerable discount from an already low list price of $69.99. “Could a quality flash drive of this capacity and speed really be had so cheaply?” I wondered. Since Best Buy price matches to Amazon—and there’s a BB two blocks from where I work—I decided to give it a shot. After a half-hour in the customer service queue, I was on my way back to the office with my hard-fought prize. 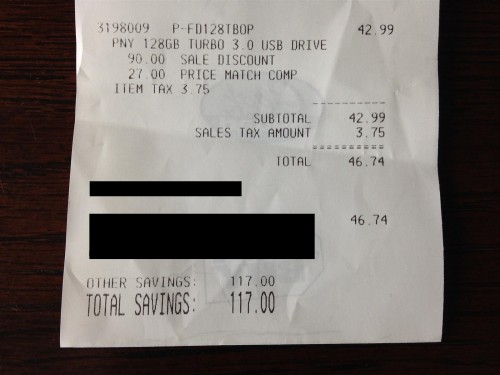 Founded in 1985, New Jersey-based PNY Technologies has been handling memory of all types for decades. They initially offered computer RAM but added various flash memory lines and other products to their portfolio soon after. All in all, PNY has had a pretty solid history of turning out serviceable, inexpensive components. That reputation was fairly comforting: the odds of me stumbling upon a magic hard disk (and spending another half-hour at Best Buy) were pretty slim. The odds of being smacked in the face with oodles of injection-molded plastic, on the other hand… 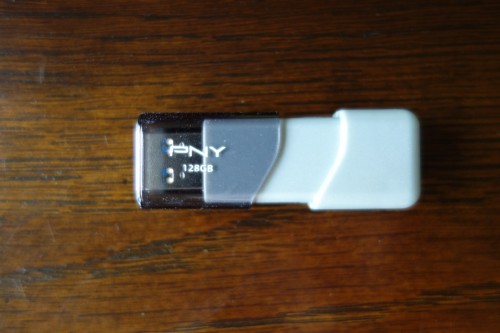 Won’t win any beauty pageants, but neither will any other flash drive. Pageants are for humans, silly.

…yeah. Ew. So what does PNY have to say for themselves?

Get the most out of the USB 3.0 port on your new laptop or desktop computer, and experience USB 3.0 next generation speed performance. PNY’s Turbo 3.0 USB Flash Drive is the perfect solution for easily storing and quickly transferring all your large documents, high-resolution photos, HD videos, and more.

USB 3.0 offers the same ease-of-use and plug-and-play capabilities as previous generations of USB technologies, but with exceptional speed improvements. This USB 3.0 drive is backwards compatible with USB 2.0 devices. Its small capless design incorporates a sliding connector cover-piece, so that means no more USB caps to lose. These USB 3.0 flash drives are small in size, but big on performance and capacity.

It appears PNY has nothing to say about the homely appearance of the drive, except for the highlighted sliding cover. This is ironic, as the sliding cover is unarguably the worst thing about the drive. On top of it not protecting the USB connector from dust and debris, the cover is difficult to move if the drive isn’t held in a very specific way. It is no exaggeration to say that the cover is single-handedly responsible for making this a truly ugly flash drive. Still, if the PNY Turbo can deliver on the claimed 190 MBps and 130 MBps max read and write speeds, I suppose one can overlook the design. It it, after all, a flash drive and not jewelry. 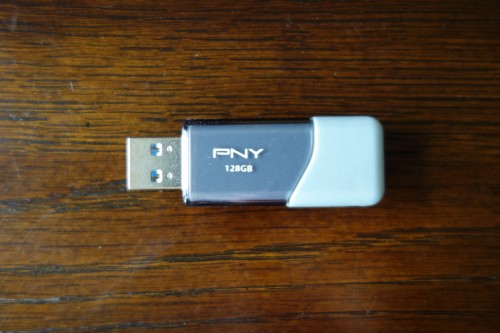 NOT what the PNY Turbo looks like when plugged in to a PC. For starters, this photo is missing a PC.

The piece of software I use for speed tests is CrystalDiskMark (CDM). It tests the read and write speeds of a drive under four different scenarios: sequential, 512 KB blocks, 4 KB blocks, and a queued up set of 4 KB blocks. In real-life, you can think of the first three different file sizes as transferring video files, medium-quality digital photographs, and text documents, respectively. The last test is analogous to having a number of text documents prepared ahead of time.

Note that while CDM is free, there is one prompt for a piece of adware; however, it’s pretty easy to avoid if you’re paying attention. CDM comes in two different flavors: Standard, and Shizuku. The Shizuku Edition is functionally identical to the Standard Edition; the sole difference is that it is themed with CrystalMark’s cartoon mascot, which… well, see for yourself: 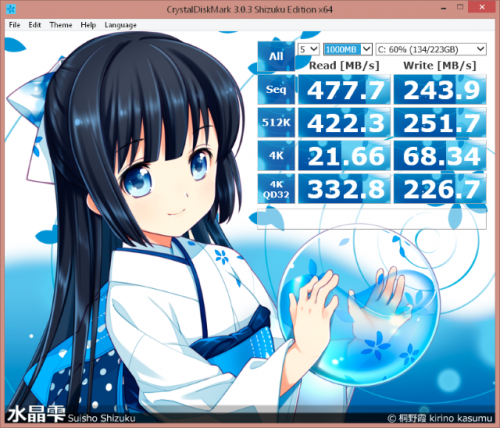 Kind of adorable, I guess… if you’re into that sort of thing.

Needless to say, most people will be perfectly happy with CDM Standard Edition. Speaking of which, here are the results for the PNY Turbo: 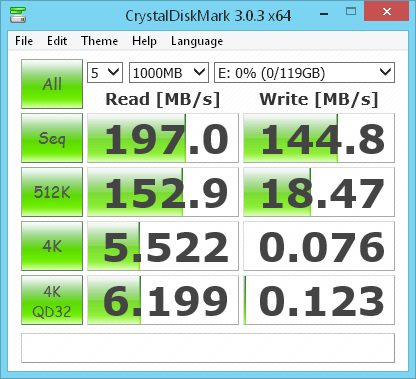 As previously mentioned, the first row shows the test results for sequential transfers, the equivalent of reading and writing video files. With a read speed of 197 MBps and a write speed of just under 145 MBps, PNY delivers as promised. The tests which simulate copying smaller files to and from the flash drive do show a considerable hit in performance. However, the results for these other tests aren’t quite as dire as one might think; computers just don’t “like” dealing with little files. In a way it’s like writing one $1,000 check versus a thousand $1 checks: there’s a bit of work associated with every single transaction, which adds up pretty quickly and slows down the entire process. This traffic jam of file transfers gets worse with flash memory, which has a very particular way of organizing and writing files.

The bottom line is that people who want to transfer or carry with them various multimedia, archives, and other large files will be well served by the PNY Turbo. On the other hand, folks who need a flash drive just to  back up their Great American Novel won’t benefit from the maximum speeds of the PNY Turbo… or any other USB 3.0 drive. Instead, they should opt for USB 2.0 flash drives, which will be much more cost-effective.

For comparison purposes, here are the test results for the Crucial M500 240GB mSATA solid state disk in my Brix Pro, a Seagate Momentus Thin hard drive, and a random Toshiba USB 2.0 thumb drive that I grabbed out of a drawer:

Apart from the ugly, ugly appearance and ho-hum name, there are two other places where PNY cuts corners with the PNY Turbo. First, no software is included in the package. No multimedia software, no encryption packages, nothing. I’m actually quite okay with this, as I’ve never found the software packed in with other brands of flash drives to be very useful or capable. If I wanted to encrypt the PNY Turbo, for example, I would opt for the reliable and open source TrueCrypt; TrueCrypt is available for Windows, Mac, and Linux.

The other decision that PNY made with cost-cutting in mind was to offer a one-year warranty. This duration is pretty common with lower-end flash drives, but considering that the PNY Turbo is supposed to be more of a premium product it’s a little disappointing.

What I Like: Lots of cache for little cash