As of today April 20th, ZTE USA, the fourth largest smartphone manufacturer in the United States, announced that they’ve joined forces with AT&T marking the commercial availability of the 2-in-1 ZTE Spro 2 Smart Projector & Hotspot with mobile hotspot features.

Launching this Friday, April 24th, the ZTE Spro 2 will be available on the AT&T network for the price of $399.99 with a two-year contract or $499.99 if you rather not be tied down to a contract. Which is good because after you receive the Spro 2, you can add it to your AT&T Mobile Share Value data plan for $10 per month. 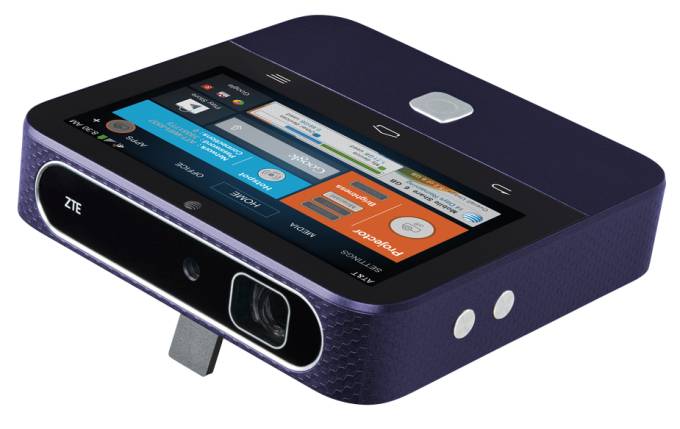 The Spro 2 can be hooked up to your phone or tablet through HDMi and Miracast input, but you can also use the Spro as its own device. Sporting a Qualcomm Snapdragon 800 processor, 2GB of RAM, 16GB of built-in storage, dual-band 802.11b/g/n WiFi, Bluetooth 4.0, a microSD card slot, and a 5 inch, 720p touchscreen display. You can use it to display movies, business presentations, or just about anything else that you could access on an Android phone.

“The Spro 2 is our next generation smart projector with an improved consumer experience that was updated based on consumer insights and product reviews,” said Lixin Cheng, chairman and CEO at ZTE USA. “The Spro 2 increases the practicality of purchasing a mobile projector, hotspot or media streaming device and we are excited to continue pioneering this category in 2015.”

Announced back at CES 2015, ZTE’s Spro 2 was met with rave reviews. Running on the Android OS, and having LTE connectivity available, on top of Google Play access, this smart projector was something that even myself as an Apple person said I would get. Sporting a 5-inch touch display and measuring 5.3 inches by 5.2 inches, on top of weighing just over a pound, this is one little gadget that might come in handy for many folks. The Spro 2 also comes with a 6300 mAH battery which will get you about 2 hours of continuous use and 16 hours of standby.

Please check AT&T’s release about the Spro 2 at their site: SPRO 2 For AT&T