Yuneec Electric Aviation has set its sights on the aerial photography market with it’s new Typhoon Q500 4K quadcopter. The Typhoon sports a Ground Station with integrated Android-powered touchscreen, and 3-axis gimbal camera capturing 4K/30fps ultra high-definition or 1080p/120fps slow motion video with a no-distortion lens. The Typhoon starts at $1,199.99 with a standard case and one battery pack. 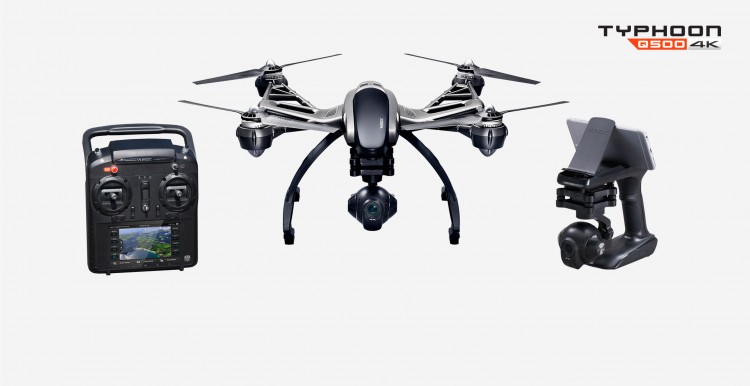 The Typhoon Q500 4K comes with everything you need to get up in the air and take breathtaking footage within 10 minutes after your batteries are charged. My review unit was the $1,299.99 version that comes with a sleek aluminum carrying case as well as two battery packs. 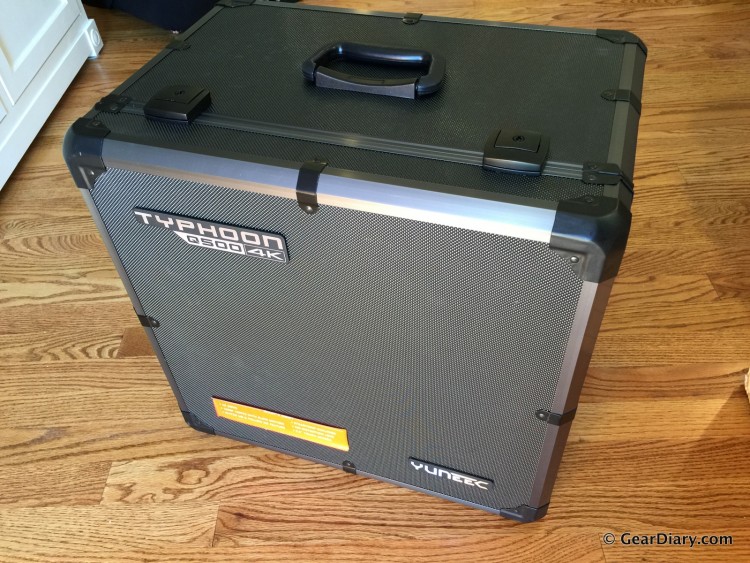 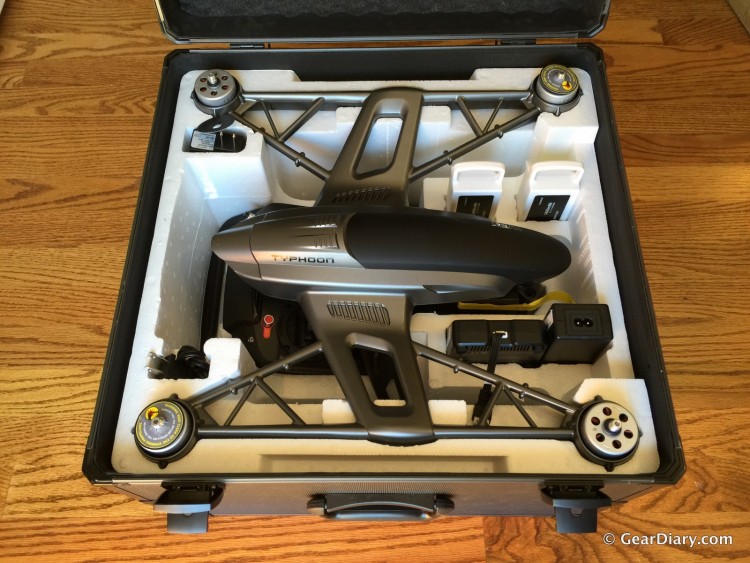 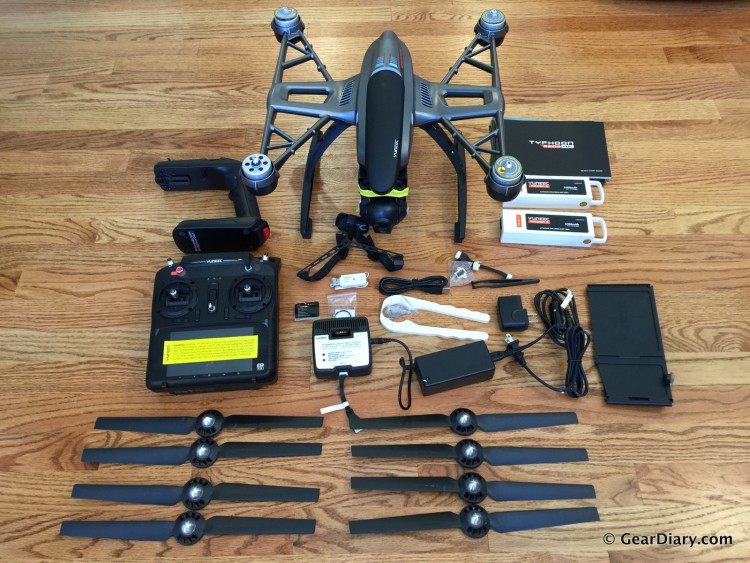 Inside the aluminum case is the following:

The Typhoon itself measures 16.5” x 16.5” square from end to end, and it’s 8.3” tall. The rotors are 13” long, total. The Typhoon weighs 40oz without battery and 60oz with the battery installed. The body and frame are made of plastic…more on that later. The feet are made of a spongy material that makes landings super soft. 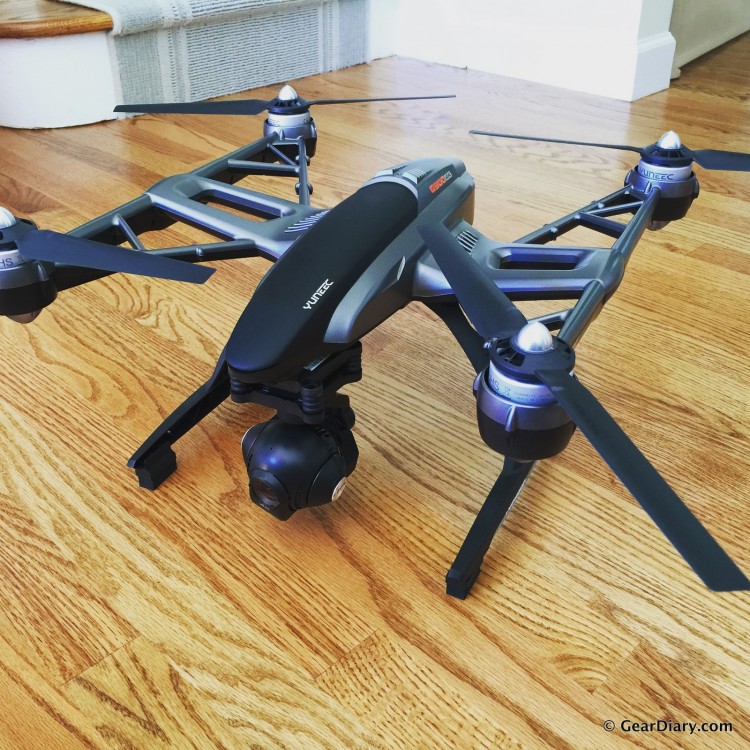 The footage is, as you’ll see, absolutely stunning: 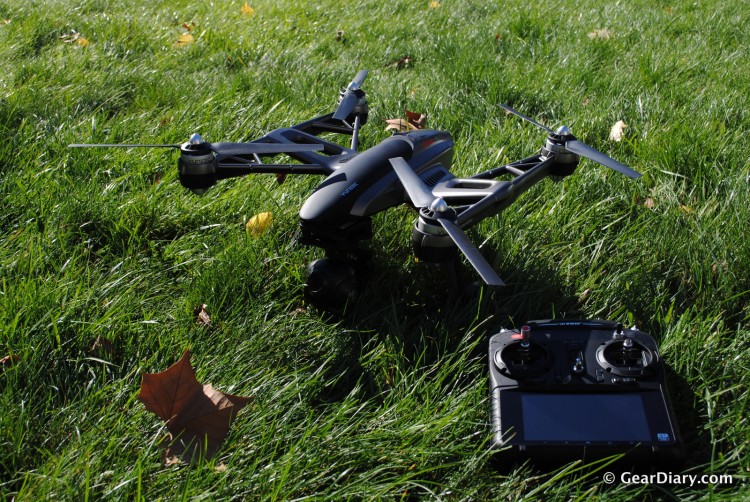 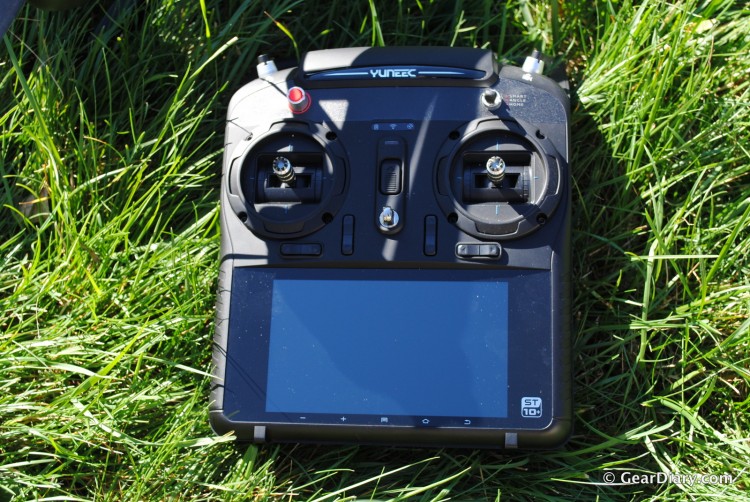 The ST10+ ground control transmitter is a 2.4GHz 10-channel transmitter with a 5.8GHz frequency video downlink. The 5.5” capacitive multi-touch touchscreen is powered by Android, though heavily modified, although you’ll notice the touch buttons on the bottom of the screen scream “Android.” The screen resolution on the screen is 854 x 480 pixels. The video downlink is via WiFi, which allows you to use other WiFi enabled devices like smartphones and tablets to view the live video footage and take photos or video. This also allows you to use the Steadygrip, viewing and controlling the live video on your phone. 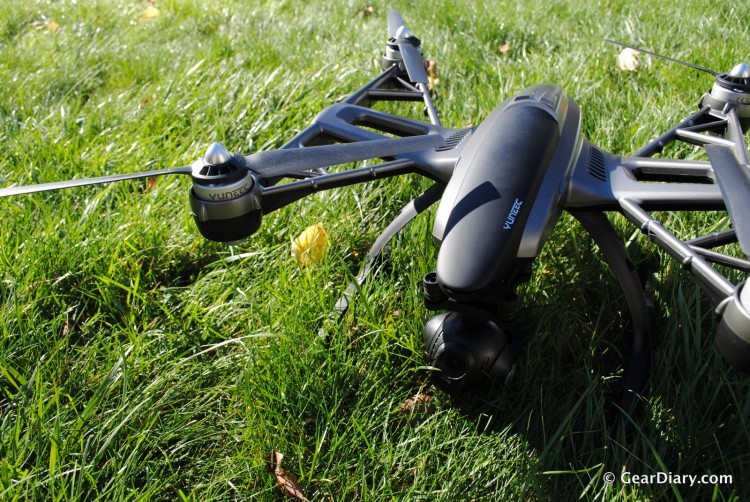 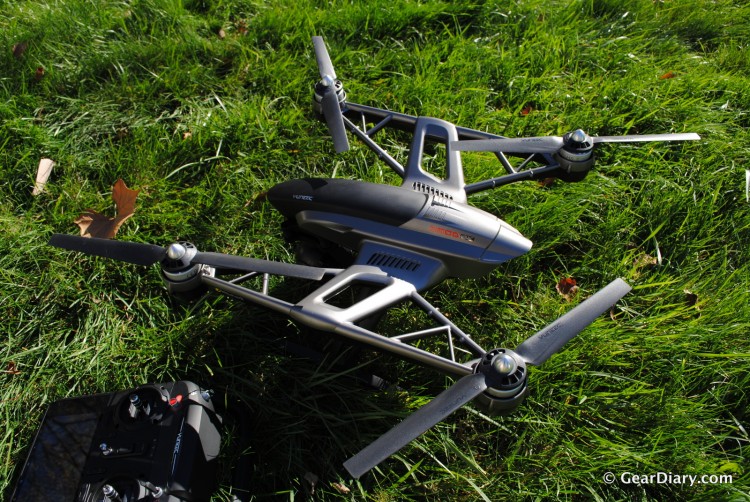 The included rechargeable LiPo battery has a 5,200 mAh capacity and is recharged using a microUSB port on the side of the transmitter. You can also control the camera settings via the ST10+ transmitter, including: white balance, light exposure, ISO, shutter speed, video resolution, and FPS. There are two dedicated buttons on the top of the transmitter for taking photos and starting/ending video recording. The Typhoon comes with a nice neck strap that helps hold up the transmitter, allowing you to focus on keeping your hands on the sticks rather than holding up the transmitter. 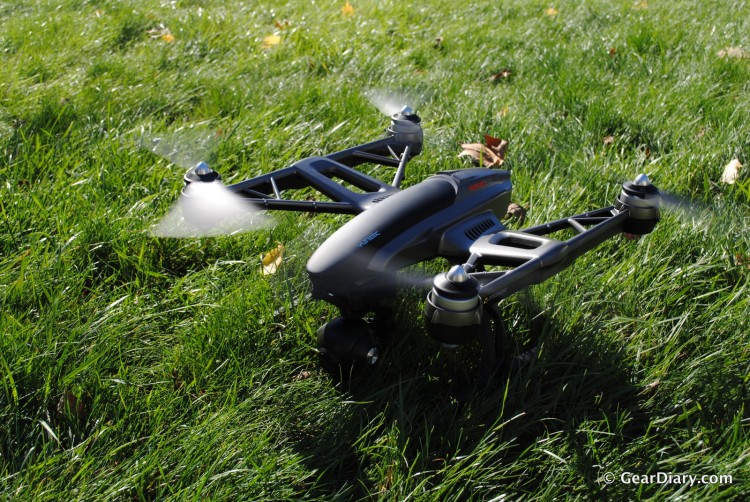 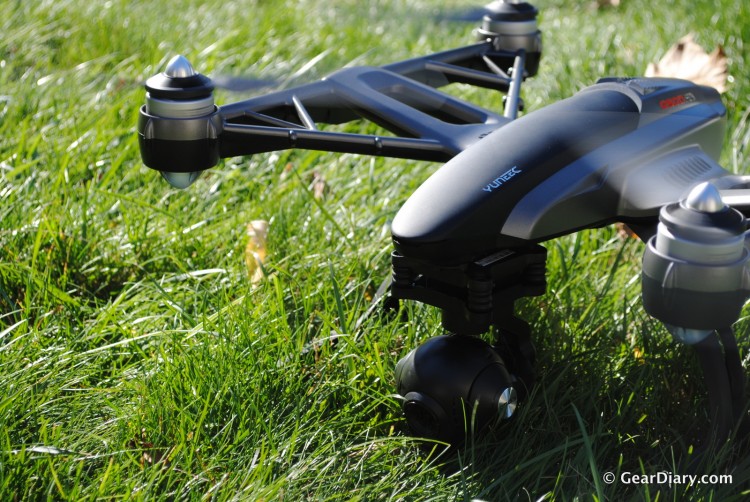 The ST10+ transmitter has GPS built-in, which gives the Typhoon Q500 4K some interesting features as compared to other similar quadcopters. Yuneec has given the Typhoon Q500 4K two smart flight modes called “Watch Me” and “Follow Me.” With Follow Me enabled, the Typhoon will follow the transmitter, no matter where it goes. With Watch Me enabled, the Typhoon will keep the pilot holding the ST10+ in frame and in focus, no matter how or where the drone is maneuvered. Some other GPS-enabled features are the Smart Circle and Dynamic Return Home. The Smart Circle doesn’t allow the Typhoon to fly within 26 feet of the pilot or fly more than 300 feet from the pilot’s position. The Smart Circle can get confusing when you’re trying to fly the Typhoon near you to land but it just won’t come any closer to you. Dynamic Return Home is one of the neatest features. When you switch to Home Mode, the Typhoon will fly back to the pilot (within 13 to 26 feet) and autonomously land by itself. Crazy, right? 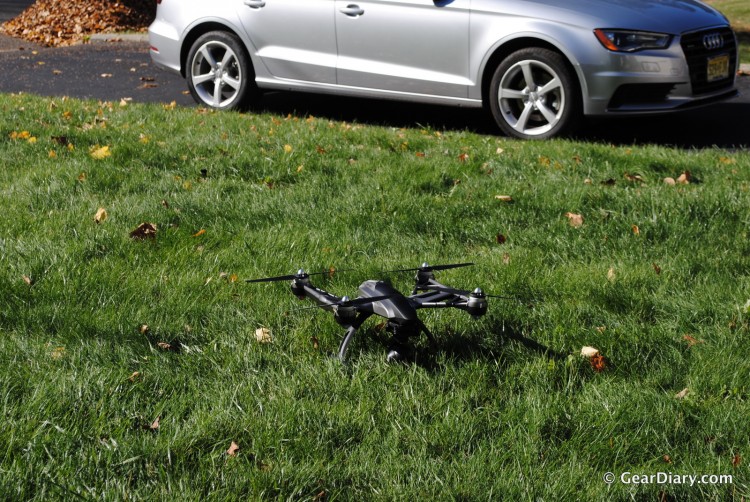 The 5400mAh rechargeable LiPo batteries each have a flight time of about 25 minutes, which is great for long flight sessions since you can have multiple battery packs charged and ready to swap out. The battery charger is a 3S 11.1V balancing smart charger that maximizes the capacity of your battery packs. The battery packs are great because they can be inserted and removed using built-in handles without dealing with any wire connections, making battery swaps quick and painless to keep flight stoppages to a minimum.

I can describe my experience with the Typhoon Q500 4K in one word, whether it’s setting it up, flying smoothly through the air, or capturing stunning footage: its ”easy.” Setup was a breeze, as you just have to screw the propellers on to the motors, insert the battery pack, and turn on your quadcopter and transmitter. Learning to fly the Typhoon Q500 4K was also easy, thanks to Yuneec’s three flight modes: Smart, Angle, and Home. In Smart and Angle modes, moving the left joystick up increases your altitude and the quadcopter will just hover there until you give it another input. Home mode simply brings the Typhoon back within 13-26 feet and it lands itself on the ground. Easy. There are LEDs on the bottom of the Typhoon that let you know which way you’re facing; red towards the back, white towards the front. 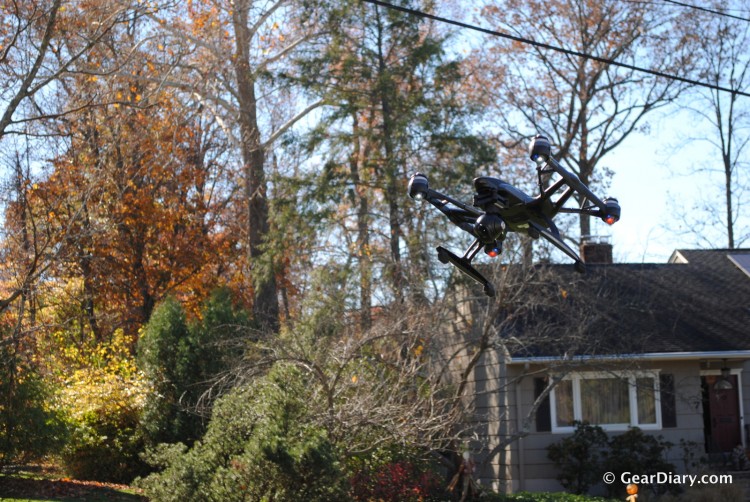 I would be remiss if I didn’t mention that I did have some issues the very first time I flew the Typhoon, though, as I hit a low-hanging tree branch about 10’ off of the ground. Unfortunately, the Typhoon was no match for the thin branch and the Typhoon tumbled to the ground, breaking two rotor blades and cracking the Typhoon’s plastic frame. This was a bit disconcerting, as if I am spending around $1,200 on a quadcopter, I’d like to think that it would survive a seemingly minor 10-foot drop to the grass. Thankfully, however, a little Bondic did the trick to patch the frame back up and I swapped out the broken rotor blades with the extras that Yuneec thankfully provides. Keep in mind that the Typhoon is meant to be flown in an open area, away from trees, people, and other obstacles. 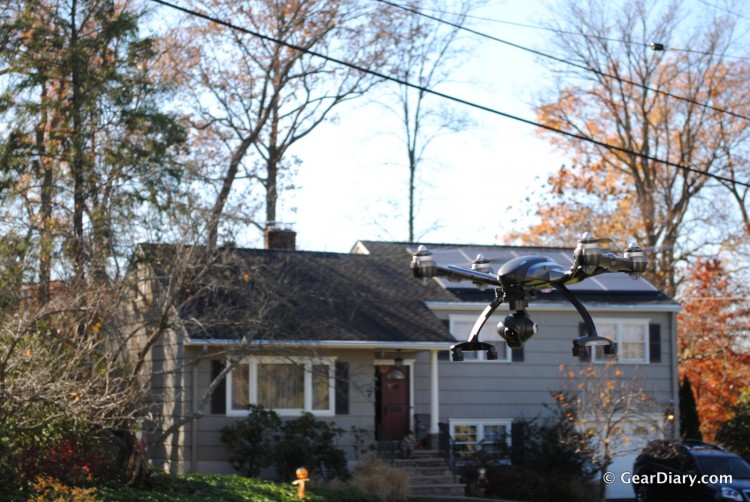 After getting more experienced with how the Typhoon Q500 4K flies, however, I was able to have some fun and get some great footage at my local high school. Using the Typhoon in Smart mode allows you to get great, steady footage with minimal flying experience. But I found that flying in Angle mode was a lot more fun, although due to the quickness of the Typhoon’s response and the way the quadcopter bows while making quick turns, you may see rotors quickly flash on the footage when making these speedy maneuvers. 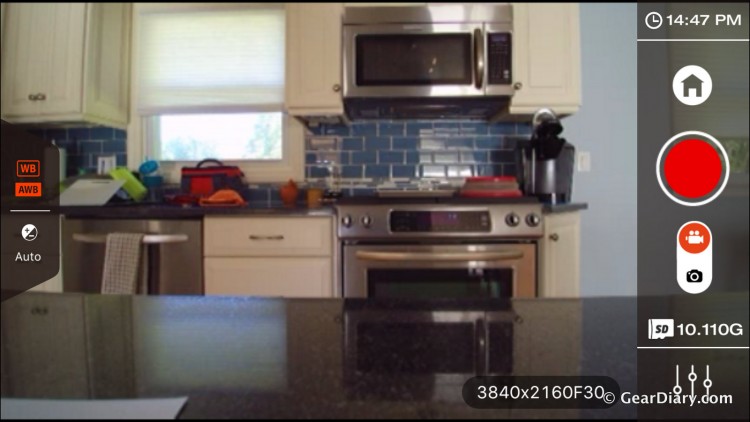 Screenshot from the CGO3 app.

With the included steady-cam, you can detach the 4K camera from the Typhoon and attach it to the handheld to shoot stunning video from the ground. Insert an absurd amount of eight AA rechargeable batteries, connect your smartphone to the CGO3’s WiFi hotspot, and you can view the live video on your smartphone while capturing all the crisp video. It’s a nice way to add value to the Typhoon, as you aren’t stuck only using the camera in the sky. It’s such a powerful camera that Yuneec was smart to give you a second way to use it.

Yuneec’s Typhoon Q500 4K quadcopter is a great option for aerial photographers. Within an hour of setup and getting some time with the sticks, I was able to get beautiful, professional-looking footage with very little effort. I have no doubt that someone who knows more about photography, piloting quadcopters, or both, would find the Typhoon Q500 4K to be the perfect solution. Although I have some structural concerns based on my accident, if the Typhoon is piloted in an open area like it should be, there should be no fear of crashing like I did. While you may see rotors in the frame while making quick turns, that’s really not what the Typhoon is made for. It’s a hell of a lot of fun to pilot and you’ll be excited to get home to pop that microSD card into your computer and check out the footage.

While there are a lot of options out there for aerial photography, Yuneec’s CGO3 4K camera captures crisp, stunning video with no dizzying jiggling or shaking. With the easy-to-use Android-powered ST10+ ground control transmitter, you’ll be sky-high in no time and you won’t want to come down until your battery has run out. 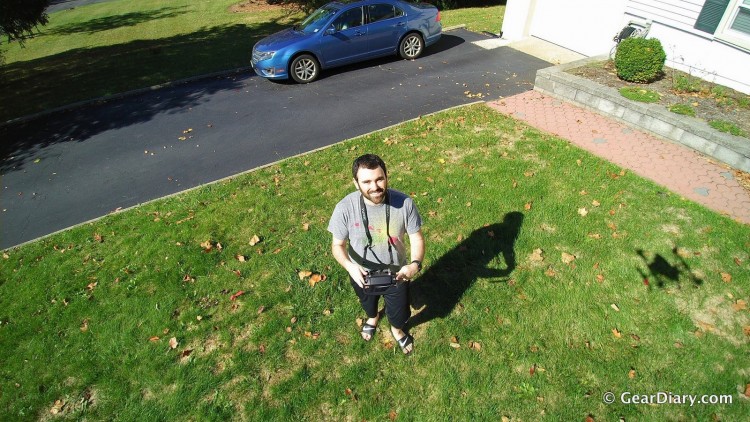 You can purchase the Yuneec Typhoon Q500 4K directly from the manufacturer.

Source: The Yuneec Typhoon Q500 4K was provided to me as a loaner by the manufacturer.

What Needs Improvement: Structural stability can use some work after the frame cracked due to a 10′ fall; Carrying case requires everything to be put back perfectly or else it won’t close.