Amazon has tried for years to build their Appstore into a real competitor to Google Play. Part of that strategy was to give away normally paid apps, and insert ads in place of payment; Amazon helped the developers make money via ads, consumers were able to access normally paid apps for free, and Amazon could build their library of apps.

Apparently, that experiment has run its course, and now the “Amazon Underground” section of the Appstore will be shutting down, according to Liliputing. 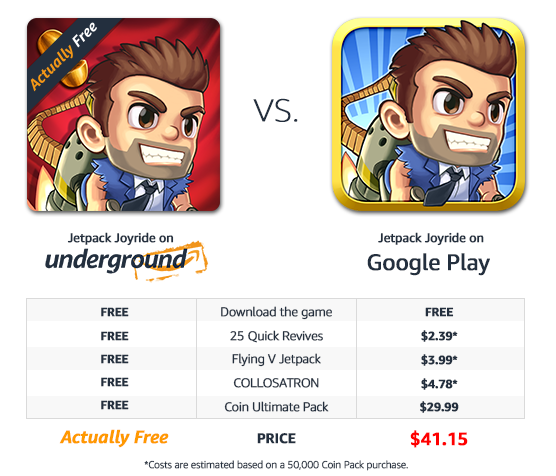 Here’s where the shutdown gets a little bit confusing. Developers can’t submit new apps after May 2017, and the store itself will disappear sometime in the summer. But the apps you’ve already downloaded will work through 2019. Unless you have a Fire tablet, in which case you’ll have access to both the apps and the Underground store until 2019. Basically, if you’re a Fire user, you’re good until 2019, but if you’re using a regular Android device, better download your favorite apps ASAP and/or backup the files, because this summer you won’t be able to retrieve them again. Unless you buy a Fire tablet. Which seems excessive, though, I guess if you have more than $50 worth of free Underground apps, it’s probably a useful investment to pick up the $49 Fire tablet.

I am actually a little bit sad about this. Amazon’s Underground app was never fantastic, but it was a fun way to dip your toe into games you wouldn’t pay for normally. I also liked that if I downloaded an app through Underground and let my son play on it, I didn’t have to worry about him tripping over areas that required payment. Plus, I’ll admit, it came in handy when I needed a paid app for a quick use and didn’t feel like paying for it (in particular, QuickPDF Scanner Pro has saved my butt a few times when I needed to scan something on the fly). This isn’t too shocking though; I can’t remember the last time an Underground app had an update pushed to it in a timely fashion, and the library of useful apps never seemed to grow to anything compelling.

Amazon Underground, like many smartphone platforms, was an experiment that didn’t quite gel with consumers. However, I’m sure Amazon is harnessing all the sweet, sweet data they were able to harvest and will no doubt use it to further polish and adjust their main Appstore!

And remember, if you’ve used or might use an Underground app, DO NOT delete it from your device!