Huawei has just unveiled their latest flagship phones — the Mate 10 and Mate 10 Pro. What’s the biggest feature that sets them apart from all the other phones that are available? Both the Huawei Mate 10 and 10 Pro have the new Huawei Kirin 970 processor, which supports their first AI mobile computing platform. 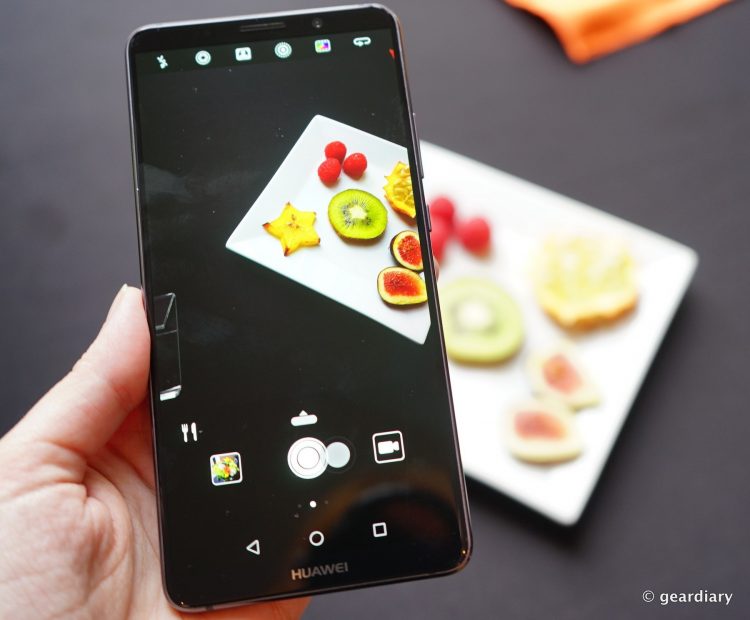 Have you ever wished that your smartphone could learn what you like based on your usage and then adjust itself accordingly? That’s the whole point of the Mate 10 and Mate 10 pro’s AI-powered NPU (Neural Processing Unit).

Delivering the ultimate, intelligent mobile experience, the HUAWEI Mate 10 and HUAWEI Mate 10 Pro feature AI-based enhancements and machine learning that truly understand the way you connect with and experience the world.

Both the Huawei Mate 10 and the Mate 10 Pro feature a “3D Glass Body” which is curved on all four sides; with no sharp edges anywhere to be found, they are comfortable to hold. 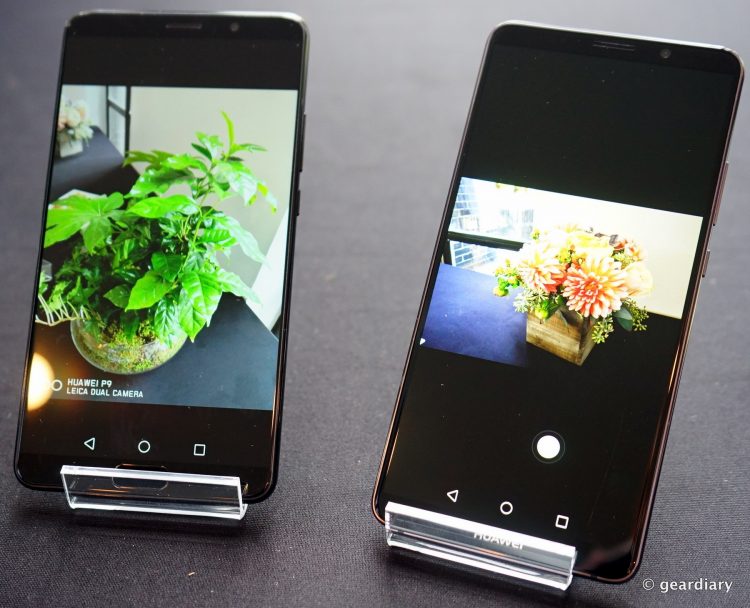 Key features of both phones include: 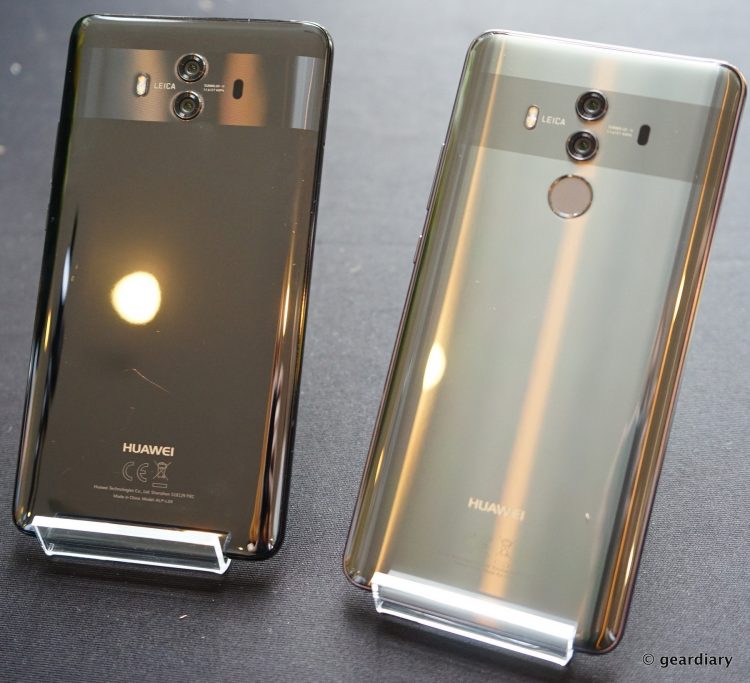 Let’s take a look at the Huawei Mate 10 in hand. If you are still using a wired set of headphones, you’ll be glad to see that there is a 3.5mm headphone jack on the top of the Mate 10. 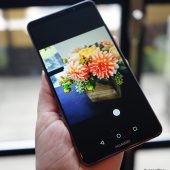 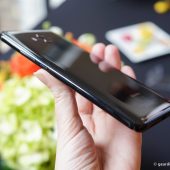 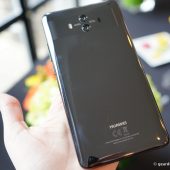 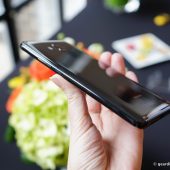 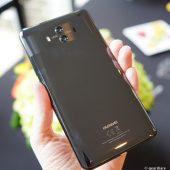 And here’s the Huawei Mate 10 Pro in hand. I really like the clean front, the slightly larger screen, and the fingerprint reader on the back. You do have to give up your headphone jack if you go with the Mate 10 Plus, although Huawei will include a headphone jack dongle for the Type-C charging port. 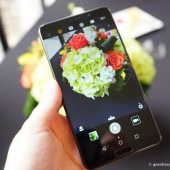 Notice the flower icon at the bottom left of the screen? The AI NPU engine in the Mate 10 and Mate 10 Pro recognizes that a picture of flowers is being taken. 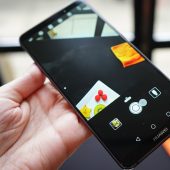 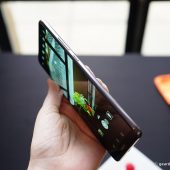 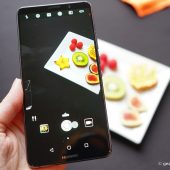 Notice the fork and knife icon in the bottom left of the screen? The Huawei Mate 10 camera is using its AI NPU engine to recognize that the camera is looking at a plate of food. 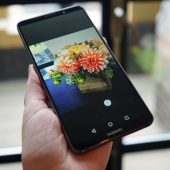 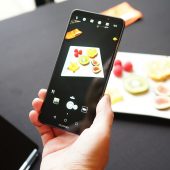 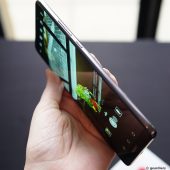 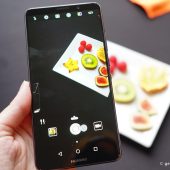 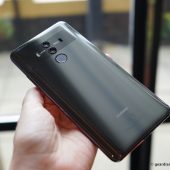 I had the opportunity to fondle the Huawei Mate 10, Mate 10 Pro, and the Porsche Design Mate 10 while we visited Huawei’s HQ in China. I have to admit that I am partial to the size of the device and the brilliant OLED screen on the Pro.

Both phones have a 4,000mAh battery which supports fast charging; Huawei told us that SuperCharge gives the Mate 10 a full day’s charge in just 20 minutes, which is way faster than wireless charging. So with the combination of a huge battery and SuperCharge, they don’t think you’ll feel like you are missing anything. 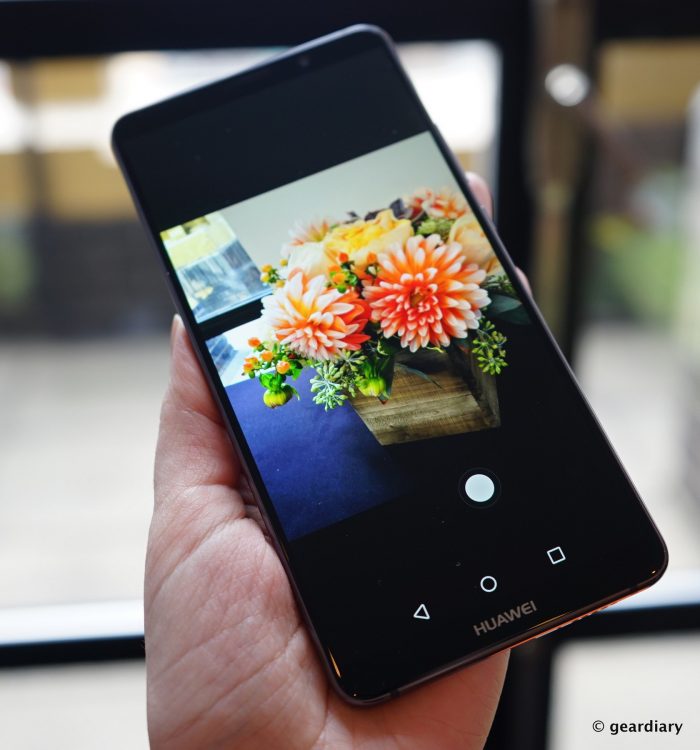 Worth mentioning is that the Huawei Mate 10 and Mate 10 Pro will launch with the all-new EMUI 8.0; Huawei told us that they made the leap from EMUI 5 to 8 to better align with Android 8.0.

Features of EMUI 8.0 include:
• An AI engine to fully leverage the capabilities of the Kirin 970 processor
• An AI Accelerated translator to deliver faster and more accurate interactive translation for a smoother communication experience
• An easy projection feature to connect the new Huawei Mate Series to a larger screen.
• A Smart Screen function for an intelligent split-screen interface to run two apps side by side and support for a full desktop experience – either mirroring or extending the smartphone display, while personal notifications, calls, and messages remain private.

Huawei stressed that the new AI NPU will help ensure that the phone is fast when you first get it, but that it won’t bog down after a year or two of use like most phones will; EMUI 8 is “born fast, stays fast”.

One of the ways that having AI present on your phone will make a difference is in the camera; the camera will adjust in order to help you take your best picture. An icon will pop up when you are using the camera to alert you that the scene has been recognized and is being processed as text, food, stage (if you’re watching a show), outdoor landscape, snow, water, cats (yes, really), low-light, sunsets, plants, portraits, flowers, and dogs. In other words, if you are taking a photo of your sweetheart, the AI engine will direct the camera to set the perimeters for the best way to take a portrait-type photo, versus a photo you might take of an especially amazing dinner or a bouquet of flowers.

Over time, the AI model will continue to evolve, and more and more scenes will be recognized.

Once a scene is identified, the AI camera will adapt the capture parameters in real-time, and adapt the picture post-processing in real time.

One last feature that I should mention is the ability of the Mate 10 or Mate 10 Pro to become your mobile PC without the need for the added expense of a dock. With the addition of a Type-C to HDM or DisplayPort cable, you’ll be able to connect to a monitor.