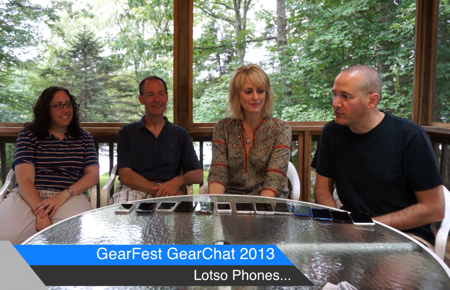 During GearFest 2013 Carly, Mike, Judie, and I — the Editorial Staff of Gear Diary — sat down to take a look at the current lineup of super phones on each of the major platforms. We laid out a dozen or so different smartphones and talked about some of our likes and dislikes. Among the phones discussed are the iPhone 5, the Samsung GALAXY S4, the Samsung GALAXY S4 Active, the HTC One, the Nokia Lumia 928, the Nokia Lumia 920, the LG Optimus G, the HTC One X, the Google Play HTC One, and the Blackberry Z10.

We then turned our attention to the question, “If you could only pick one of these phones, and use it and it alone for the next twelve months which would you pick?” Carly’s answer was fairly predictable, since she got her new Nokia Lumia 928 on a two-year contract. Mike’s and my answer was too, since both of us would stick with the iPhone. Judie, who wasn’t sure if she would be sticking with the HTC One or go to the Samsung GALAXY S4 made her decision. Take a look at what she decided.