There are very few laptop brands that non-tech geeks recognize. They’re aware that Samsung, HP, and Dell make PCs, but the one laptop that evokes an “Oh yeah, those are supposed to be great, right?” is the ThinkPad.

Lenovo has a high bar to meet anytime they update the ThinkPad lines, but the next generations of the X1 Carbon and Yoga sound like they are more than up for the challenge. 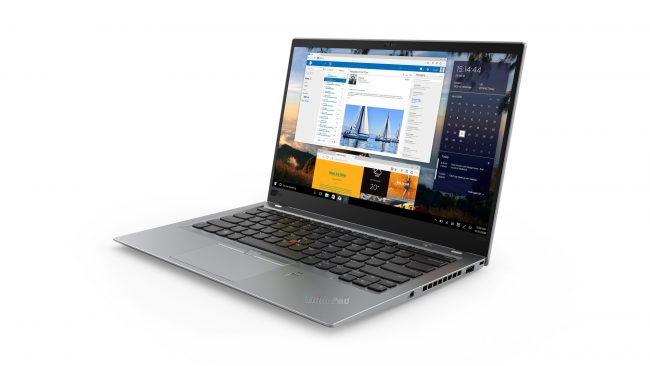 Both the Carbon and Yoga have Dolby Vision HDR and are the first notebooks to feature this screen technology. Dolby Vision has been available on televisions, but adding it to a laptop means you get an even clearer, better work screen. If you’re interested in more of the nitty-gritty details about Dolby Vision you can read up on it here, but in a nutshell, it enhances and optimizes the images you see, making for a much more accurate screen experience. The screens are also extremely bright at 500 nits (for reference, the average laptop is 200-300 nits) That’s obviously fantastic if you’re watching a movie, but the extra detailing is excellent for working as well, and can make you that much more productive, which gives you more time to… watch movies.

In addition, X1 Carbon and Yoga have Amazon Alexa built in, so you can control your lights, play music, and order more laundry detergent by voice command. This uses what Lenovo says are “360 Far Field communication microphones”, and they also allow you to wake the notebooks with your voice from up to 4 meters away. As an added bonus on top of all these features, the X1 line has what Lenovo calls their “Crystal” Windows 10 that is free of extraneous bloatware.

If you’re a heavy traveler, the X1 Carbon should appeal to you; not only is it the world’s lightest 14-inch business notebook at 2.49 lbs, but the carbon fiber chassis makes it extremely tough and nearly unbreakable. Probably not best to drop kick it across a room, but it does give you peace of mind that it is tough enough to handle everyday life as well as water, extreme heat, and icy cold (within reason-Lenovo says it was tested up to 43 deg C [~109F] to -21 deg C [~-6F] and it withstood up to 500ml of water [about 2 cups].)

The Yoga brings the usual 360-degree hinge, plus a ThinkPad Pen Pro. So you get the benefit of the Dolby Vision screen alongside pen input for better drawing and graphical work, all with a machine that offers up to 15 hours of battery life (plus Rapid Charge if you need more juice). It isn’t the lightest at 3.08 lbs, but it’s a solid tradeoff when you consider you’re getting a touchscreen laptop/tablet hybrid with the Dolby HDR screen. The Yoga also stands out against other convertibles as the only one that includes a digital pen as well as LTE-A, so you can work and draw on the go without needing a hotspot.

ThinkPad X1 Carbon is starting at $1,709, while the X1 Yoga starts at $1,889. Both will be available in January, and are worthy additions to the ThinkPad family!

Our CES 2018 coverage is brought to you by Lenovo. All thoughts and opinions are 100% our own.