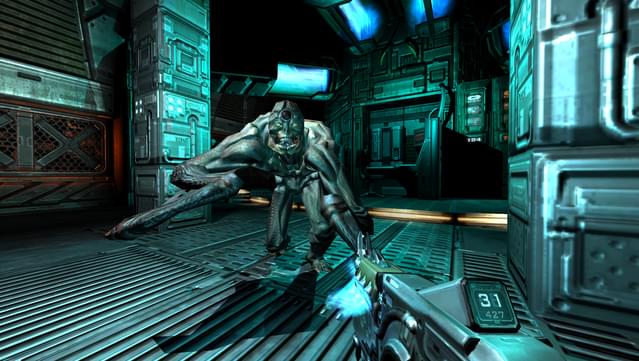 This week is QuakeCon, and aside from the usual huge sales at every PC game shop we got two big surprises! First, on the iOS store the classic DOOM has been updated for the first time in 6 years, released on Google Play for Android, and DOOM II has been released on both stores.

Second, all three original ID Software DOOM games – from 1993’s DOOM through 2004’s DOOM 3 – are now available for the Nintendo Switch on the eShop.

NOTE: These games are rated M for Mature, and while the originals are old enough that the graphics are not shocking, DOOM 3 (shown above) still looks modern and the imagery can be disturbing.

DOOM is perhaps the single most important game in the first person shooter genre, popularizing many things that remain standards and requirements to this day and also introducing millions to the world of ‘FPS Deathmatch’. DOOM II arrived the following year, keeping to the same basic engine and gameplay but with a new sprawling campaign and levels that pushed the PC capabilities of the day. DOOM 3 arrived in 2004 with incredible graphics and a slower-paced survival horror focus – and remains an incredible and thoroughly modern gaming experience 15 years later.

DOOM – First released in 1993, DOOM introduced millions of gamers to the fast-paced, white-knuckle, demon-slaying action the franchise is known for. The game also includes the expansion, Episode IV: Thy Flesh Consumed, and the console versions will allow players to duke it out in split-screen 4-player deathmatch, as well as split-screen co-op.

DOOM II – This beloved sequel to the groundbreaking DOOM gave players the brutal Super Shotgun to bear against deadlier demons, and the infamous boss, the Icon of Sin. The re-release of DOOM II includes The Master Levels for DOOM II (20 additional levels), and the console versions will allow users to play split-screen 4-player deathmatch, as well as split-screen co-op.

DOOM 3 – In this critically acclaimed action-horror re-telling of the original DOOM, players must battle their way through a demon-infested facility before entering the abyss to battle Hell’s mightiest warrior – and put an end to the invasion. DOOM 3 also includes the Resurrection of Evil and The Lost Missions expansion packs.

Here is the re-release trailer: