As many of you know, I am an avid hunter and outdoorsman. I hunt not only for the sport of it, but also because it is a way to feed my family. I hunt with a compound bow as well as a rifle, both with different goals. With my bow, the goal is to get the game as close as possible enabling a 20-30 yard shot. Conversely, I prefer to shoot at longer ranges with my rifle. Usually 200 yards and up, and to facilitate this I use a scope with a ballistic drop reticle. Basically, there are dots under the crosshair that help aiming at longer distances.

While this scope system works at these relatively close shots, many big game hunters must shoot around the 1,000 yard mark. These kinds of shots present a whole different set of challenges. Wind speed, direction and even the curvature of the earth all affect the flight of the round. At these distances, all it takes a slight shake or gust of wind to change a clean kill into a miss or worse than that, a wounding shot.

TrackingPoint has developed a custom rifle and scope combination to make long-range shooting more accurate. Using technology seen in fighter jets and drones, long-range rifle shooters can now confidently and successfully make shots at crazy distances. Below is some info as well as a must-see video.

With the XactSystem, shooters can tag, track and hit their aim point exactly – a shot process referred to as Tag, Track, Xact™ or TTX – because the PGF automatically adjusts for range, temperature, barometric pressure, spin drift, wind input, cant, inclination and more.

The first three TrackingPoint systems will debut at the 2013 Shot Show in January. Here are some pictures from Judie’s meeting with Tracking Point at CES 2013. 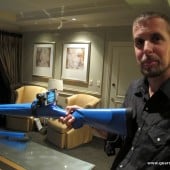 Jason Schauble, President of Tracking Point, shows one of their demo guns set up with the iPhone in place of the scope. 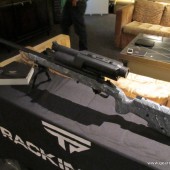 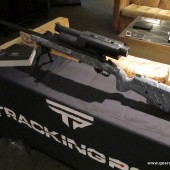 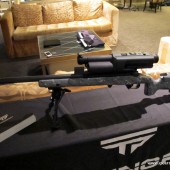 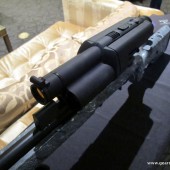 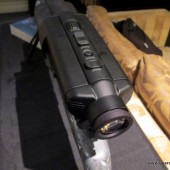 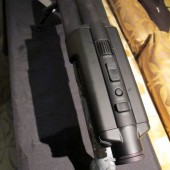 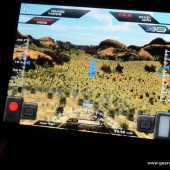 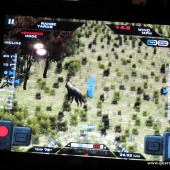 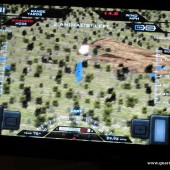 Judie had this to say, after the fact:

I didn’t realize when I met with him that Jason Schauble, TrackingPoint’s President, is a Bronze Star with a V and Silver Star recipient, as well as a Purple Heart recipient for his service in Iraq. I simply found him to be a soft-spoken and interesting guy … but I suspect that’s the typical reaction people have after the fact, once they have met a hero.

You can find more information and sign up for updates on TrackingPoint’s site.