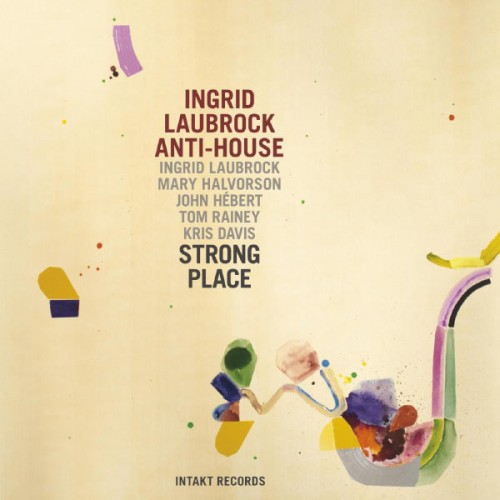 OK, so I am a sucker for any new release featuring guitarist Mary Halvorson. Already a fan of Ingrid Laubrock from 2012’s Camino Cielo Echo from the Tom Rainey trio (yes, also with Mary Halvorson), this was an instant-buy for me. And while the band members were all familiar to me, this was clearly Laubrock’s effort, featuring her compositions and arrangements and a tremendous sense of personal style. So let’s take a look at Ingrid Laubrock Anti-House ‘Strong Place’:

Description:
Ingrid Laubrock Anti-House is an ensemble led by tenor and soprano saxophone player Ingrid Laubrock and also including guitarist Mary Halvorson, pianist Kris Davis, bassist John Hébert, and drummer Tom Rainey. If some of those names are starting to look familiar after reading a few of my reviews, there is a reason. As I noted I am a big fan of Halvorson, and Hébert is one of her frequent bassists (as well as appearing on many other albums), and both Davis and Rainey are big in the New York jazz scene as well. In fact the whole group is composed of active members of the vibrant New York jazz scene.

General Impressions:
The album is the second for the unit, and is focused largely on the musical vision of Laubrock. This vision encompasses both composed and improvised movements, dramatically beautiful and harshly dissonant structures, flowing harmonies and jarring fragments. And it all works extremely well.

Each of the band members is a leader and master instrumentalist, and Laubrock leverages those skills in her compositions. The songs seem written around the unique talents of each member, which makes some of the songs remind me of Charles Mingus compositions in the way the writing is clearly from one person yet flows through everyone else in the band, taking bits of their identity and personality along the way.

People often look at me strangely when I lavish praise on the level of communication in some ‘free jazz’ bands. All they hear is dissonance and discord. Yet as I listen to songs like ‘An Unfolding’ or ‘Strong Place’, I hear the band members listening intently and echoing back to the others and taking statements and twisting them and reharmonizing them alongside the main themes, playing supporting figures for others regardless of their usual role … and sometimes just laying back for a while. Like all great improvisational music, this is an intimate conversation shared between musicians playing at the highest level.

The result is a set of music that is introspective at times, and exploratory at others; mellow and contemplative at one point and jagged and harsh at others; where there are individuals featured but the compositions always remain front and center. And with each repeated listening I learn more and more from the music.

‘Quick Hit’ Song: “Der Deichgraf” – the song opens with Kris Davis playing jagged figures that remind me of Thelonious Monk in some ways and Chick Corea in others. The rest of the group joins in, and the structure takes on one of my favorite movements – the piano is playing intricate lines while the rest of the band lays down a harmonic structure in a stop-rhythm pattern that carries you from pulse to pulse. And just as the excitement builds, the song simmers down into Halvorson playing a quarter note line so solid and floating that when an eighth note couplet arrives it is a surprise. The rest of the band joins back in after a while and the defying of standard roles and structures continues right through to the end.

Would I recommend?: Absolutely! This is one of those albums I know I will be listening to all year long. I cannot predict if it will make my Top 10 list as there is so much good music slated for the year, but with this amazing array of talented artists I have been thrilled to experience new things with each repeated listen.

Suggested audience: Um … let me just be honest. Most people won’t like this music, that is just a simple reality. The subset of music fans who like jazz is small, the subset that likes modern instrumental jazz is smaller, and those who like avant-garde music is smaller still. But if you love the music of Mary Halvorson and Anthony Braxton … you will love this album as well!

Here is video of Ingrid Laubrock Anti-House performing live in 2012: