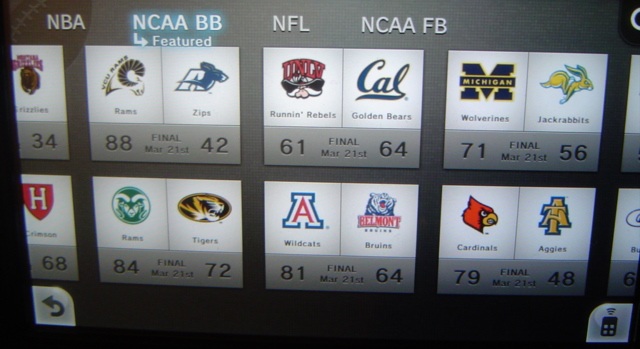 March Madness on the Wii U TVii Service is a brand new experience based from the Sports section. The recently released TVii service, exclusive to the Nintendo Wii U, allows access via the GamePad to a television and other entertainment content, was not originally available at Nintendo Wii U

‘s November launch, but it’s here just in time for March Madness. This free TVii service comes pre-loaded into the Wii U does not require any extra equipment and functions like a web browser. User can browse and perform familiar actions on the GamePad touch screen while watching other programs on the television.

The TVii service includes a simple interface menu of favorites, movies, television, sports and search, which then breaks down into programming that is featured, live (currently on), and recommended plus users can view a helpful grid (traditional TV channel guide).

Users navigate through the service using the Nintendo Wii U GamePad, including as a remote with basic functions and special features. Users can watch shows through their television provider (satellite, cable, etc.) or use streaming services (Netflix, Amazon Instant Video, Hulu Plus, etc.). Users can also view special information on the Gamepad about a program playing on the television – a nice dual-screen option. The sports programming, such as NCAA basketball action, includes live scores and statistics.

The TVii service include tools for linking to social networks, including Twitter and Facebook as well as Nintendo’s own Miiverse where users can comment during watching shows or any time. This free TVii service just requires the Wii U and is currently available in the U.S. and Canada with more nations in the works. Set up include creating a profile, selecting the appropriate service provider and television package based on the zip code.