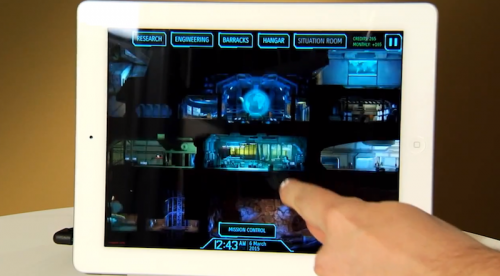 Last October I reviewed the excellent PC game XCOM Enemy Unknown, noting that the game offered an incredible depth of gameplay and strategic options. So I am thrilled to learn that XCOM Enemy Unknown coming to iOS devices this summer.

In an article at Polygon, lead developer Jake Solomon talks about how the game released for PC and consoles makes a perfect fit for iOS devices – and in particular the iPad. You will also be able to play on your iPhone and iPod Touch, though I am sure there will be limits to which generations of devices will be supported.

He states that we will get a ‘full AAA game port’, and indicates that the only exception is the number of maps. Everything else is pure XCOM – something you can check out in the video below. Solomon said that the port was under development a the 2K China studios even before last October’s release of the PC and console version.

I completely agree with what Solomon says about it feeling natural to control the game using an iPad – on the PC you are dealing with point & click situations throughout. Moving soldiers, rotating the camera, panning around the map, choosing tactics and so on are natural uses for the touch-screen.

2K Games notes this will be a ‘premium priced release’ but without further context. My assumption is that will mean more than $9.99 – probably somewhere between $10 – $20. And based on what I have seen and heard – and how much I enjoyed the original game – it will be worth every penny!

Here is a full video preview from Solomon and 2K Games: