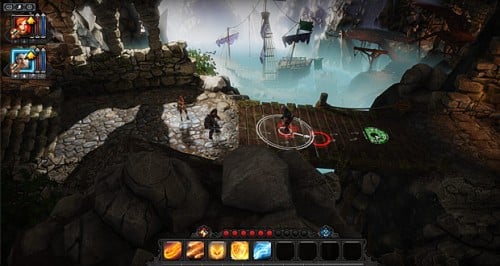 Increasingly developers are not just looking to Kickstarter for full funding of a project, but also to help get specific features into a game, deliver multiplayer or extended art or something else. Developer Larian Studios looked at what they could do themselves, and decided that with a successful Kickstarter project they could realize all of their goals for the game. Personally this was an ‘insta-back’ for me, as Divinity Original Sin Launches Kickstarter Campaign!

URL of the Project: http://www.kickstarter.com/projects/larianstudios/divinity-original-sin

•Divinity:Original Sin is an Isometric cRPG.
•You can play in single player mode but also in cooperative multiplayer mode
•It’s a real epic CRPG so even in multiplayer, you’re engaging in much more than just combat and item fever. A nifty cooperative dialog system, a highly reactive world, a deep character development system and plenty of choice and consequence situations see to that.
•You can create your own RPG adventures with our powerful RPG editor and share or play them with friends
•Combat is very tactical. It is turn-based and features things like skill and spell combos, attacks of opportunity, action points and much more.
•Exploration is greatly rewarded.
•You can develop your character(s) to fit your playstyle using our classless skill and stats system.
•There are countless item interactions and item combinations waiting to be discovered.
•No Divinity game is complete without music composed by the brilliant Kirill Pokrovsky.

Larian Studios has created one of my all-time top 10 games with Divine Divinity, a deep and massive RPG with exciting combat, great storytelling, humor, complex characters and great music. Divinity II wasn’t quite as good but remains one of the better RPGs of the last half decade. Now they are working on a new game, an isometric turn-based RPG featuring single and co-op gaming with a two-player hero system. The game looks to bring all of the promise of the earlier games and even more fun possibilities.

Divinity: Original Sin is a turn-based isometric RPG set in the Divinity universe which was introduced in Divine Divinity and expanded upon with its sequels Beyond Divinity and Divinity II.

In the game, you control a party of heroes and guide them on a quest to learn a forbidden magic called The Source. This powerful magic was outlawed many centuries ago by the Council of Seven, the rulers of Rivellon, for it is written that from Source the lord of Chaos will spawn. Today, Source magic has been used to overthrow the Council. It’s up to our heroes to save the Council and to do this, they’ll need to uncover the mysteries of the Source and of those responsible for cursing the Council.

Now as to how you do this, that’s entirely up to you: this game is extremely non-linear and rewards exploration. There are many different ways in which you can complete the game successfully.

Here is an updated look at the game: