With compact tablets like the Asus Nexus 7 and the iPad mini rapidly gaining popularity over larger 10″ models, Kogan has updated their range of slates with a new Agora Mini 8″ model. 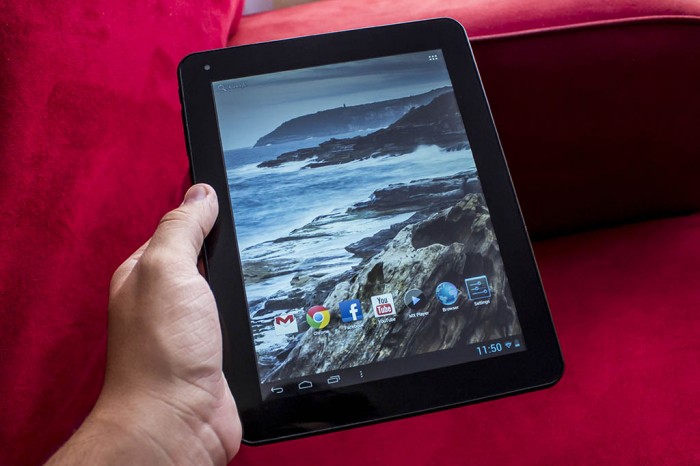 Kogan’s big claim to fame (as often is the case with Kogan products) is first and foremost its low price: AU$119 for the 8GB model, and AU$129 for the 16GB model. This significantly undercuts the 16GB iPad mini’s AU$369 starting price, as well as being almost half the cost of an Asus Nexus 7 (16GB, AU$249).

Previous tablet entries have proven the adage “you get what you pay for”, but the Agora Mini 8 starts to break the mould.

Straight out of the gate the faster processor and extra RAM make this a far more interesting device than its predecessors, which were quite laggy and underpowered. 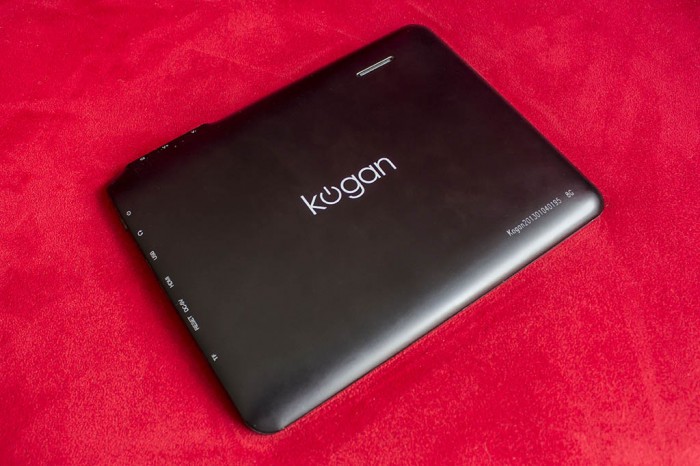 The plastic shell of the Agora 8 feels surprisingly sturdy.

The body of the Agora Mini 8 is all plastic, with the display dominating the front as usual. The face is devoid of a home button, replaced with on-screen controls. Up top is where most of the action happens, with the power button, headphone jack, microUSB, miniHDMI, AC power and microSD slot fill the space. 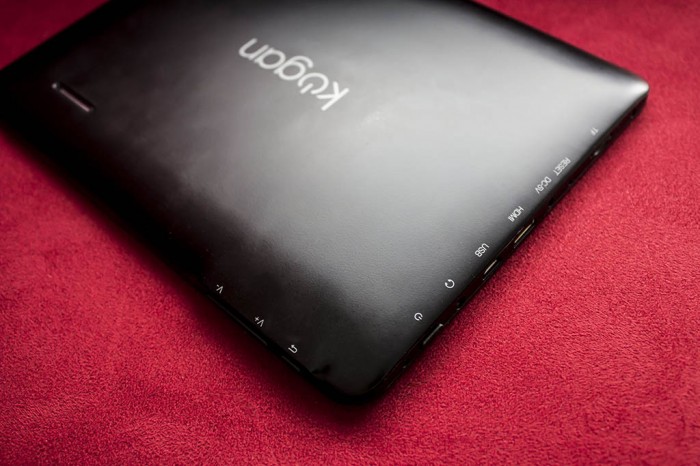 All the ports line the top of the Kogan Agora Mini 8.

Somewhat strangely, the Agora Mini 8 can be charged by either microUSB or via a separate AC connector.

Along the left side of the Agora Mini 8 are the volume buttons as well as a back key.

Powering up the Agora 8 on for the first time reveals the 1024×768 IPS display. While it certainly isn’t going to win any awards for quality or clarity, it’s most definitely better than any tablet display I’ve used in its price range. 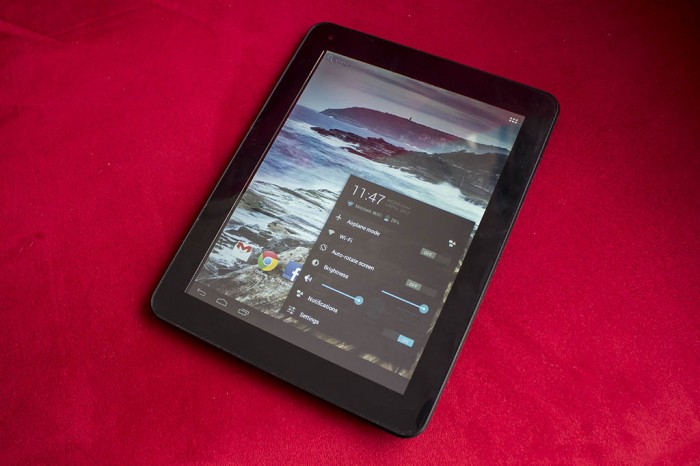 Thanks to being an IPS panel, viewing angles are good, and the display doesn’t invert colours when looked at from even wide angles. There is quite a large gap between the panel and the touchscreen, so images and text don’t exactly “pop” off the screen, and as a result the display does wash out at extreme angles.

While the display washes out, it doesn’t invert like many cheap tablet displays.

Like the iPad mini, the Agora Mini 8 benefits slightly from squeezing its 1024×768 resolution into a smaller 8″ panel, but neither look as crisp as a Asus Nexus 7. The choice of a 4×3 aspect ratio also tends to favour reading and photos over widescreen movies.

The brightness levels are adequate, but do make things difficult to see in direct sunlight. 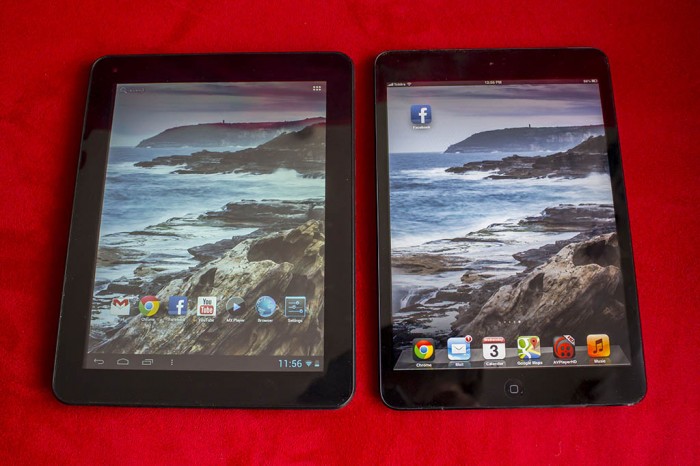 Performance is an area where previous Kogan tablets have struggled, often offering a stuttery experience, for the short time the battery would hold out.

Boosting the specifications has helped a lot, along with shipping the Agora Mini 8 with a clean build of Android 4.1.1 Jelly Bean. Since the Agora Mini 8 is likely to never see an OS update, having one of Google’s latest versions pre-installed is significant.

During several weeks with the Agora Mini 8, I haven’t experienced any more jerky screens or crashes than any other Android device I’ve tested. I have had it freeze on me once over the past few weeks, but otherwise the Agora Mini 8 has been quite stable. Combined with its decent screen has been nice to use. 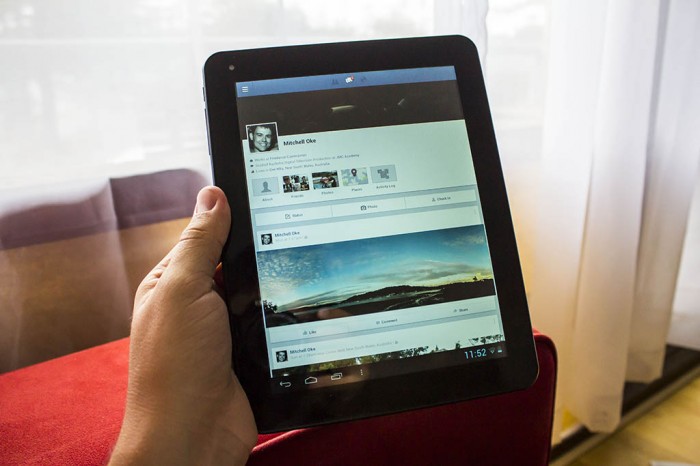 Coupled with tethering to a smartphone, it’s a great way to surf the internet and read at a coffee shop, or work through a bulging inbox.

The Google Chrome web browser is notorious for its performance issues, though recent versions have improved significantly. It works very well on the Agora Mini 8, keeping in sync with the browsers on my desktop, notebook and Nexus 4.

Video playback was smooth, and with many excellent video players available in the Google Play store, you should be able to play almost any kind of media.

The microUSB port supports USB Host mode, so you can connect up USB memory sticks and other peripherals. The coolest use I found for the feature is the ability to control my Canon DSLR via the tablet, with a live-view image on screen. Some very clever developers out there. 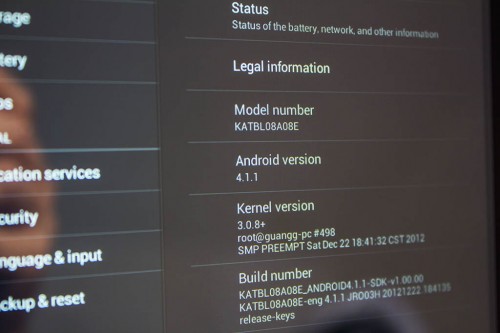 If the Agora Mini 8 has an Achilles Heel, it’s the battery life. A two-hour movie with WiFi on and brightness at max was enough to dispense with 75% of the 4300mAh battery. At anything lower than maximum brightness, the Agora Mini 8 display is difficult to see in a lit room, so dropping the brightness to eek some more usage out isn’t particularly realistic.

During more casual usage, including some web browsing, email and Facebook, you’ll be able to stretch that out to around 4 hours. These times are hardly going to challenge the big names, but considering the price tag it’s somewhat expected.

Price tag is where the Agora Mini 8 ultimately bests potential rivals. At $119 for the 8GB model, it really is in impulse-buy territory. As a cheap way to get your kids a tablet, the Kogan Agora Mini 8 is a very compelling device. With plenty of free games in the Google Play store, expandable memory for loading up more music and videos, you can give them an iPad style tablet, for less than an iPod Touch.

The Kogan Agora Mini 8 Android Tablet can be purchased directly from the manufacturer.