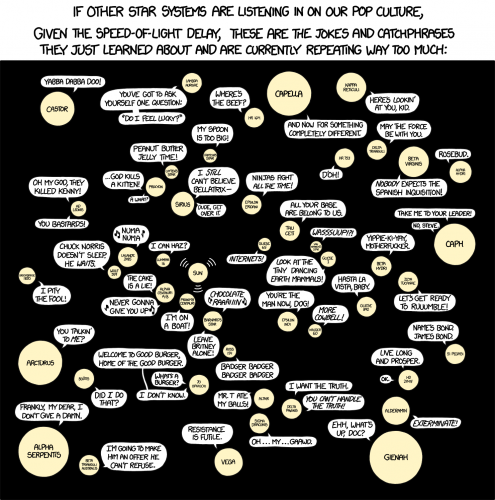 I’m just this guy, you know? I’m a CNU graduate with a degree in physics. Before starting xkcd, I worked on robots at NASA’s Langley Research Center in Virginia. As of June 2007 I live in Massachusetts. In my spare time I climb things, open strange doors, and go to goth clubs dressed as a frat guy so I can stand around and look terribly uncomfortable. At frat parties I do the same thing, but the other way around.

This is a man after my own heart. I’m enough of a science geek I get the twisted science-oriented humor in his strips, as if they were inside jokes. One that caught my eye and gave me a good chuckle was the image above, titled “Interstellar Memes”. Often playing the amateur astronomy looking up at the night sky I’ve often wondered what, if any, of our transmitted media emanating from Earth has reached other star systems (ignoring the tedious inconveniences of initial signal strength and attenuation, solar and extra-solar electromagnetic interference and such). Interstellar Memes nicely correlates the age of certain well-known (and maybe not-so-well-known) phrases with the approximate distant stars they would be reaching.

For example, “Yabba Dabba Doo!”, from the Flintstones, is next to the star Castor (trivia: Castor is actually a quadruple star system), in the constellation Gemini. What does Castor have to do with the Flinstones? I’m glad you asked, because Fred Flintstone uttered his well-known shout 53 years ago, which just happens to be the approximate distance of the Castor system. Traveling at the speed of light it has taken Fred and his family, piggy-backed on a carrier wave in the 56-890 MHz electromagnetic spectrum that long to reach Castor.

For a larger version of the graphic above, you can go to xkcd’s site here. If nothing else, this might be an interesting party game to test your pop culture trivia knowledge. Doubtless it wouldn’t be much of a challenge for the cast of “The Big Bang Theory”, and you know they would argue the finer points of signal attenuation over long distances, gravitational lenses, proper motion of stellar bodies and so and so forth, but for those folks lacking neuroses it might just be fun. Be sure to check out xkcd’s other strips as well. They nicely demonstrate that Jack Kirby illustration style isn’t necessary to drive home a point or make you laugh.