Posted By: Michael Anderson May 20, 2013
ShareTweet 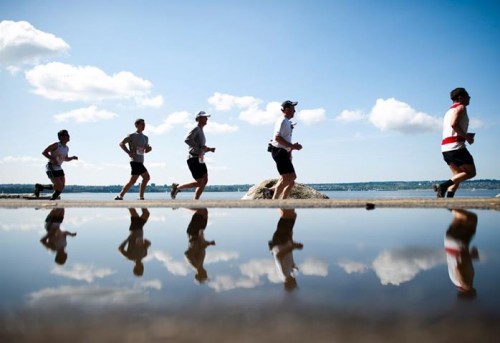 I remember being about 20 miles into my first marathon, and the pacer making a very big deal about breathing deeply and in general watching our breathing closely. Even then this was not news – after getting myself into ‘fuel trouble’ on my first half-marathon, I started to pay attention to a whole bunch of running-related things such as nutrition, hydration, tapering, and breathing. Someone had mentioned to me that one of the best ways to manage breathing was to pace it so you are breathing in and out in sync with steps, and that you should spend more time getting air in than sending it out.

Little did I know this was ‘a thing’, and was called ‘rhythmic breathing’. A renowned coach named Bud Coates had worked on a system based on a ‘balanced’ 3:2 ratio of inhale to exhale. Here is what he says about why it works better than an even 2:2 cycle:

Many runners develop a 2:2 pattern of breathing, meaning they inhale for two footstrikes and exhale for two footstrikes. Some breathe in for three steps and exhale for three steps. Both have the same result—your exhale is always on the same side. Breathing patterns that extend the inhale will shift the point of exhalation alternately from left to right or from right to left, from one side of the body to the other. The singular point of all rhythmic breathing patterns is this: Exhale on alternate footstrikes as you run. You never want to continually exhale on the same foot.

You can read the entire article here or check out the book here (Amazon has it for $9.99). I am not selling it nor do I get anything from any sales, I just enjoyed the article, and as for the book – the comment about the beginning being worth $1000 and the rest being worth $0.01 is not far off.

I call this breathing approach ‘balanced’ because it is right in line with everything else I have been reading – you want to balance the forces and pressures felt all over your body. Most roads have a ‘crown’ – some rather significant – and running the same way on the same roads with the same crown places an unbalanced set of forces on your body that can end up in injury. The same is true if you run long distances with your phone or mp3 player on the same arm and headphones always wired along one path. Your body deals with this by an unbalanced compensation.

As noted in the article and book — the same thing happens with your breathing. Your body rhythms work with your motion, breathing, and heart rate. And if you are constantly starting your inhale cycle as you land on one foot, that will cause stress on that foot – and can lead to injury.

I had immediately adopted the 3:2 system for all but the steep hills I run, and find it helps me in a couple of ways — it helps regulate my pace, and it also helps with my focus. If I am focused on breathing, I am not thinking about the bills I need to pay, or how to present the data from the experiment we just finished, or what the kids have on the schedule next weekend … I am just ‘in the zone’ with my breathing.

Of course there is more to it than just 3:2 most times and 2:1 when it gets strenuous —  you need to work to keep those lungs functioning. That is why the pacer also pushed taking large, deep breaths and circling arms over your head. Once you get past 20 miles, your body is in a different zone, and you want to make sure you retain all of your lung capacity in reserve to close out the race strong!

Oh – one thing Coach Coates talks about is that this technique will make you faster. I know I have gotten faster in the time I have used it … but I have also done things with my posture, stride, and any number of training techniques such as intervals, fartleks and so on. So I have nothing to say from a quantitative basis on what impact this might have, but proper breathing is certainly important to maximum efficiency.

What breathing techniques do and don’t work for you?