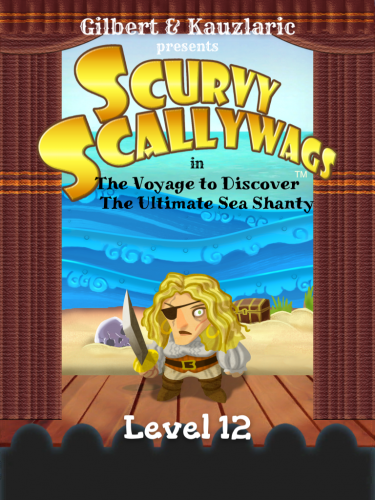 Puzzle Quest is one of my all-time favorite casual RPG games. With a cool story, integrated RPG level-up mechanics and fun match-3 gameplay you were always challenged but in a way that worked for quick-hit gaming on the go. It is a formula that many have attempted to imitate with varying degrees of success. The latest game making the attempt is Scurvy Scallywags, which has the distinction of having some major names at the helm. Let’s take a look and see how they did!

Description:
Here are some of the features:
* Universal App & iCloud for pirates on the go! Pick up exactly where you left off on any device.
* Choose from 100 hats, shirts, swords, heads, and more to customize your pirate.
* Use special skills to dodge enemies, collect extra loot, or win epic boss battles.
* Build countless (okay, nine) different ships that improve your pirate’s buffs and stats.
* Complete side quests and 50 GameCenter achievements — you’ll be plundering for days.
* Great replay value! Randomly generated islands keep the game going after completing the Ultimate Sea Shanty.
* Share your exploits and pictures of your pirate with built-in Facebook and Twitter. 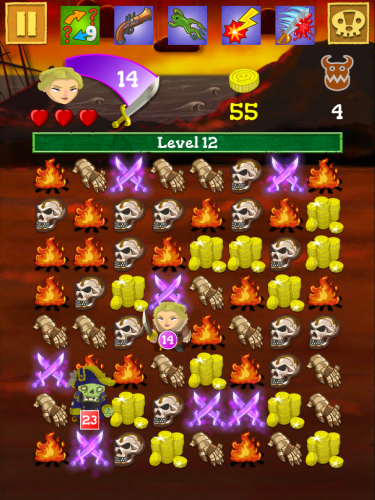 Scurvy Scallywags is the latest game from designers Ron Gilbert and Clayton Kauzlaric. Those two are responsible for the hilarious stylized action-RPG Deathspank (and its sequel), and Gilbert was behind some of the classic LucasArts adventure games such as Maniac Mansion and the first two Monkey Island games, as well as founding Humungous games are releasing some of the best kid-oriented adventure games ever made. With names like that behind the game, expectations were high!

Fortunately, our trust was well placed.

Before even getting to the game, let’s look at the de-evolution of the Match-3 game genre. It started (or at least hit the mainstream) with Bejeweled and a simple premise – you swap blocks to make matches of 3 or more gems. There are special things that happen when you match 4 or 5 gems, or when matching multiple sets and so on. When you make a match the blocks collapse, which reorders things so you can keep making matches. Bejeweled was released almost exactly 12 years ago in May 2001, and that same gameplay style has remained in place ever since. 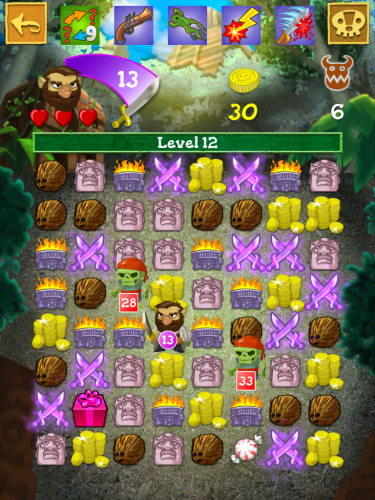 Which brings us to Scurvy Scallywags. This is a game with story, characters, skills, powers, level-ups, and pirates! You start off by choosing a pirate by gender, modifying appearance and outfit, and then starting off your game with a ‘starter’ ship. You are on a quest to discover the ‘Ultimate Sea Shanty’, but naturally need to defeat your ultimate enemy by discovering the verses of his song as you explore the seas.

Sound silly? It sure is! The graphics are a mix of paper-doll animated scenes and cartoony images mixed with fun and stylized match-3 battle screens. As you explore you will find areas where you simply collect things, and others where you need to defeat enemy pirates. You will also pick up side-quests to gather items, and come across bonus items on the combat board.

But the thing that will keep you coming back is the match 3 gameplay. At the core level you are playing a similar system to Bejeweled or Puzzle Quest – but you will quickly learn some important differences! The biggest difference is that you and your enemy are actually ON the board – and whoever has the greatest combat power wins. To gain power you need to match attack icons. Matching gold gives you coins, and as you work your way around the board you can grab items and prices and more. 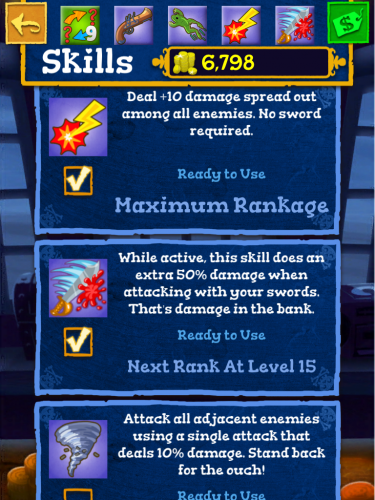 Move around? That is right – because rather than just matching gems or even performing attacks by matching gems like in Puzzle Quest, here your pirate is on the field, as are your enemies. And as you make matches the characters move along with other gems. An attack happens when two enemies are next to each other … and as noted whichever character has the highest attack points wins. You increase your attack by matching swords, which is helpful because quickly you are dealing with stronger enemies and even multiple enemies on the screen.

Fortunately you also get the ability to unlock powers such as shooting an enemy with a pistol and getting a free move to escape combat. These have recharge times or are single use items, but you get to buy more with the gold you collect in the game. Speaking of which, one of the best things – no in-app purchases. Your gold is entirely virtual, no way to buy gold using real cash. You just need to earn it by exploring. 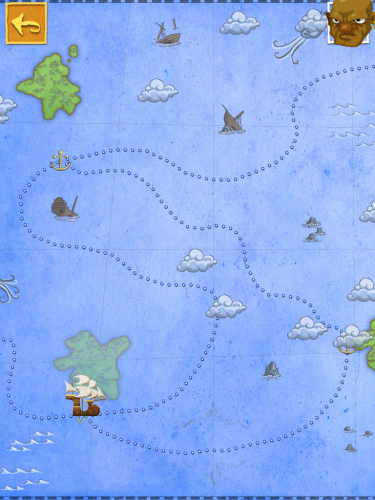 Because of the simple Match-3 system, you will be able to jump right into playing the game! Even though the combat is much more complex than a simple match-3, the core ideas are there, and the learning is layered in with the gameplay as you make progress.

The graphics and sound and presentation are all stylized and distinct, which shouldn’t be surprising to anyone who played Deathspank (I highly recommend it!). Performance is excellent on iPad and iPhone, no real need for the larger screen to enjoy the fun.

Would use again/recommend?: Definitely! I had an absolute blast playing this, as it was a great twist on the match-3 genre. The combination of a fun story, stylized presentation, excellent combat system and bargain price with no in-app pull makes this one of the most easily recommended games I have played all year.