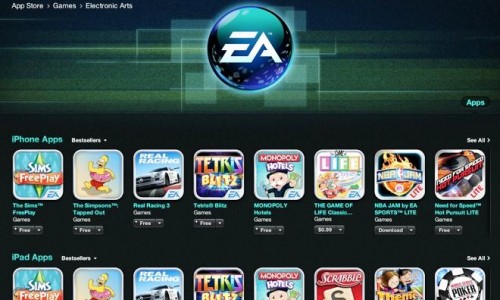 Electronic Arts (EA) launched the Origin content delivery service called Origin in 2011 to combat Steam in the exploding digital game delivery market. The big concern apparently wasn’t about games themselves as much as the highly profitable in-game DLC purchases. EA could deal with paying a chunk to market the main game – after all they’d been doing that with GameStop for ages. What they wouldn’t do was sacrifice any of the DLC profits – and that has proven to be a very strategic decision, only not related to Origin.

In the most recent earnings call, Electronic Arts announced that the single most profitable retail outlet for their games … was the iTunes App Store. Not only that – the top three games are all FREE! Think about that for a second – a great little game like Real Racing 3, which is free to download and play, is making EA gobs of money.

How is this possible?

It is possible for the reasons that Valve and EA battled over games being in the Steam store – the era of in-app purchases and micro transactions is in full swing. While giving a game away for free, many developers realize greater revenue through in-app purchases than if they charged for the game itself!

For example, if you look at my favorite of the top-selling EA Games – Real Racing 3 – you can very easily find yourself making tough choices about spending real-world currency in order to keep going, something highlighted in most reviews, including 148Apps noting that you could spend $503 just to buy all of the different cars in the game!

Most people won’t pay nearly that much, but it is easy to end up dropping a few dollars to buy currency to get yourself a cool new car to win more races to pay for repairs and upgrades and so on. The game is also constantly sending you notifications about ‘limited time sales’ on cars and currency – so you can suddenly get TWICE as much in-game currency for your money. These are tempting things, and most people will drop a few dollars that way to maximize enjoyment. Because Real Racing 3 is a blast – and if a game is fun, and you lower the cost of entry, people are more willing to make small purchases than if you charged in the first place.

EA said that they made $90 million this quarter through mobile gaming, but didn’t break it down further. Most overall estimates have iOS developers seeing revenue streams about 5 times larger than on Android, but since EA has most games available for both platforms I am sure they are happy either way.

The other big news, of course, is that EA is simply not seeing a ton of revenue through Origin. The thrust of the service was to compete and win against Valve’s Steam … and that simply hasn’t happened. Steam continues to dominate the market, and even gets tremendous gamer goodwill in spite of always-on DRM, requiring a game client, and other things gamers tend to dislike. Origin is hated only slightly less than Microsoft’s XBOX Live for Windows, which would definitely dominate a ‘gaming Razzies’ if such a thing existed.

EA has struggled in recent years, with a stock value that plunged again in 2012, back-to-back ‘Worst Company in America’ awards, and a reputation for being cold-hearted to employees and treating gamers like ATM machines. Perhaps they can find some success – and perhaps even earn back some goodwill – through mobile gaming. Considering the number of franchises they own, and the resources they can bring to creating new games … we can only hope they will succeed.