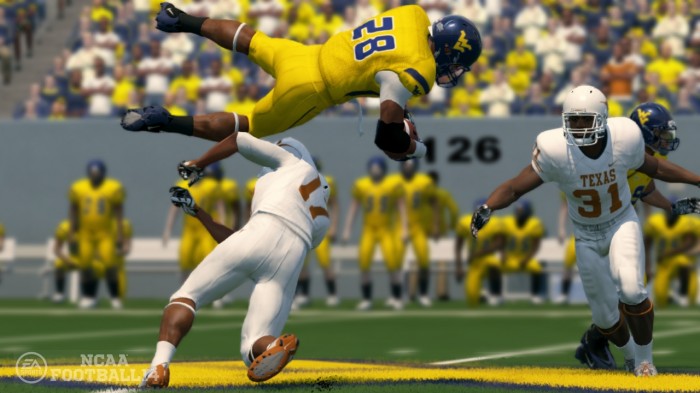 NCAA Football 14 unlocks the unpredictability and innovation of the college game. The new physics-driven animation system and a completely re-engineered spread and read option game influence the outcome of every moment allowing you to stay true to the game.

One to four players can enjoy the off-line game modes while players can also tackle the two versus two online modes. Players get expanded control and customizable realism with all the appealing aspects of college football.

The bulk of new NCAA Football 14 game features/elements appear in the Play Now, Ultimate team, Dynasty, 2013 season modes and the main settings. This year the in-game currency is coins while the experience tallies in points. No local multi-player season play while supplemental selections include answer HQ, EA Sports Extras, My NCAA Legacy, and the Nike Skills Trainer, which helps players develop or boost their skills (e.g. passing, running, hot routes, etc.) with rewards for great performances. This special training mode serves as the tutorials for essential actions, which can get very complicated with new option packages.

Approximately 500 new video vignettes add more variety and excitement. The main menu music gets a bit too repetitive while players can create their own music soundtrack featuring familiar songs like “Zombie Nation” and “Seven Nation Army”.

Players can begin the regular game modes knowing that their greatest performances can be forever etched in history with the gameplay recording and uploading feature, which lets players choose, create and save their own highlight videos (maximum of six) from an automatically archived list at the end of each game. Highlights can be automatically archived Play Now, online Head to Head, Mascot, Dynasty, online Dynasty, Road to Glory, and Heisman challenge (located in Road to Glory). 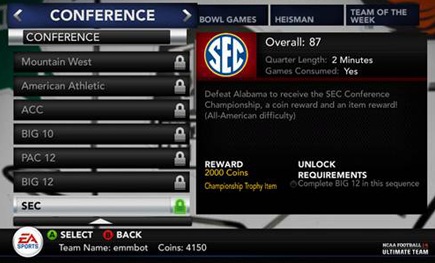 This year players will get a new feature that will surely permeate across several EA Sports games like Game Face did – Ultimate Team. The Ultimate Team mode elevates the nostalgic appeal by offering players over 2000 past players like Bo Jackson (a nice free pick-up), Tom Brady, Herschel Walker, Arian Foster, and Barry Sanders.

In Ultimate team, players can battle the CPU or go head to head in Solo Challenges. Players can even buy and sell their way to success or at least enhancement with special card pack purchases and items in the Shop and Auction House. 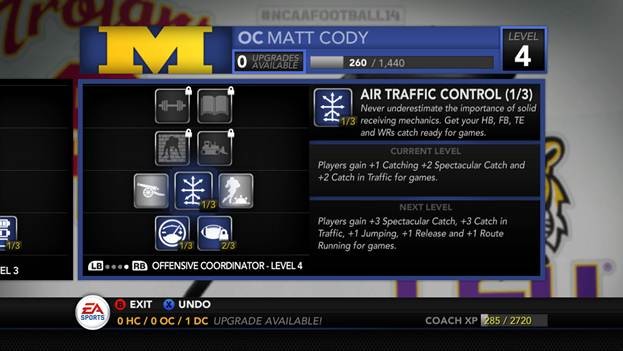 Going deep for an all-around in-depth experience? The Dynasty mode now shines the field spotlight on the coaches who now have new upgradeable skills and skill trees using experience points. Even offensive and defensive coordinators can level up. These skills predictably transfer into better performances, especially in clutch situations as players can mix and match 36 different upgradeable skills. Players can also import Teambuilder into this Dynasty mode (also Road to Glory).

The largely unchanged Road to Glory mode offers an in-depth high school football experience with simplistic play calling and simulation options. Road to Glory, which also includes the Heisman Challenge, allows players to sim/skip through plays and games. Players can even skip to signing day and take a huge chance at which three schools would sign them. It’s best to play through at least half the season to reach a decent standing for the college signing/drafting process.

Want some simplicity? Pick-up and play fans can try the 1-button, practice and mascot mash-up game modes. Players always have options to play the game as they like including the Play a Season mode that does not include the recruitment and other off-field activities.

The upgraded recruiting and team/game management skills activities are simpler, faster and conveniently available through an iPhone, PC or iPad. Distribute values to players from the decided amount then make adjustments (if needed) and eventually offers to get those valued prospects. Players can also use the EA Locker feature for remote roster sharing online through PlayStation Network (Xbox Live for Xbox 360 version).

The impressive new Infinity Engine 2, which debuted in last year’s Madden NFL 13 game, enhances the game even more with game changing events. The Force Impact System offers more potential for jarring hits, realistic movements, and quick cuts on offense and defense.  Other related features in this new graphics engine include running mechanics, player impacts, speed boosts, and stumble recovery where players can settle and lunge forward or recover their balance to get extra yards. Players should pay special attention to teammates because “friendly fire” interactions can be a big detriment, especially in key moments. A few glitches and clipping still exist, but are very minor like an obese coach’s arms going through his body or a kick returner that still runs when player move him to the back of the end zone.

Get in the open field and utilize the new combination moves when running to evade the defense. Tip toeing receivers know the sidelines well, while the defense can hit low or high. Choose from over 30 new option types. The option has always been a less popular play call, but even inexperienced players can succeed with optional visual options that associate the button with the on-field player option. It’s more exhilarating to succeed when performing these complex plays.

NCAA Football 14 offers a gold mine of options and customizations for players to pursue plus endless learning opportunities that bring more excitement and enhancement to college football. This game also offers endless tools and methods to process, assimilate and utilize learned information in fun, exciting ways.

Players should note the jersey numbers and positions of high-ranking college stars including Arizona’s Ka’Deem Carey, South Carolina’s Jadeveon Clowney, Texas A & M’s Johnny Manziel, Ohio State’s Braxton Miller, Oregon’s De’Anthony Thomas plus Alabama’s A.J. McCarron and C.J. Mosley. Players’ real names and exact likenesses are not used in the game because actual usage of a player’s real name would be in violation of the NCAA’s policy regarding student athletes. 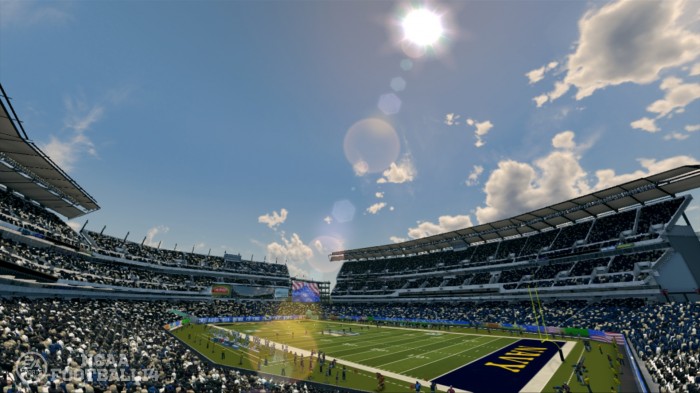 Developed by Tiburon and published by EA Sports, NCAA Football 14 features ESPN and requires only 21 MB drive space. This highly recommended game definitely warrants a purchase for all ages of players and an update for seasoned veterans for the new rosters, uniforms, stadiums and, most importantly, conference realignments, which are hard to replicate in previous versions. The fan voted former Michigan quarterback Denard Robinson appears on the NCAA Football 14 game cover.

NCAA Football 14 also includes $10 off coupon for merchandise on fanatics.com (no minimum order) plus players can expand the experience further by purchasing Season Ticket and/or add-on downloadable content (DLC). Also available on Xbox 360 and coming later this year to Xbox One and PlayStation 4 consoles.