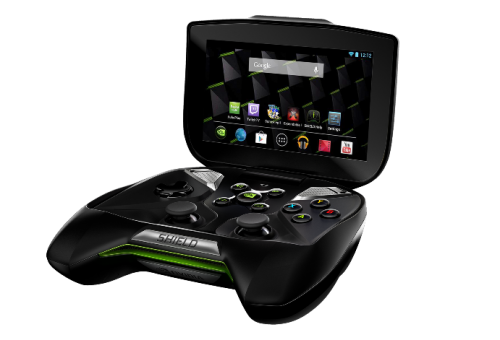 Way back at CES 2013 in January Nvidia announced the Shield, a high-performance gaming and entertainment portable system based around the powerful Tegra 4 processor system. Well, the system hits stores on August 1st, and is already seeing some positive early buzz.

Some of the features include:
• The ultimate gaming and entertainment portable – powered by Tegra 4
• Ready for Android gaming – compatible with 100+ games on Google Play
• Capable of streaming your PC games over Wi-Fi – to play anywhere in the house
• Featuring a console-grade game controller, 5-inch retina-quality multi-touch display, custom-tuned bass reflex audio
• Running pure Android Jelly Bean

There are already some games optimized for the Shield, including Riptide GP2, Chuck’s Challenge 3D, Blood Sword: Sword of Ruin, and Arma Tactics.

As you can see from the image at top, Shield is not just a game system but also includes a full Android interface. This will allow you to run all sorts of Android apps as well a variety of entertainment apps designed to take advantage of the Shield.

Another obvious thing about the Shield is that it looks like a console controller, so it’s not surprising that you can use it as one – if you have a 6-series Nvidia graphics card you can stream your games from your PC to the Shield in real-time for gaming on the go!

People who pre-ordered the system will be getting theirs on the delivery truck, and everyone else can grab theirs online at NVIDIA.com or Newegg.com, or at a mini-store in placed like GameStop or Microcenter. The cost is $299.

Are you excited for the launch of the Nvidia Shield?