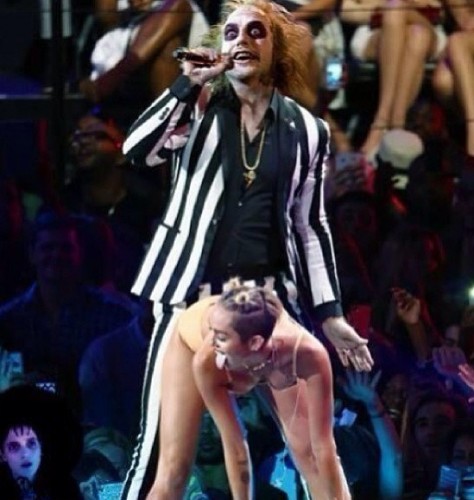 My family stayed up late watching the Video Music Awards (VMA) on MTV to unwind after a busy weekend; my wife and sons had people they wanted to see. What struck me was how in a world full of diverse music and musicians, there were only a dozen or so in a narrow brand of accessible pop music on display.

If you look at the list of winners below, and you noted who was in the very small ‘stars seating area’, you will notice tremendous overlap.

I have gotten very used to music awards in particular being very insular and self-congratulatory, to the point of industry execs expressing outrage at Justin Beiber and Eminem being ‘snubbed’ in 2011 in spite of bringing loads of money to the industry. And 2012 showed the impact – no one like Esperanza Spalding was going to win, and the industry changed the definition of ‘indie’ in order to be able to keep the awards within the ranks of the ‘big labels’ while calling many artists ‘indie’.

But the VMAs were an extreme example – for an award show that used to be edgy and would bring in artists from all over the popular music realm, it now felt like a shameless plug for products with artists and hosts alike constantly plugging for brands. From Windows Phone to Cover Girl to State Farm and more, there was a constant stream that dominated every aspect of the evening.

I thought it was cool how they had a pre-show that had performers and a variety of other little ‘moments’ going on, but soon I realized that they were padding for time – there simply weren’t that many celebrities anyone cared about in attendance. The red carpet gave us Taylor Swift, Selena Gomez, One Direction, Will Smith and his kids, Austin Mahone, 30 Seconds to Mars, and Becky G who seemed to be there pretty much exclusively for Cover Girl.

Most of the performances were acceptable, with Justin Timberlake having the most memorable; the bar was very low, but he did a decent job. As usual with these events, there was a mix of live singing and lip-sync. But the thing that had everyone cringing and asking ‘did I just see that?’ was Miley Cyrus.

For me it started on the Red Carpet, where she turned to the onlookers and said something and when they cheered she unironically said ‘see … they’ll do anything for me’. Unlike others she made no attempt to engage or acknowledge her fans.

But it got really bad in the performance that transitioned between her song and Robin Thicke’s ‘Blurred Lines’. Thick has become his own meme by wearing a ‘Beetlejuice suit’, but for Cyrus it was an embarrassing spectacle of twerking and grinding with her tongue hanging out.

Here is what MSNBC’s Mika Brzezinski had to say:

“I think that was really, really disturbing. That young lady, who is 20, is obviously deeply troubled, deeply disturbed, clearly has confidence issues, probably eating disorder and I don’t think anybody should have put her on stage. That was disgusting and embarrassing … That was not attractive. That was not fun. That was not funny. That was really, really bad for anybody who’s younger and impressionable and she’s really messed up … The whole thing was cringe worthy but I feel bad for her. She is a mess. Someone needs to take care of her. Someone needs not to put her on stage and make a complete fool of herself.”

And a classic reaction show from Will Smith and family: 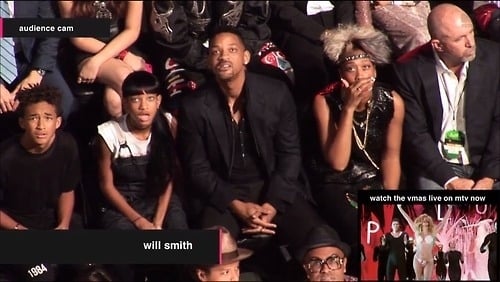 So I am once again left asking just WHY I stayed up to watch this, but aside from the usual reasons of overt commercialism and self-praise amongst a tight inner circle, I was dismayed at how small that circle has become, how hard the industry is working to push a certain set of artists and a certain ideal. And I was most dismayed at how in a world full of amazing music, we were up such a small, limited and safe version of what is available.