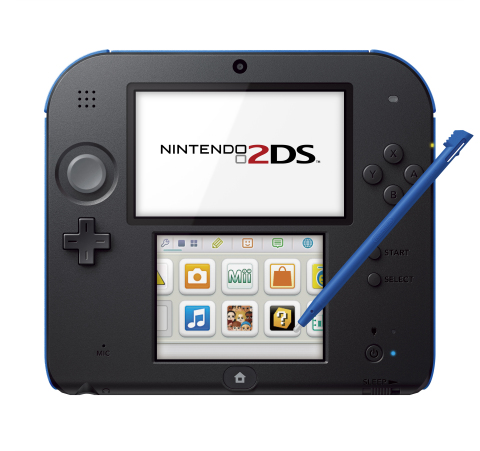 Big news from Nintendoland! On September 20 the Wii U Deluxe Set will be discounted to $299.99 and a limited edition Wii U bundle with The Legend of Zelda: The Wind Waker HD will arrive along with several high-profile game releases and special offers. Then, on October 12, the Nintendo 2DS handheld console will arrive. Let the games begin.

Yes, Nintendo clearly hopes to increase interest in their handheld Nintendo DS console and Wii U console with new offers, games, and special bundles. Let’s run them down!

On October 12, Nintendo will debut the slate-styled Nintendo 2DS handheld console for a MSRP of $129.99, which plays all Nintendo 3DS and Nintendo DS games (backwards compatible) in 2D. First available colors and accompanying carrying cases ($12.99 MSRP) will be red or blue. The Nintendo 2DS plays the entire library of packaged and downloadable games for Nintendo 3DS only in 2D. The 2DS still offer wireless connectivity features and the Nintendo eShop.

This bundle includes the black colored Deluxe Wii U console; a GamePad controller adorned with gold lettering, a gold Hyrule crest and gold symbols from the game; a download code for the digital version of Hyrule Historia, a book that details the chronology, history and artwork of The Legend of Zelda series; and a code that can be used to download The Legend of Zelda: The Wind Waker HD from the Nintendo eShop immediately at no additional cost.

The Legend of Zelda: The Wind Waker HD will be available separately as a packaged retail copy on October 4 with distinctive gold-foil packaging. GameStop will offer an exclusive Ganondorf figurine bundled with the packaged game for $54.99 MSRP.

What Nintendo purchases will you be considering soon?