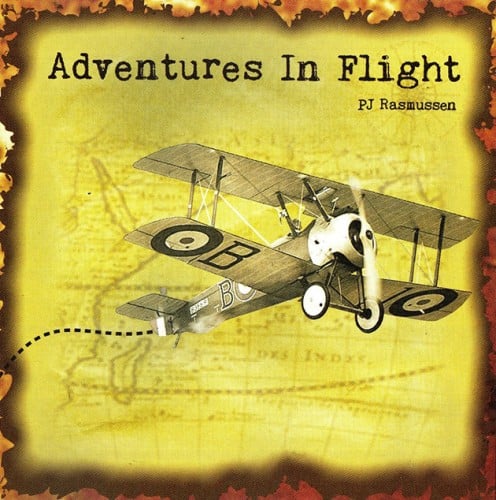 PJ Rasmussen makes it clear from the very first notes that he is an up-and-coming force on the electric guitar. His Kickstarter-funded album ‘Adventures in Flight’ sought to create music for TV and Film in the jazz genre, also accessible by general audiences. But while the music is solid and Rasmussen shines, the overall impact is uninspired.

A debut album is a daunting experience for any artist regardless of age. But guitarist/composer PJ Rasmussen’s first CD – Adventures in Flight on Third Freedom Music – shows a young man brimming with musical confidence and leadership qualities of a seasoned professional. A truly outstanding composer, PJ has assembled a remarkable sextet for a highly diverse, but totally cohesive set of Rasmussen originals.

For me, music is about the big picture but also about a series of moments; it is about the juxtaposition of Wagner’s ‘Overture to Rienzi’ and Miles ‘Bitches Brew’, and the shimmering shords in Mary Halvorson’s ‘Forgotten Men in Silver’. This is true to an extent for every CD I listen to more than once, and it is certainly true here, but not necessarily in the most positive way.

The big picture of ‘Adventures in Flight’ is an overall sense of ‘background music’. There are solid compositions, competently executed, that feel way too polite in their presentation. My wife was in the car with me waiting for our kids on my first listen, and she was reading and remarked that the music simply never made an impression. It was ‘nice’ enough and she would put it on as background music for a brunch without a problem, but didn’t think anyone would ever say ‘what is THAT music, I must buy it!’

On the smaller level, what constantly bothered me was the ‘studio musician’ feeling. There is PJ Rasmussen … and some other guys. Those ‘other guys’ are all very taleted and adept in a number of settings, but I was never thinking about this as a ‘band’. Many times as I listened I felt things might have been recorded using overdubs, with the only real intimate conversations taking place between bass and drums. Again there is nothing BAD, but nothing that ever got me excited about the music.

Well, perhaps there were some bad moments – I was reminded of why I am always doubtful of bands featuring both guitar and piano. It is a real challenge to make that work, and in this particular context I found that it often felt like having two centers on a basketball team with both trying to play center!

The particular ‘moment’ came during “Waxing and Wayne-Ing” just as Rasmussen really starts cooking with his solo. He has dropped from straight jazz to a more fusion-oriented distorted solo that was really building … and the pianist Chris Pattishall was still tossing mainstream jazz-style block chords at him as though nothing had changed. It totally killed the ‘mojo’ of the moment, and that was the moment I realized I would probably never listen to this recording again after the review.

‘Quick Hit’ Song: “Waxing and Wayne-Ing” – in spite of containing the ‘moment’ I mentioned above, it is also the purest example of why Rasmussen is worth watching and why in spite of being underwhelmed by this release I am keeping an eye on his future work. His melodic progressions and building themes over his harmonic structures are all very exciting to hear and make it all worthwhile.

Would I recommend?: Weak Recommendation … grab this to hear an excellent young guitarist in his debut, who shines in spite of an uninspired setting.

Suggested audience: Fans of mainstream jazz looking for something light that will serve as background music will be pleased with this recording.