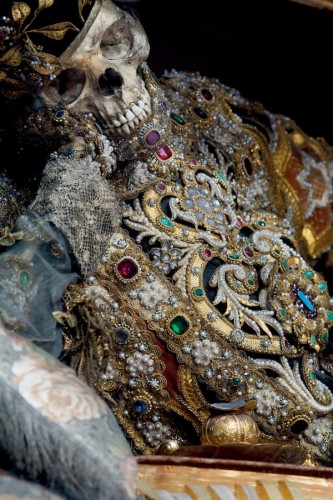 What do you do when you’ve got a catacomb full of purported martyrs’ skeletons, and you want to remind the faithful of the heavenly treasures awaiting them? You bedazzle those bones with jewels, and then display the results in shrines! And when skeptics question the skeletons’ provenance and the gaudy display, you hide them away until someone comes along and writes a book … 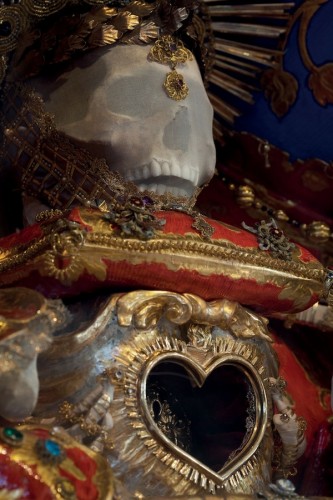 This all goes back to 1578, when thousands of skeletons were found in the Roman catacombs; the remains were assumed to be early Christian martyrs, and so they were packed up and sent to “many Catholic churches and religious houses in German-speaking Europe to replace holy relics that had been destroyed during the Protestant Reformation.”

The skeletons were put back together by skilled artisans, and then they were “encrusted with gold and jewels and richly dressed in fantastic costumes.” On display for nearly three hundred years, “these ‘Heavenly Bodies’ were venerated as miracle-workers and protectors of their communities.”

The book includes pictures of more than 70 jeweled skeletons, and it has the stories behind those and dozens more. Heavenly Bodies definitely seems like it would be an interesting read.

Get the book Heavenly Bodies: Cult Treasures & Spectacular Saints from the Catacombs, by Paul Koudounaris