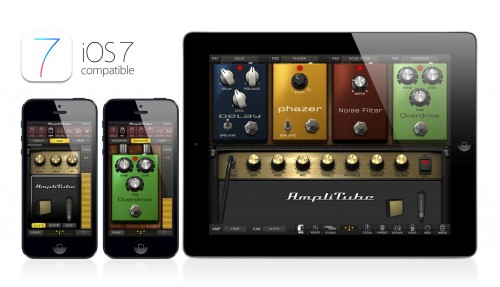 Here are some specifics about the iOS 7 support from the press release:

Inter-App audio allows audio apps to communicate with each other and stream the audio output from one app to another. This feature is extremely handy for adding effects, and processing the audio stream from one app and sending it to another. AmpliTube can be used as a “filter” app in iOS 7 for processing the audio from other apps, allowing musicians to use all of the stompbox and amplifier effects with any live (real-time) or recorded material. This feature is similar to AudioBus functionality, but provides the opportunity for more complex routing. AmpliTube is fully AudioBus compatible as well, making it the most flexible audio-processing and recording app for iPhone, iPad and iPod touch.

You can get more information at IK Multimedia and check out AmpliTube on the iTunes App Store for iPhone or iPad!