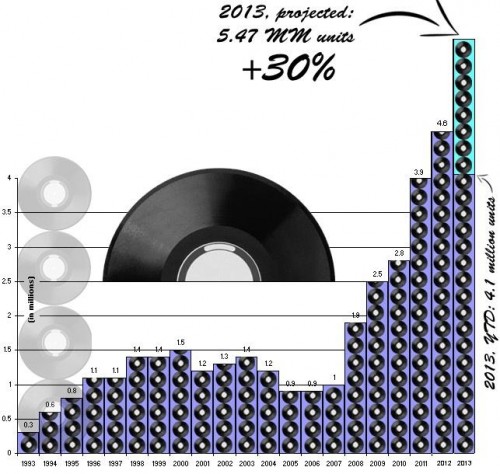 While I have always been an advocate of ‘owning’ music (as opposed to stealing or streaming), I have stuck with the latest tech trends: through the years I have had 45’s, 8-tracks, LPs, cassettes, CDs and MP3s. Each has strengths and weaknesses, but I am still bemused about the recent vinyl resurgence – which continues with estimates of 30% 2013 increase!

Of course it is important to remember that the top-selling vinyl album of 2012 was Blunderbuss by Jack White – and that sold 34,000 copies (yes, 34 THOUSAND) … and the second top-selling album was Abbey Road by The Beatles. Vinyl still accounts for only 1.4% of total music sales – but as all other physical music unit sales decline, vinyl continues to increase.

Better still – 67% of vinyl record sales come from independent record stores. That is certainly a great trend. Here are the top-selling vinyl records through the first three quarters of 2013: