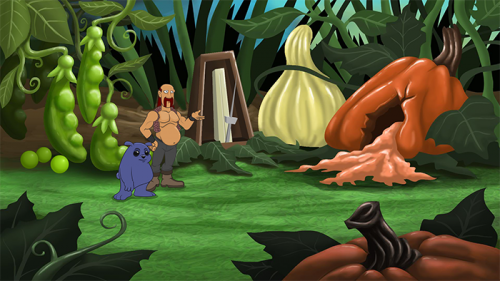 The Ballads of Reemus was a fun adventure game that evoked the classic LucasArts era of gaming. It was fun and funny with plenty to do and discover. Now Reemus is back for another adventure – well, he will be if you back him on Kickstarter! Develop Zeebarf plans to use funding to bring the game out in June 2014.

Here is a snip of what the game is all about:

A 2D, hand drawn, comedy-fantasy point and click adventure game in the vein of such classics as “Day of the Tentacle” & “Monkey Island” for PC/Mac/Linux. With future ports to iOS, Android and Blackberry planned.

The story revolves around Reemus, a medieval exterminator and his loyal sidekick Liam the purple bear as they battle giant insects in a quest to legitimize “extermination” as a heroic career path.

Of course, there is no better way to check out a sequel than by trying the original game. You can try the free-to-play ‘Journeys of Reemus’, and the original Ballads of Reemus is part of the current ‘Golden Jubilee’ IndieRoyale bundle!

Check out the project on Kickstarter and back it if you are intrigued!