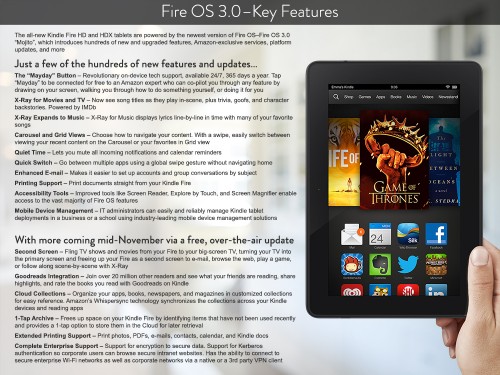 Along with the new Kindle Fire HD and HDX models, Amazon introduced a few other interesting items. These include a new Kindle Fire OS, Offline Streaming of Amazon Prime videos, and an always-ready video help system called ‘Mayday’. With these value-added features Amazon hopes to distinguish itself and move beyond just being an Apple alternative by taking a leadership role.

Amazon announced ‘Mojito’, Kindle Fire OS 3.0. The new OS brings native Android App compatibility, HTML5 app support, in-app purchase support and more. One of the biggest features is the new ‘Mayday Button’, which I’ll explore later. The Android app compatibility changes makes it simple for developers who simply want to release for the Kindle Fire, as well as those wanting to add services such as Whispersync for Games, GameCircle, In-App Purchasing, and more.

When the OS is launched in October, you will get enhanced email support, the ability to print directly from the tablet, X-Ray support for Movies, TV and Music. New Carousel and Grid views are available to customize how you view content, and you can enable ‘Quiet Time’ (like Apple’s Do Not Disturb) to block otu notifications. Integrated OfficeSuite will allow you to stay productive wherever you go.

In November Amazon is adding ‘Second Screen’, which lets you ‘fling’ shows and movies to your smart TV from the tablet, and it lets you utilize X-Ray to grab info on your tablet as you watch on the TV. They are also adding Goodreads integration, ‘Cloud COllections’, the ability to more easily archive items to free up space, as well as extended printing and enterprise support.

The Kindle Fire HDX also introduces the new ‘Mayday’ button. Amazon says “with a single tap, an Amazon expert will appear on your Fire HDX and can co-pilot you through any feature by drawing on your screen, walking you through how to do something yourself, or doing it for you—whatever works best. Mayday is available 24×7, 365 days a year, and it’s free.”

It will be very interesting to see how this works. To me it seems like a ‘Genius on the go’ – Apple has had great success with the genius program, but it requires you to go to an Apple store. And if you are like me, you are a couple of hours away from a few of them so you have to depend on phone support … which is not as good.

Of course, you will need to be connected to WiFi or 4G for it to work. They feature Mayday in their upcoming TV commercials which you can preview here.

Finally, Amazon is challenging Netflix and others with Offline Streaming. Amazon has not been tremendously successful at taking market share from Netflix, and with the recent announcement of offline YouTube (which Vevo is not supporting), Amazon has introduced Offline Streaming for Prime members.

If you are a Prime member, you already know about the ability to watch loads of movies and TV shows for free. Now with the Kindle Fire HDX tablets you can go a step further – you can download select movies and TV shows to the tablet so you can watch in the car, airplane, or just while waiting in a doctor’s office or sitting in a car waiting for your kids to be done with band practice!

In terms of details, you can download content to their tablet for up to 30 days, which you can watch without an internet connection. Once you start watching a title, you have 48 hours to finish before it expires. Not sure if there are re-watch limits or any other fine print.

So what do you think of Amazon’s new introductions?