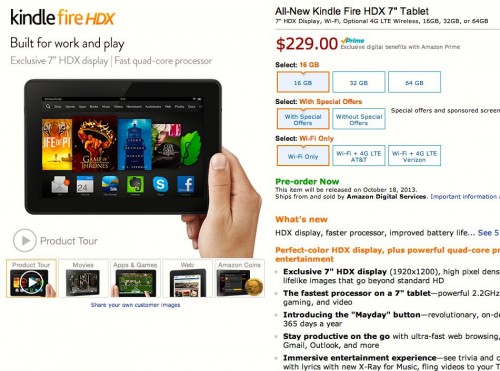 Overnight, we got word from Amazon that they were releasing a new line-up of Kindle Fire models. The current 7″ HD becomes the low-end, and they fill out the high-end with new quad-core based 7″ and 8.9″ HDX models. This is huge news in terms of features and pricing, but also a clear distinction between Amazon and Apple.

The two Kindle Fire HDX models are packed with loads of updates including new productivity apps for email and calendar, new X-Ray for Music, and ‘Second Screen’ which let’s you send contents to a smart TV or Playstation 3/4. You will also be able to do off-line streaming of (some) Amazon Prime videos.

Let’s look at the new models:

The base Kindle Fire HD 7″ tablet starts at $139 for the 8GB model (16GB is $169). For that price you get quite a bit – there is a new case that is slightly smaller and 2.5oz lighter than last year’s Fire HD, you get a new processor and graphics core that Amazon claims is 60% faster, and you get improved battery life of up to 10 hours of ‘mixed use’. You also get the latest ‘Mojito’ Kindle Fire OS with all new features. The 1280 x 800 HD screen remains the same, but the HD loses the front-facing camera.

You can pre-order the Kindle Fire HD here, and it is scheduled to ship October 2nd.

The Kindle Fire HDX 7″ replaces the HD as the ‘mainstream’ Fire. While size-wise it is smaller than the HD, technically it is worlds ahead. The new HDX is 1.5oz lighter than the HD (and 4oz lighter than last year’s HD), and they also shaved off 1.5mm of thickness. Yet there is a better front-facing camera, improved button placement and access, thinner bezel, and a better overall feel.

Inside the case is where things really shine. The screen is a 1900 x 1200 (323 ppi) super-HD screen with 100% accurate color. The system uses a 2.2GHz quad-core processor they claim is the fastest ever in a 7″ tablet. A new WiFi antenna speeds up downloads. Battery life claim is 11 hours ‘mixed use’ and up to 17 hours of reading.

You can pre-order the 7″ Kindle Fire HDX here, and it is scheduled to ship October 18th. LTE versions ship November 14th.

You can pre-order the 8.9″ Kindle Fire HDX here, and it is scheduled to ship November 7th. LTE versions ship December 10th.

The Difference Between Amazon and Apple

As I read about all of the new features in these new models and the pricing structure, I couldn’t help but think back two weeks to Apple’s iPhone 5c/5s event – and the anticipated iPad event most expect will happen in October.

First, I would argue that Amazon announced more stuff last night than Apple did, but without needing a 1.5 hour press conference full of hype and fanfare. Also, while the new HDX units are pretty much what the leaks said they would be … no one really cares. The thought was ‘if they actually manage all that stuff into the new Fires at that price point … it will be amazing’. Well, they did … and it is.

But the biggest thing that gets me is the price. Not the base price – the $329 iPad Mini compared to $229 Fire HDX is not a huge difference, as both offer loads of features and I consider each a great value for the price. And we know Apple demands margin with their tablets whereas Amazon doesn’t.

But the ‘Apple Tax’ really adds up when you go from the base to the top end model. For comparison, Apple charges $659 for the 64GB LTE iPad Mini – $100 for each memory bump and $130 for the LTE antenna.

By contrast, the 64GB LTE Kindle Fire HDX costs $409. That is right – what started as a $100 difference ends up at $250! Amazon charges $40 for each memory bump and $100 for the LTE. At that point the difference is insulting to customers, and the breakdown of unit sales shows that customers are noticing and Apple leaves money on the table with the exorbitant upsell fee.

But the HDX makes one thing clear – the iPad Mini 2 Apple releases next month NEEDS to be ‘Retina’. It doesn’t matter what form that takes – it could be the 2048 x 1536 of the current 9.7″ iPad, or something else entirely. I have been a strong supporter of the iPad Mini as being the ‘small tablet done right’ … but it was 1.5 year old tech LAST year! Now the new Kindle Fire HDX is nearly as thin and light and offers much more ‘bang for the buck’.

What are your thoughts? Are you grabbing one of these beasts … and if so, which one?