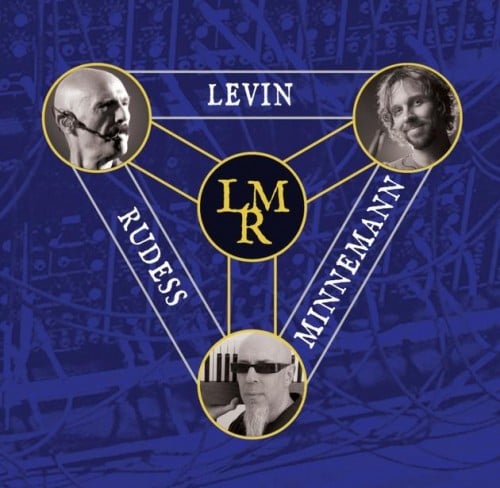 When you bring together masters like King Crimson bassist/stick-master Tony Levin, Dream Theater keyboardist Jordan Rudess and maniac drummer Marco Minneman, you know the results will be a shred-fest. But will it be any good? Rest assured, not only is this CD a humbling listen for musicians, it is a high-quality and rewarding journey through modern-day instrumental rock.

Where to buy: Amazon.com

From the opening notes of ‘Marcopolis’ to the last strains of ‘Service Engine’, Levin-Minnemann-Rudess is a powerhouse onslaught of uncompromising instrumental joy. Throughout the album there are tastes of prog rock from the 70s, 80s, and 90s as well as fusion, metal and pretty much every other hard-driving genre! For me the surprise was just how well it all worked as a cohesive whole given the disparity of parts and influences and backgrounds.

‘Marcopolis’ immediately reminds me of Jeff Beck – ‘Who Else’ era for the driving opening, then ‘There and Back’ for the melody, and ‘Wired’ for Rudess’ solo in the middle. But here is the thing – it isn’t derivative for a second. These musicians are able to collectively say ‘we love this stuff’ and give it some twists and turns and make it their own. The end result is a song that is modern and exciting and loads of fun.

While ‘Twitch’ is a trip down prog-rock lane, ‘Frumious Banderfunk’ is much more in line with the heavy metal work of Rudess’ Dream Theater. ‘The Blizzard’ is a touching melodic work which carries a melancholy theme while allowing Rudess to stretch out on piano. And ‘Mew’ is another genre-skipping trip through generations of prog-rock and fusion, sounding vaguely like many songs you have heard but not any one in particular.

‘Afa Vulu’ starts out with a doubled ‘big sound’ drum beat and subsonic synth. The pattern sounds like something from mid-80s Genesis or Phil Collins solo work, but lands firmly in a techno-fusion groove that reminds me of 80s era Bill Laswell – and is as fun as Laswell’s ‘Baselines’ stuff … right down to the dripping-with-resonance trailing synth notes!

One of the cool things about the album is that it feels like a collaboration throughout – ‘Descent’ is very bass-heavy, but Minneman is all over the beat and Rudess provides essential lightness to the heavy proceedings. And you really need to check out the video below for ‘Scrod’. The closing song ‘Service Engine’ is long and winding and a really great closing journey for this epic record.

‘Quick Hit’ Song: “Twitch” – jumping right in with a stuttered syncopated bass & drum beat and joined by a moody and atmospheric synth and guitar harmonic line that drops into yet another rhythmic interlude. The ‘chorus’ with vocal chants feels like an action game or movie. Suddenly things are swirling around and very reminiscent of Emerson, Lake and Palmer.

Would I recommend?: Absolutely! As I said, the album covers loads of ground from rock to metal to fusion to prog. These musicians are all technically brilliant, but the album captures much more than that – it brings across creative synergy between artists of disparate backgrounds that somehow coalesce to produce a whole greater than the sum of parts.

Suggested audience: Do you love ‘musicians’ music’? Stuff that is technically insane and that you will listen to again and again to absorb the details of what they are playing and how they are putting it together? If so, this is an essential buy. There are too few instrumental rock recordings worth buying recently, and Tony Levin is at the center of my two favorites so far this decade.

Here is the group playing ‘Scrod’: