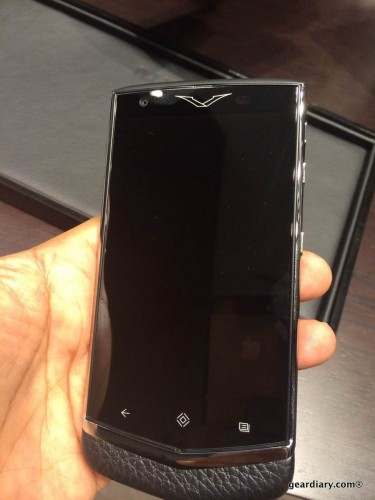 You’ve got to hand it to my friend and fellow gadget magpie, Drew Guttadore! He knows how curious I’ve been about the new ~$6,000 Android-based Vertu Constellation; because he’s also been curious about it, he recently went hands-on with one so that he could share his initial impressions … on everything but the actual Android/Vertu experience. Curious? Read on!

I’m currently working in Manila, PH and have the ‘luck’ of a Vertu store very close to me..  This is not good, I’ve already purchased one Vertu and the personable staff told me they would text me when the new Android version came in.  I said sure, hoping it would be a long time away.  It wasn’t,  I waited only a month. Urghh.

So I jumped in a taxi and headed down there to have a quick look, right.  I should preface this discussion with a bit about Vertu and my history with them. Vertu is a premier class of mobiles comprised of both feature phones and smartphones.  They have suffered of late, as they were a division of Nokia and persisted in releasing Symbian phones until recently when they were sold to a consortium and went Android.  Their first Android release, the Constellation Ti, wasn’t met with stellar reviews and is a bit of brick. I have purchased many Vertus over the years, and have always appreciated the fine quality and craftsmanship. Frankly, as a man, I can’t buy and wear jewellery — just a watch and mobile.  Watches would be a completely separate conversation!

So I was curious when the salesman told me that the new model had been totally redesigned and was actually a more moderately priced line..  Yeah okay, $7,000 isn’t exactly moderate, anywhere but Vertu.  I can buy a reasonable car for that, but I have watches that cost more, so it’s in line. Sort of.

I went into the store and the salesman quickly grabbed their demo model, yes they have a demo-only version which can’t be resold, and it felt so nice in my hand! I quickly came back to my senses, and decided to do an unboxing in the store (so to speak), and send it off to Judie.

The unit is a little heavy as to be expected, and it is the total antithesis of Samsung units. It has less features, but it has a supreme build. I couldn’t turn it on, as it was a demo, and I’d actually have to buy one to see the start-up screens and so forth, but who knows … it’s Sunday morning, and I’m a little bored.

If you have some questions let me know, and I will answer to what I can.  I really am thinking about buying it today … 🙂

I asked Drew today if he had succumbed to the temptation yet; so far he has managed not to. He and I both agree that Vertu makes some of the most amazing hardware that you can buy anywhere, but …

I reluctantly told him that I was proud of him for not buying it, because as an Android phone the Vertu Constellation is incredibly underpowered; if Vertu wants to produce a smartphone, then for what they are charging they should make the SMARTEST phone.

Drew says, “the problem Vertu has is that they have made the same phone for YEARS! There is no way, if they are entering the Android world, that they can continue to do that. Every year they are going to have to up the ante, and this is my big concern for them. It’s not the way they do business, and I’m wondering how long they will last.”

Back when they offered only dumb phones, Vertu took the position that their customers didn’t necessarily want all of the bells and whistles a smartphone could provide, but with their concierge service able to handle anything their customers needed, their stance made some sense. When Vertu entered the smartphone market, they negated their previous party line, because obviously their customers wanted apps and the ability to do the same things on their $6000 phone that they could do on their $600 iPhone or HTC One.

If you are the type of customer who would throw down the cash to buy a Vertu Android smartphone at full retail, wouldn’t it make sense that you would also be the type of customer who would want the latest and greatest Android OS features? That’s not the way Vertu has ever done business, though. It will be interesting to see how much longer their “smartphone” division lasts.