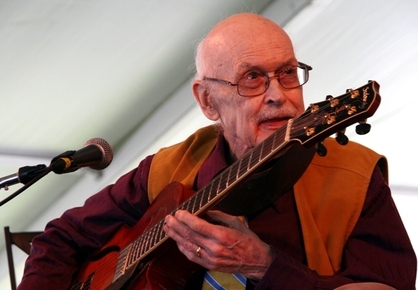 My favorite Sonny Rollins album is ‘The Quartets Featuring Jim Hall’, bought on LP in the early 1980s without hearing it – based on recommendations of friends and reputation of guitarist Jim Hall. It remains one of my favorite albums and is one I am listening to today as we mourn the loss of the jazz guitarist at age 83.

From the New York Times:

Jim Hall, a jazz guitarist who for more than 50 years was admired by critics, aficionados and especially his fellow musicians for his impeccable technique and the warmth and subtlety of his playing, died on Tuesday at his home in Greenwich Village. He was 83.

The cause was heart failure, his wife, Jane, said.

Pat Metheny called the ‘Father of Modern Jazz Guitar’, so the best way to memorialize him is to share some of his classic music, from playing with Sonny Rollins in the very early 1960s up through a master class in 2010.

Here is a live TV recording of the quartet playing the classic song ‘The Bridge’:

And a funny video of him ‘auditioning’ for Merv Griffin in 1965:

From the Eddie Lang Jazz Festival in 2010, playing ‘All the Things You Are’:

Jim Hall: A Life In Progress, a documentary from 1999: