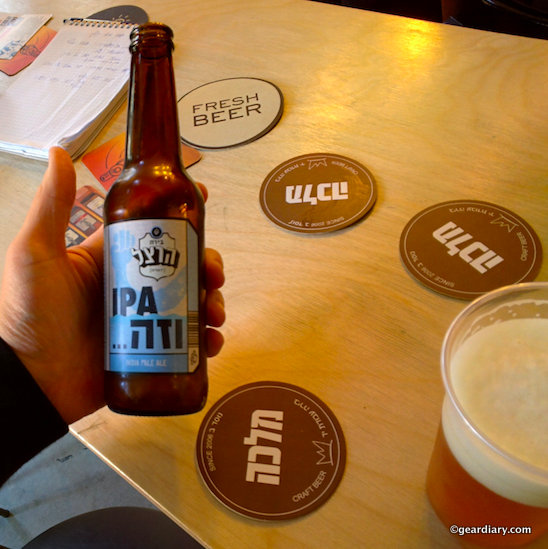 There was a time when the only Israeli beer you could get in Israel might best be described as a poor excuse for beer. (I’m looking at you Macabee and GoldStar!) Seven years ago all that began to change as Israelis developed a taste for quality microbrews. Among them is an IPA from the very first brewery in Jerusalem.

Just a few years ago, Judie and Kevin introduced me to IPAs (India Pale Ales). Until then I liked beer, but I wasn’t adventurous and certainly didn’t know a quality beer from something more pedestrian. They got me to taste some finely crafted IPAs, and I was sold. And now, given my choice, I’ll take a good IPA over pretty much any other beer. And when I find a new place to enjoy a cold one, I make sure to try any IPAs they might have available. So when we happened upon the Beer Market, a small shop in Jaffa that only carries beer from small Israeli microbreweries, I had to check it out. I asked for an IPA and was served one from the very first brewery in Jerusalem. My was it tasty. I asked to speak to the owner and this is part of what he shared with me.

Beer Market demonstrates the evolution (and maybe revolution) of the Israeli craft beer industry, offering more than 80 beers from some 25 micro breweries – located all over the country. A wide range of superior, fresh beers, some of which have special tastes and traits, can be found in this shop. You will always find a wealth of knowledge on beer, and the staff will be happy to assist you in choosing a variety of beers, which are sold in mixed 6-packs that you fill yourself. The Beer Market always offers beer on tap, the types of which change every day, which you can drink on the bar or by the fishing boats

Some of the Israeli Beers available there include Herzl IPA VeZe… , HaDag HaLavan 40° BaTzel Summer Ale, Laughing Buddha Perah HaBar / Honey Flower Wheat , HaDictator Bitter, and Dancing Camel Olde Papa Babylonian Olde Ale 49. All I know is that the days of lousy Israeli beer are over, and a growing number of brewers are stepping into the ring and making beer in the Holy Land that tastes absolutely divine. 🙂 Beer Market is located at Jaffa Port Market, Retsif HaAliya HaShniya, Jaffa Port in Tel Aviv.