Toshiba is not the highest profile maker of consumer technology, but they consistently come up with great new products that meet a wide variety of needs. At CES 2014 Toshiba announces exciting TV and PC products including a HD Chromebook, 4K laptops, Haswell updates for Kirabook, new 4K HD TV platforms, streaming and universal disc player bases, and more! 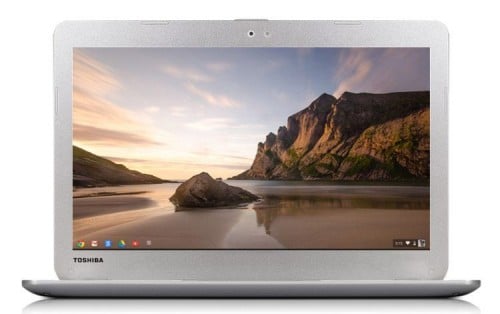 Here is an overview of the announcements:

With all of the cool things on offer, my eyes were immediately drawn to the Chromebook. Despite seeming to be a ‘next gen netbook’, in our house the Chromebook is used all the time, and that seems to be true for many consumers who made Chromebooks the fastest growing segment in 2013. Here are the details we know so far about the Toshiba HD Chromebook:

Toshiba Chromebook:
– The only Chromebook in the category to feature a 13.3-inch diagonal HD display, Toshiba’s Chromebook offers greater versatility for productivity-driven users.
– Powered by Intel’s ‘Haswell’ platform, this Chromebook delivers robust performance, fast start up and up to nine hours of battery life.
– Affordable for everyone at just $279.99 MSRP.

In addition, they note that their Chromebook will be available in February, weigh just 3.3lbs, and offer 2GB of RAM with a 16GB solid stage local storage drive. The Chromebook will also feature two USB 3.0 ports, a full-size HDMI® port, security lock slot and a memory card reader, plus Bluetooth® 4.0 and dual-band 802.11 a/b/g/n Wi-Fi.

My only concern is the 2GB of RAM and how that will impact performance across multiple tabs or with multiple add-ins loaded. Otherwise this looks like an incredible value!