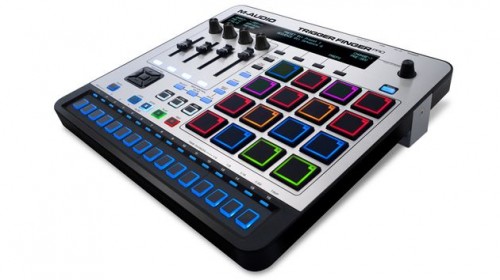 Here is what M-Audio is saying:

Trigger Finger Pro is a fully encompassed performance instrument and software control station in the form of a portable, 16-pad (4×4 configured) instrument with onboard sequencing. Nearly a decade ago, M-Audio revolutionized the industry by introducing the first performance pad controller and effectively set the stage for the MIDI controller market with the Trigger Finger. The Trigger Finger Pro draws from its predecessor’s performance pad roots but features an entirely new hardware design, user experience, and creative functionality to serve both the live performer as well as the music producer. It’s modern design features 16 ultra-responsive RGB illuminated pads, 16 backlit step sequencer key controls, a road-ready chassis with brushed aluminum faceplate, and a high-resolution screen.

The new edition looks fantastic and will have loads to offer for new and experienced music producers alike! My son was terribly excited when he heard the announcement!

Trigger Finger Pro will be available Spring 2014 at a price of $399. Head to M-Audio for more info!

Here is a video overview from the NAMM floor: