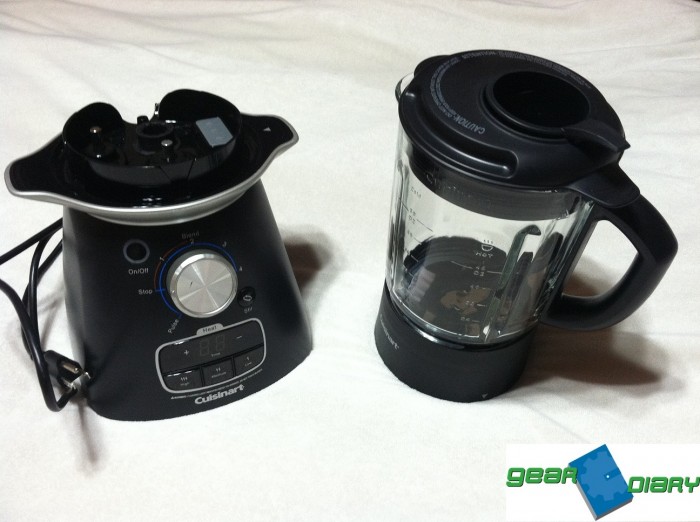 The Blend and Cook Soupmaker by Cuisinart lets kitchen culinarians make hot soup on a chilly day, then totally switch to frozen mixed drinks in the summertime with this flexible right in the glass blender jar. The black finish design looks great and helps with stains, while other advantages include BPA-free materials and the familiar spill lip on the base.

Initially a Williams-Sonoma exclusive release, the Blend and Cook Soupmaker by Cuisinart weighs a total of 13.8 pounds. You also get a nice heavy-duty cleaning brush and instruction guide with a recipe book for soups and other recipes.

The hottest blender to hit the market, the Cuisinart Blend and Cook Soup Maker, is causing quite the stir! This unique blender has a worldwide patent on the cooking technology that actually allows you to cook on low, medium, and high which correspond to sauté, simmer and full boil. Then just use the stir function as if you were stirring a pot with a spoon to mix ingredients while cooking. This is the only blender that can cook a batch of soup, sauce and even desserts plus blend a smoothie, crush ice and make vinaigrette.

Soup is one of the most diverse and beloved dishes in a home cook’s repertoire, and has been a staple of kitchens around the world for centuries.  Traditionally, soups of all kinds are prepared in stages: chopping vegetables, slicing meats, prepping and measuring herbs and spices, and of course, actually cooking the soup.  Now, we can do all of this – even cooking – in the new Cuisinart Blend and Cook Soup Maker (model no. SBC-1000).  This innovative new blender utilizes patented technology that allows for cooking and stirring ingredients, which permits fresh homemade soup to be prepared from start to finish;: the nonstick heater plate can be used to sauté ingredients, simmer and even boil soups, all of which can then be blended to the perfect consistency with the touch of a button.  In addition, the blender is ideally suited for more traditional tasks like crushing ice and blending smoothies and cocktails.

The black finish design looks great and helps with stains and wear, while other advantages include a BPA-free materials and familiar spill lip on the base.

The thermal shock-resistant glass blending/cooking jar is fairly heavy, and it features a temperature-safe handle plus a conveniently removable measuring cup within the press-on lid. This bora silica (borosilicate) jar can process 48 ounces of hot liquids and 56 ounces of cold liquids. 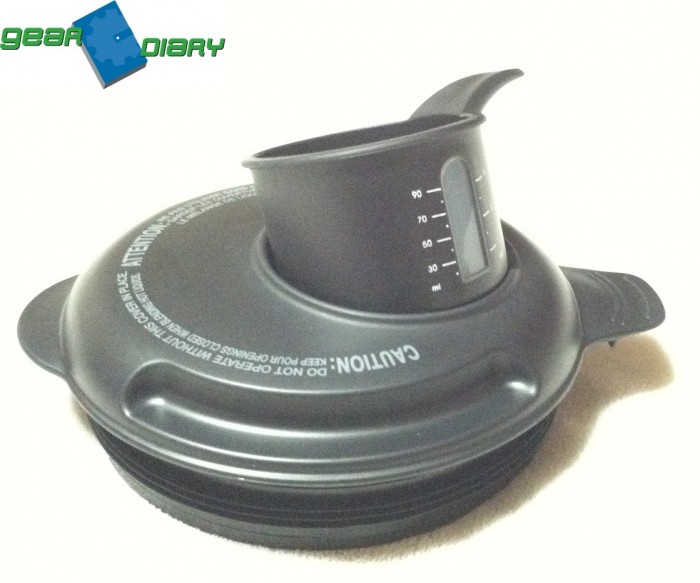 The cup and lid are relatively easy to remove, while the lid is thick enough to protect bare hands from high temperatures when handling the jar. You can easily serve from the jar, which saves dishes. The jar assembly cannot and should be used for storage.

The jar is fairly heavy especially at the bottom collar (heavy plastic base) that includes the non-stick heating plate and blade assembly. You would remove the gasket from the collar and then unscrew the blade assembly from the jar for cleaning, especially when getting food stuff between the glass and black plastic. 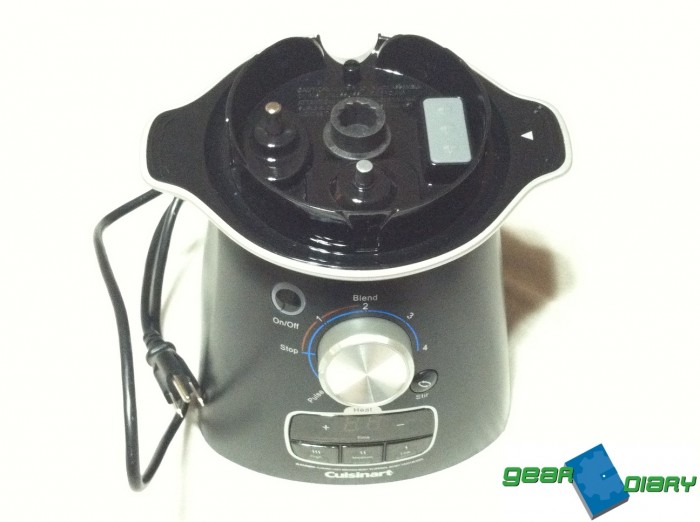 The heavy-duty motor base includes basic controls including a blending control knob and temperature control panel. 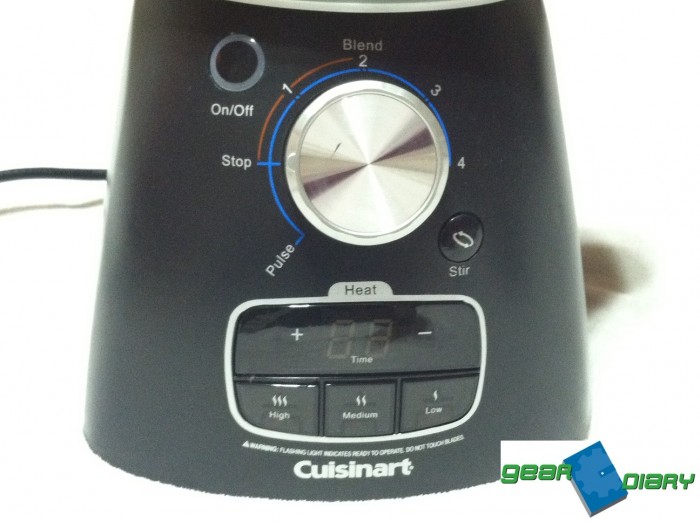 The blending controls includes a manual pulse (dial all left) and four speed settings (one through three recommended for hot/warm) plus a stir as separate button so you can blend during cooking; these functions work well and are relatively quiet. 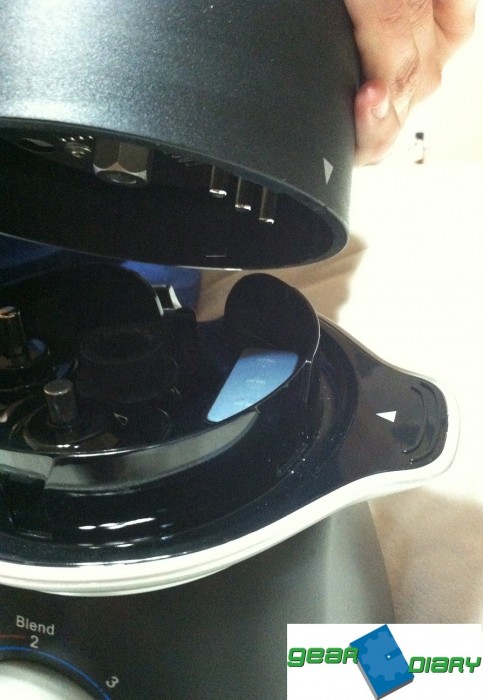 When assembling the jar to the base, you just match the white arrows on each together. 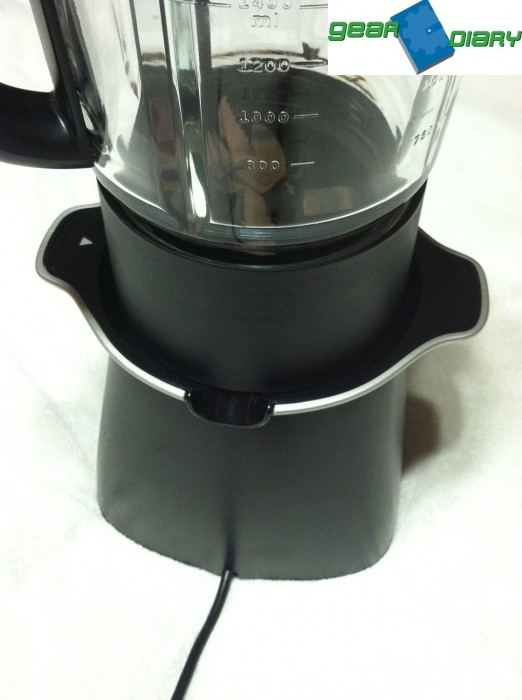 The spill lip on the base runs any food/liquid that might get spilled to the back by the cord, which prompts some strategic placement, especially for messy cooks. 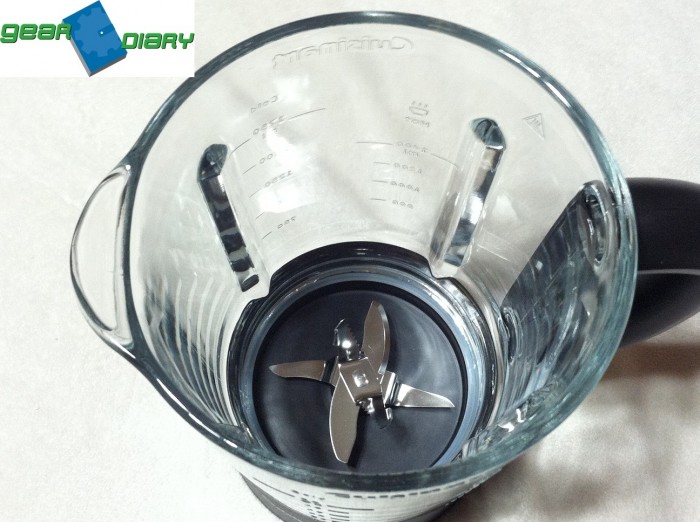 The 900 watts of heating power is considerable while the two serrated, stainless steel blades in the jar base also demand some safety precautions and special attention. The blades allow for chopping and mincing and worked well in soup making when placing small food pieces in the assembled jar and letting them heat for a while to soften them up. If bigger chunks are desired, then just use pre-cut frozen food pieces and only use for heating. 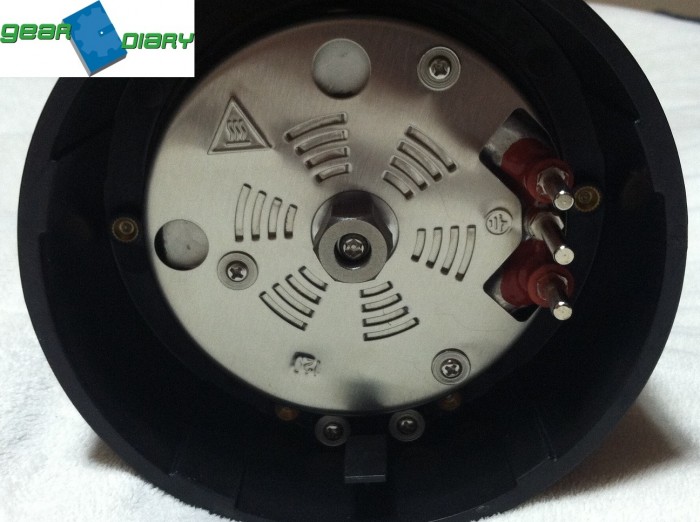 The heating action work faster than a crock pot to make soups quicker and with less mess thanks to the non-stick heating plate. Spills were non-existent from the base as caution was a particular stress when separating the jar from the base due to the heating element, which is well-protected by the collar on the outside. Avoid looking at the bottom to match up the connection and just use the arrows, which minimizes the open space and potential for accidents in between them. The jar is relatively heavy, so it’s a good arm workout if frequently used.

A full jar of soup or other hot concoctions makes enough for a family of six. Cooks can also create a better textured soup with the mixing capabilities, but it’s still flexible enough for those who just want to add ingredients without mixing or purees. You can easily keep the soup warm before serving (straight from the jar to save dishes). 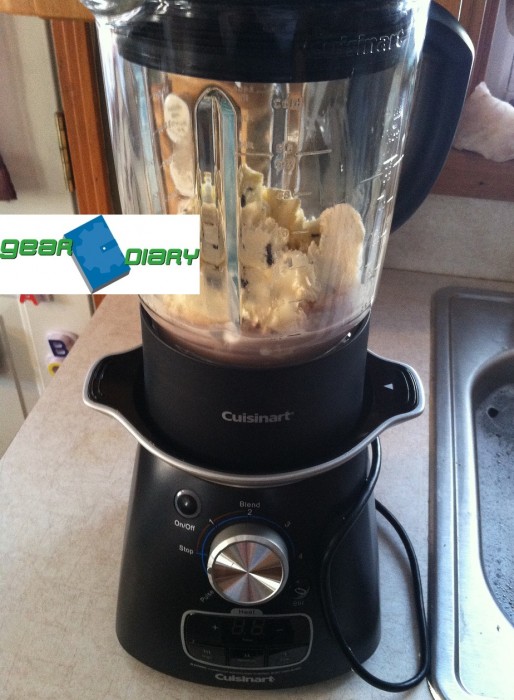 The cold actions let you blend enough ice-cold smoothies for seven from one jar’s worth. The blades are strong enough to crush ice in a few seconds, which is ideal for cocktails, shakes, smoothies, and my favorite..mudslides (using soft ice cream and cinnamon).

The Blend and Cook Soupmaker is also great for jams, sauces, gravy, heated pudding (then refrigerate), and baby food, but it’s not designed or recommended for use as a juicer.

After cooking, sauteing, blending and anything else, it’s time to clean. The smell is noticeable, especially after prolonged heating times. The gasket (located in the collar) can stain, but it’s a minimal issue since it’s an unseen piece.

Clean up basically involves adding water to the easy-clean assembled jar (leave on collar with blade assembly and gasket), then adding a drop of dishwashing liquid and finally a nice cleansing blend. You can easily disassemble the jar by removing the collar (with gasket) and washing regularly and carefully using the included brush. The collar with blade assembly contains electrical components on the bottom, which requires special care/protection when cleaning.

The Blend and Cook Soupmaker by Cuisinart is a great multifunctional appliance that offers tasks that are unique enough to replace other kitchen appliances (e.g. emersion blender). It’s much more than a “blender that heats”, and it is a perfect on-the-go option for busy people.

The Blend and Cook Soupmaker by Cuisinart comes with a limited three-year warranty.