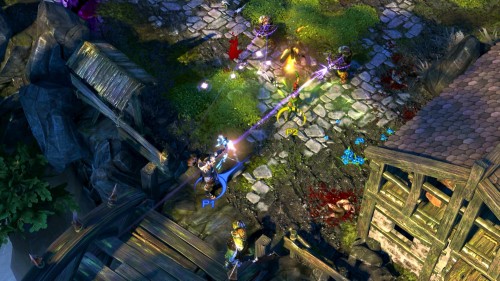 Action-RPG Sacred crashed onto the scene in 2004 – literally! It was unstable and buggy, but promising enough and with great support, and it hooked an audience. Sacred 2 continued to advance the genre, but since Deep Silver took over the Sacred license in 2009 little has been heard. Now we have release info – Sacred 3 arrives this summer!

Deep Silver has released an announcement trailer and some screenshots for the game, which is coming for PC and consoles (PlayStation 3 and Xbox 360) this summer. They have also stated that the game is “built around the central concept of co-op gameplay”.

Here is some of the press release:

Deep Silver today announced that the next installment of the famed Sacred franchise, Sacred 3, will release on consoles and PC this summer. Sacred 3 takes players back into the fantasy realms of Ancaria, where they will need to band together in the hope of vanquishing the deadly tides of evil. Sacred 3 will be released for the PlayStation®3 computer entertainment system and for the Xbox 360 games and entertainment system from Microsoft as well as Windows PC.

“The paramount development goal for Sacred 3 has been to create a seamless online and offline co-op experience”, said Remy van Leeuwen, Brand Manager of Deep Silver. “By creating a game built around the central concept of co-op gameplay, we’re expanding the series to new audiences without compromising the rich lore and fantasy of the Sacred universe.”

You can get more info on Sacred 3 from: