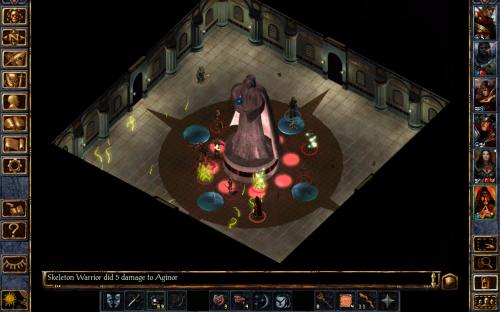 Way back in late 2012, Baldur’s Gate Enhanced Edition arrived for the Mac & PC, with the iPad version landing a few weeks later. Now, nearly  8 months later, the classic RPG that launched the modern era of gaming in 1998 arrives for a wide variety of Android devices on the Google Play store for $9.99!

Baldur’s Gate remains one of the classic experiences in the role-playing genre, a ‘must play’ game superceded only by its sequel. Here is some of the description:

Baldur’s Gate: Enhanced Edition contains the original 60-hour epic, as well as the following expansions:
* Tales of the Sword Coast: Explore the fabled Durlag’s Tower and more locations from the original Baldur’s Gate expansion.
* The Black Pits: You have been captured and forced to fight in Baeloth’s marvelous arena. A myriad of monsters await, as well as countless other adventurers who face the same fate. Maim, murder, and maul your way to freedom… if you can!
* Discover countless improvements we’ve made to the original game, including high-resolution fonts, an improved interface, dynamic zooming, and more!
Baldur’s Gate: Enhanced Edition also offers the following premium content available for purchase:
* Brothers Lost: Lend your aid to Rasaad yn Bashir, the Sun Soul monk, as he scours the Cloud Peaks in search of his lost brother.
* Neera and the Red Wizards: Save the wild mage Neera from the cruel machinations of Thay’s dreaded Red Wizards.
* Path of the Bloodied: Join the blackguard Dorn Il-Khan in taking revenge against those who betrayed him in Luskan.
* Gallery of Heroes: Reimagine your character with eleven never-before-seen character portraits from acclaimed Icewind Dale artist Jason Manley!
* New professionally recorded voice sets to choose from to further customize your character.

From reviews I have read, this is definitely the ‘roughest’ version, with various devices having lousy performance, glitches and crashes. This is in stark contrast with the iOS and computer versions which are polished and definitely worth playing. Of course, if you are a fan and looking to play, it is better than all of the ‘hacks’ to load the original copies of the game onto mobile devices (not to mention it is legal).

Here is the Baldur’s Gate trailer: