Snake is back in a single-player storyline set in 1975 that follows directly after Peace Walker (1974) , followed in early 2015 by Phantom Pain. Published by Konami and developed by Konami Productions, Metal Gear Solid V: Ground Zeroes, presents stealth, cinematics, and compelling plots in a prologue package leading to the second piece of this fifth installment Phantom Pain.

Set in 1975 (right before Peace Walker), Metal Gear Solid V: Ground Zeroes (GZ) places Snake (a.k.a. Big Boss), voiced by Kiefer Sutherland, in a Cuban camp called Omega for a rescue mission. Yes, one base mission, but this single offering does not diminish the gameplay or the replay value, so the purchase is definitely a worthwhile experience as well as a great way to get a jump on the upcoming Phantom Pain. Ground Zeroes and Phantom Pain were originally planned as a simultaneous release, so GZ is very forward thinking.

Set in 1975, the GROUND ZEROES story centers on Big Boss, legendary hero and mercenary, as he infiltrates a sprawling secret Cuban prison camp called “Camp Omega” on a rescue mission with a need to remain undetected. Quickly, he finds himself alone behind enemy lines with the freedom to choose what route to take; he can attempt pure stealth, open action, or something in between – how the mission is carried out is entirely up to each individual player. The game also features additional side missions that extend gameplay beyond the main prologue mission.

GROUND ZEROES features groundbreaking new technology and features made possible by Kojima Productions’ FOX Engine. These include the use of day, night and weather conditions that dramatically alter gameplay decisions. The game also utilizes a new, non-linear gameplay style for players to come up with numerous approaches and challenges, offering higher replay value. Furthermore, the game features an online global ranking system where players can compete in unique in-game/mission challenges and achievements and see how they stack up against others. Finally, players will find second screen functionality via the iDROID app. The app offers players a way to access maps, summon air support or play cassette tapes found throughout Camp Omega without blocking the view of nearby soldiers or areas. The iDROID app is available on iOS, Android and Xbox SmartGlass systems as a free download.

As always, the stakes are high as Snake’s group contends with political unrest and unexpected events.This game rewards forward thinking players and inundates new players with compelling scenarios. I never got so involved in a Metal Gear game as much as this gem. I had to stand up for most of the gameplay. GZ  leaves players craving more (a good thing) while satisfying stealth/action fans. 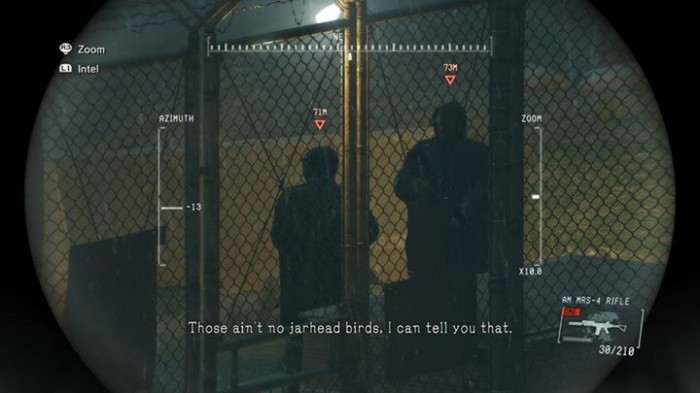 The non-linear gameplay progression is a first in the series while the amazing cutscenes trigger at key moments when players achieve specific objectives and complete actions. Players never get to face the enemy commanding officer (CO) directly and there are no “boss” fights though regular foes are very challenging. 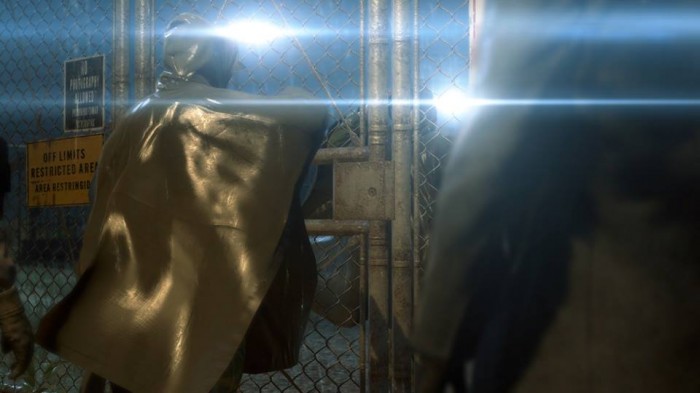 The visual textures, camera movements, and direction are all top-notch, which creates an intense experience while the open-ended methods players can use to complete objectives draws a personal, emotional connection that can also be fun.

Equipment does wears out, which can really catch players off guard at first. The logic behind these mechanics prevent players from taking an “easy route” to dispatching baddies.

In this game, developers miss the opportunity to uniquely expand presented elements like mentioning how Snake has to cautiously monitor his exposure to the weather or he might get hypothermia. This mention doesn’t translate into a visceral challenge for players as enemy fire remains the highest and only danger. Players regenerate as Snake after his allies decry his demise, but constant restarts, deaths, accidents, and other errors hurt the ending performance score.

More obvious elements include equipment that can adversely affect a safe helicopter pick-up. Other presented elements include explanations where developers basically prevent a cheat. The most prominent example involves weapons with silencers on them. Developers incorporate items, collectibles, and unlockables into several situations requiring strategy, consideration and purpose, so collect as many as possible.

The controls require a learning curve, but it’s definitely worth the time. Customization options would have been great here, but the overall scheme should work well for most players. Hit the L1 button any time to hear audio instructions and guiding hints over the radio. 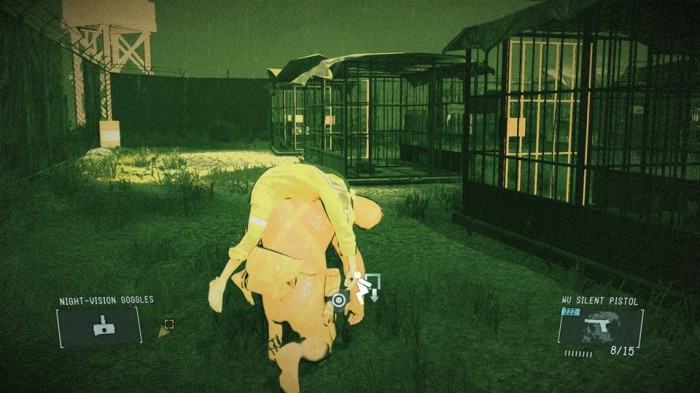 Gear helps Snake complete his ops, especially two special items – the binoculars that let players “tag” their enemies and the iDroid, which has enough function and information to help players dig deep into missions when used to its potential. The iDroid is easily accessed using the PlayStation 4 controller touchpad.

Grenades and C4 are plentiful benefits to take out equipment, but unfortunately, a knife is not part of the basic gear, so players must constant find creative ways to quell enemies then hide them. Sniper rifles and rocket launchers are very handy at the end but creative players can succeed without them. Sound and line of sight are the biggest considerations when strategizing gameplay.

Special actions include a nice slow motion “reflex mode” (can be disabled) that displays a visual arc in the direction of the enemy who spotted you and that familiar exclamation point and sound. In this special action mode, players get a chance to get the jump on an enemy before they spill the beans to their superiors or comrades. Other stealth elements also include self discovery actions like hiding on vehicles.

The motions angles include the standard upright, crouching, and crawling positions. Shooting low to high is a key disadvantage because accuracy is drastically diminished when shooting through any object, which obstructs the shot. For example, bushes would not make any difference in a realistic shot, but here they throw off your targeting. 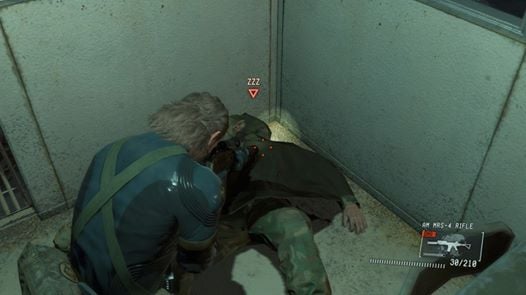 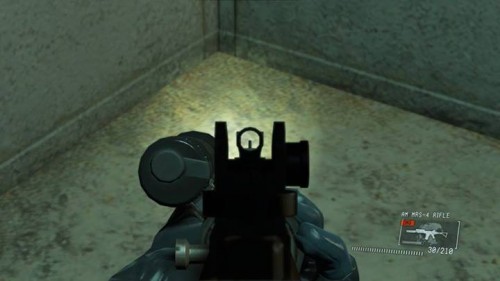 Some other glitches include disappearing baddies after carrying them around different areas to conceal them. Once the mission is completed, players can revel or lament their score before unlocking special and extra ops missions. 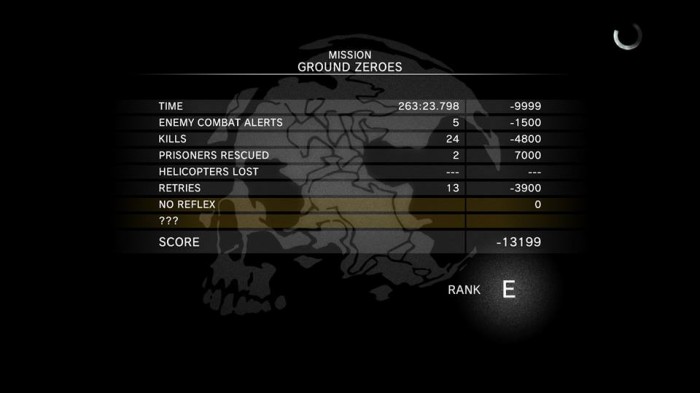 I unlocked 7 out of 23 possible bonus materials after my long, experimental session, which garnered an E rating, so there are several extra activities to boost the replay value just by completing the basic op.

The musical score from Ludvig Forssell and Harry Gregson-Williams (The Chronicles of Narnia: The Lion, the Witch and the Wardrobe) matches the epic visuals, which debut the Fox graphics engine. Players also get helpful sound cues (e.g. when ready to start mission) and several subtitle options including Russian and Japanese. 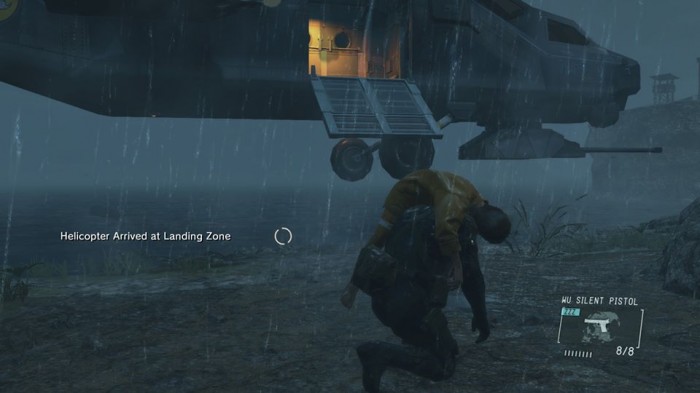 Metal Gear Solid V: Ground Zeroes hooked me in with stellar stealth, surprises and even shocks. If you let the game envelop your senses, then you get an immersive experience where you have to be standing up a yard away from your screen as you play. You cannot avoid feeling the physicality of the game. The tension of the stealth…getting caught…failing the mission…save hostages. The scenarios challenge players without overwhelming them.

Also available on PlayStation 3, Xbox 360, and XBox ONE. The METAL GEAR SOLID V: GROUND ZEROES iDroid app for iOS, can be downloaded for free from the Apple App Store or for Android devices via Google Play App Store.

Be sure to stay for the ending credits that set up the upcoming Phantom Pain, which will take place around 1984 in Afghanistan during the Soviet war; it is scheduled to release in early 2015.

What Needs Improvement: unexpected limitations, elements could have more impact in gameplay, shooting through objects, no boss fights, no knife, control customization options