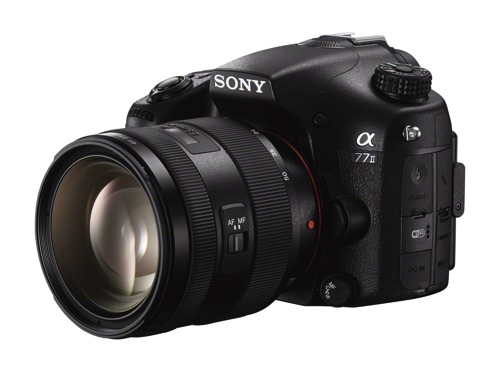 Sony’s got a new offering on the way and it comes with a mind-blowing, 79-Point autofocus system. The new Sony ?77 II Interchangeable Lens Camera takes autofocus to an entirely new level. With a 24.3 MP image sensor, continuous burst of 60 full-resolution frames at up to 12 fps, an OLED Tru-Finder and a 3-way tilting LCD it aims to please.

Sony describes the new ?77 II camera as delivering “an impressive combination of speed, versatility and efficiency in a tough, weather-resistant design”.

The camera uses Sony’s Translucent Mirror Technology, the ?77 II also has the ability to shoot at up to 12 fps for 60 total frames with continuous AF. The camera is equipped with a high-resolution 24.3 MP image sensor, a BIONZ X processor includes a variety of new pro-friendly video functions for movie makers. Compared to the original ?77 the ?77 II’s image quality has an increased sensitivity of 20%.

Key Features of the Sony ?77 II Interchangeable Lens Camera Include:

Additional Sony ?77 II Interchangeable Lens Camera features that will be of interest to movie makers include:

The Sony ?77 II Interchangeable Lens Camera is compatible with a range of versatile ? accessories including microphones, flashes and more, and is designed to work the optional VG-C77AM grip, which enhances camera operability and versatility during vertical shooting. The Sony ?77 II interchangeable lens camera will be available in June. For a suggested retail price of $1800 it will ship with a 16-50mm F2.8 lens. The body only will be $1200. You can see the entire lineup of Sony cameras here.