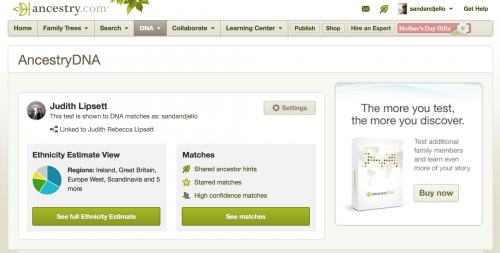 Last month I shipped a vial of saliva that I’d collected to Ancestry DNA; the hope was that their lab could tell me more about my genetic relatives, geographic origin, and my ethnicity. The results are in, and while there were no huge surprises,  I did get some answers. 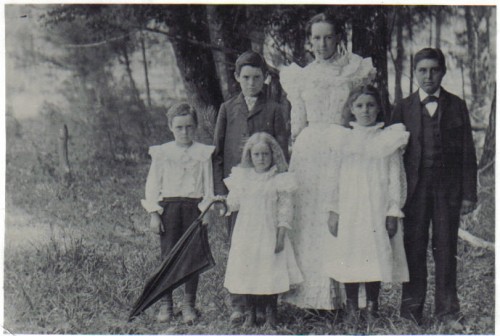 Before I discuss my results, let me tell you a little bit about my family and what prior research has shown.

My paternal grandfather was 100% Irish and a second generation American; my paternal grandmother was Pennsylvania Dutch, descended from German and Swiss immigrants in the mid 1700s. This I knew. 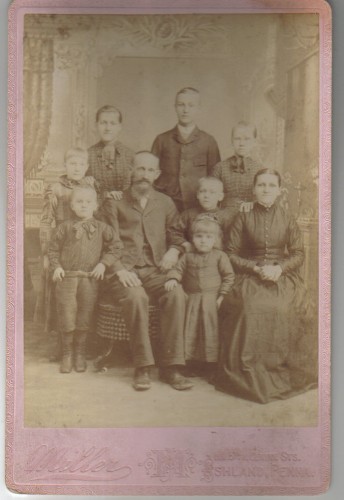 My maternal grandfather’s family were from England, and several of my ancestors in that line were among the earliest settlers in Virginia and more recently two Texas Senators. 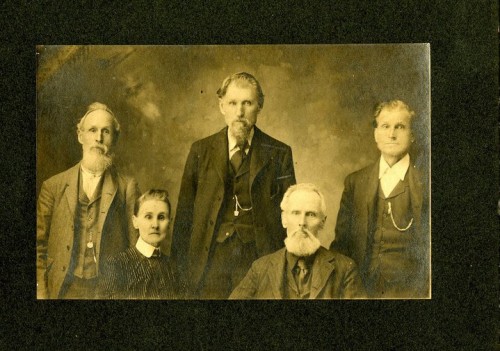 My maternal grandmother’s family was rather interesting in a historical sense; my 4th great-grandmother (Nancy Graves Hendrick) was a direct descendent of Edward II, who was married to Isabella Capet, daughter of Philip IV. Philip IV was the French king who was responsible for the destruction of the Knights Templar (Friday the 13th massacre) and other atrocities; Philip “The Fair” (1268 – 1314) was my 21st great-grandfather. Needless to say, this knowledge makes historical stories like The Iron King (Book 1 of The Accursed Kings series)

feel a bit more personal, but the reality is that being distantly related to royalty and $2 will buy me a Diet Coke, if you catch my drift.

Anyway, my point is this: I knew going into this DNA experiment that I should skew heavily toward Ireland and England, and that there should be solid representation from France, Germany, and Switzerland (Western Europe). I was hoping for a bit of evidence that might prove my Irish grandfather’s theory that we had Jewish blood, and I was hoping to see if I had any Native American blood, since family legend had it that Elizabeth Batson, my 4th great-grandmother was at least half-blooded Cherokee.

And here were my results … 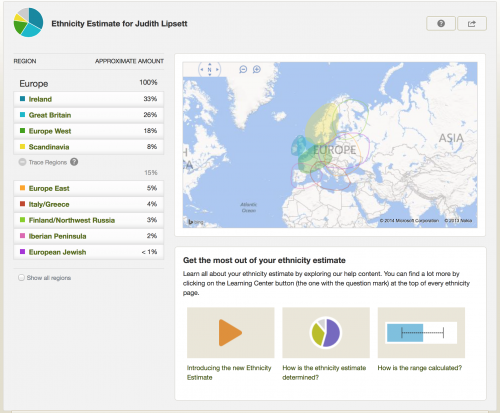 So in other words, no big surprises; everything was in line with what I had expected to see. Interestingly enough, there was a tiny trace of European Jewish, but it is so small that I think it could almost be an error in the reading.

Contrary to family lore, there was no indication of Native American ancestry, whatsoever. I have no idea what’s going on there, as there were two other people with similar DNA who matched at the same point — a 7th great-grandmother with a decidedly non-Anglo name. 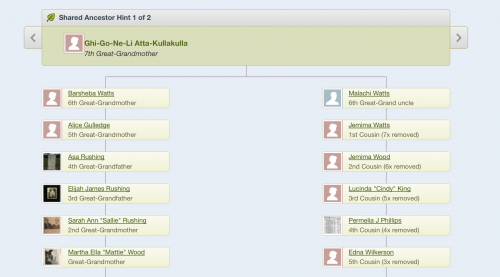 For each region, Ancestry has a page that compares the person tested to the “typical native”, and then a bit of info is given about the genetic diversity of people in the region; here’s Ireland as an example. 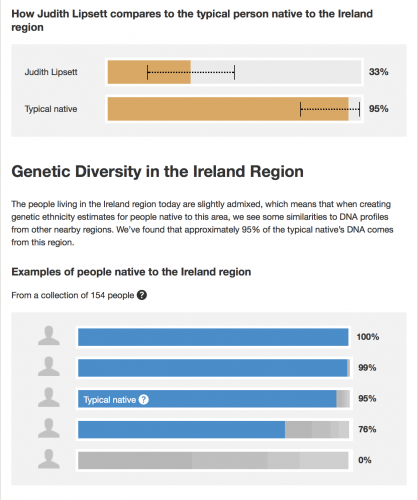 If there are other regions commonly seen in the native people, they will also be listed. 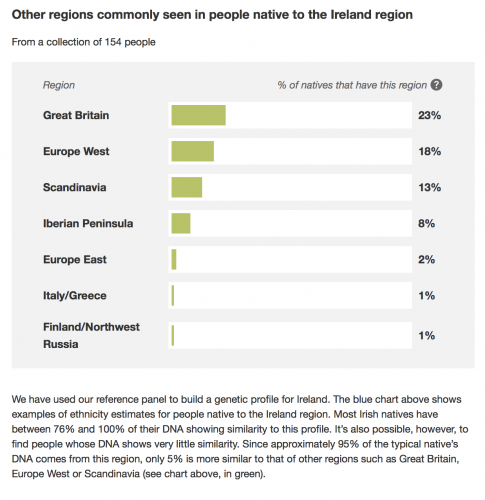 Next, there is detailed information about migration patterns, invasions through the years (explaining some of the other ethnicities mixed in with the regions), and a little bit about the area.

Ancestry does this for each one of your regions, and it is a good mini-geography and sociology lesson.

For the amateur genealogist, ethnicity percentages are only part of why one would want to do the DNA testing, of course. The ultimate payoff is a chance to look at the matches that Ancestry DNA makes between your DNA and others who have submitted their own; I had 151 pages of people with relationships to me of varying degrees. The thing is, that some of the people who were genetically closest to me — in the 3rd cousin range — didn’t have a public tree that I could compare to, or they had entered so little information in their tree that I couldn’t spot a common ancestor. 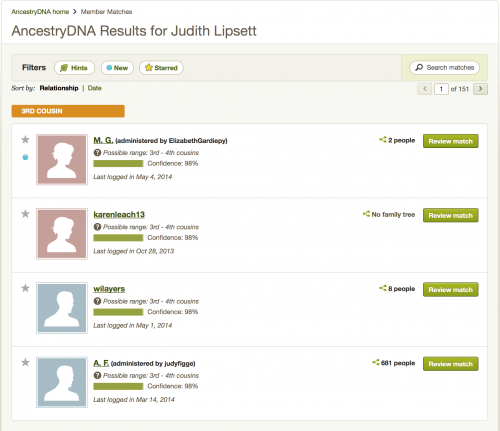 I could spend the time to send each of them messages and try to sort out how we are related, but Ancestry has another feature that satisfies my need to immediate gratification … the Hints filter. 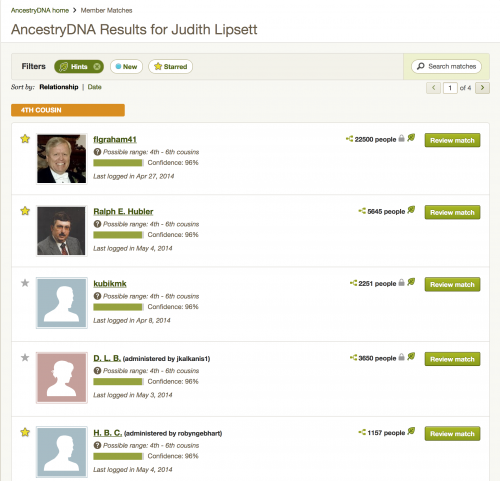 These are the people who are not only related to me by DNA, they have also completed their trees to the point where we have at least one matching relative. 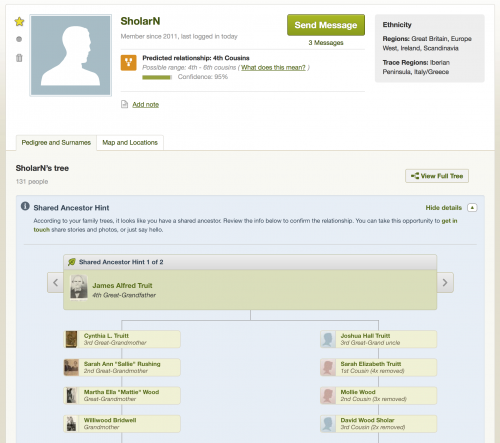 How does this come in handy? Well …

Here is an example of a family mystery I had hoped to clear up:

Was I correct that my 2nd great-grandfather, Joel Meador (who had been left an orphan at age 10) was the son of a particular James Meador that my uncle’s research had uncovered as a possibility? We had a lot of circumstantial evidence, but we needed conclusive proof that we had the right James Meador. 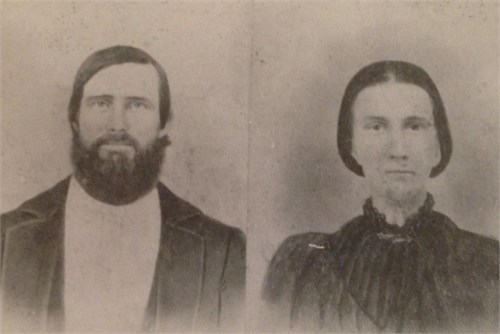 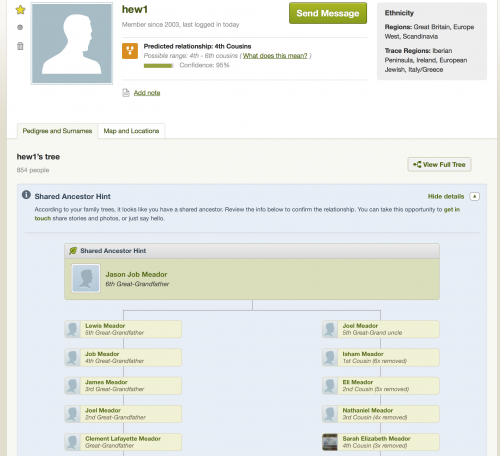 Because I wouldn’t share any direct ancestors with this particular person without my James Meador connection, and because I found even more people with matches at James level or above, I think it is safe to say that this particular James Meador is the correct father of my orphaned ancestor, Joel. Mission accomplished.

I had hoped to find more Lipsett family members back in Ireland, as I’ve hit the proverbial brick wall; evidently no one who has taken an Ancestry DNA test (but me) has Lipsett ancestry.

When I consider how many people on my mother’s side of the family have taken the DNA test, and yet I can’t find anyone on my father’s father’s side who has, it’s rather daunting. My paternal grandmother’s family, the Pennsylvania Dutch side, is well represented through DNA tests, but not the Irish side. It’s frustrating, because beyond my 3rd great-grandfather, Thomas Lipsett (1805-1885, Ireland), I’ve got nothing. At least I do have some information on his wife Catherine Porteus’s family for a few more generations back, but I hit a brick wall in her family with my 6th great-grandfather, Richard Porteus (b1704, Ireland).  The sad truth of it seems to be that unless your ancestor’s ancestors were wealthy, landed, and/or noble, there comes a point where it wasn’t a priority for anyone to keep track of them. My hope is that a Lipsett in Ireland will eventually take the Ancestry DNA test. 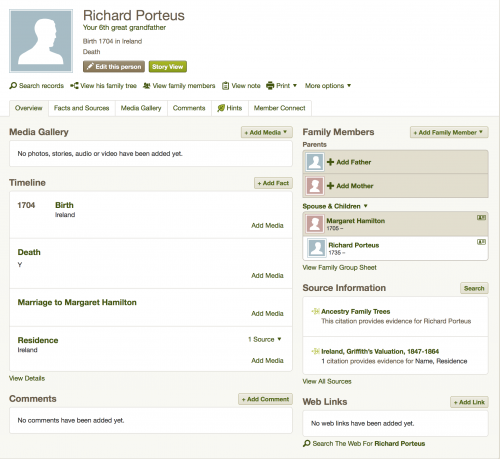 So let’s shift gears for a moment and talk about the DNA that is collected by Ancestry and other ways that it may be used.

In all cases for this Project, personally identifiable information about specific study participants (such as name and birth date) is removed from the Information before it is compiled as part of this Project.

The Project will take all of this information (that is already stripped of personally identifiable information) and compile it into a single data summary to minimize the possibility that any individual participant can be identified by any researcher or other individual from the Information.

Of course, there is a chance that your private personal or health information could be compromised somehow, and that it might somehow be used to identify you. Ancestry says that they will not disclose your “personally identifiable information except as required by law. Please note that a federal law called the Genetic Information Nondiscrimination Act (GINA) generally makes it illegal for health insurance companies, group health plans, and most employers to discriminate against you based on your genetic information. Be aware that this new law does not protect you against genetic discrimination by companies that sell life insurance, disability insurance, or long-term care insurance. There may also be additional risks to participation that are currently unforeseeable. We do our best to ensure that this does not happen and you should read our Privacy Policy and FAQs for more information.”

One of the results of having my DNA tested was that I now have a Raw DNA Data file. I have no idea what I will use it for, but I’ve got it now. This is what Ancestry has to say about raw DNA data:

The raw DNA data provided consists of the 700,000 plus SNPs that have passed the AncestryDNA data quality filters and have been used in our analysis. SNPs included in this list return results from more than 95% of our customers, present no more than one mismatch in duplicated runs and pass the Hardy-Weinberg equilibrium test.

The raw data is subject to the  AncestryDNA Terms and Conditions  and  AncestryDNA Privacy Statement. You must not use the raw data in whole, in part and/or in combination with any other database for any discriminatory, breach of privacy or otherwise illegal activity (for example, to re-identify any anonymous donor or to make insurance or employment decisions). Once you receive the downloaded raw DNA data, that copy will not be protected by our security measures.

The raw DNA data is for your personal use and is intended for genealogical research only. Please keep in mind that while the exported data is created by our advanced genotyping process, it has not undergone the required procedures needed for medical and health professionals or for legal proceedings. As such, this information is not intended for medical/health purposes or for legal proceedings.

The fact of the matter is that we are living in a brave new world, one where DNA information can be gathered and assessed. I know that there are some who will fear giving a sample because they’ll be afraid of the results being used to discriminate against them somehow, or that the data will be used for other nefarious reasons, put this is a time where I can’t help but put my fears to the side and trust that my genetic info will only be used in the manner I intended when I donated it. Genealogy is more than just a hobby for me; it is a connection with the people who came before me, and it is — in its own small way — an opportunity for these people and their stories to not be forgotten.

I like the idea that in 100 years, I may have a great-great granddaughter or grandson who will take pleasure in updating our family tree, and perhaps going even further back than I’ve been able to. Who knows what tools will be available to the amateur genealogist in 2114; in 2014, it is Ancestry DNA, and I am glad that I was able to contribute to it and benefit from it.

The cost to buy the Ancestry DNA Test kit is $99; use the code FREESHIPDNA to get free shipping.