As expected Amazon today announced that Amazon Prime would begin streaming a collection of shows from HBO. The move adds value to Prime just as the company raises the price of the service to $99 per year. For that you get Prime Instant Video, free two-day shipping, a free book every month and more. Get your free trial here. 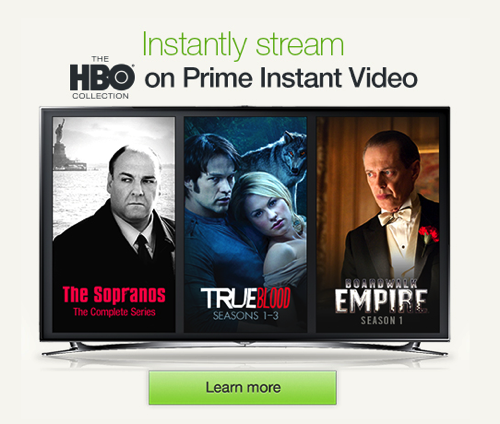 The text of the announcement reads as follows:

Today, we’re excited to announce a one-of-a-kind deal that brings dozens of HBO’s groundbreaking and award-winning shows to Amazon Prime members at no additional cost.

Prime Instant Video
This collection of iconic HBO series includes all seasons of The Sopranos, The Wire, and Deadwood, epic miniseries including Band of Brothers and The Pacific, and select seasons of current HBO hits such as True Blood and Boardwalk Empire. Amazon Prime gives you unlimited, instant streaming of these much-loved HBO series to watch for the first time, or re-discover from the beginning.

Millions of people enjoy Prime Instant Video, included with their Prime membership. With free two-day shipping, a free book every month from the Kindle Owners’ Lending Library, and more than 40,000 movies and TV episodes, Amazon Prime is the best deal going at just $99/year.

Get your free trial here. I’ve had Prime from the start and consider it to be an excellent value that just keeps getting better.