Like gearheads, fishermen, and cooks, golfers can’t ever seem to have too many gadgets, especially if they promise to help lower his or her score. The Pill is a new training aid that has a novel design to improve your game all the way from tee to green. Lord knows I need the help, so I gave it a try. 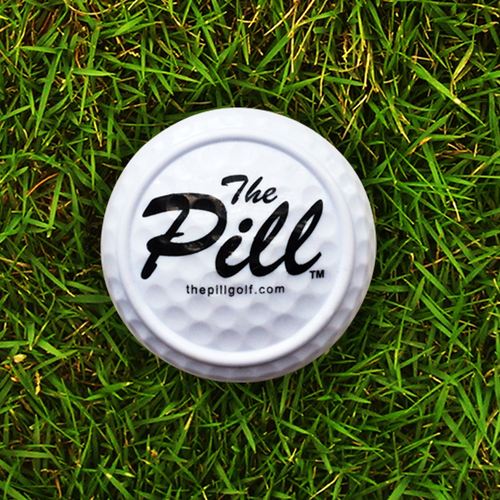 When the makers of The Pill generously offered me a test sample of their Warm-up Set of three balls, I’ll admit to being a little bit dubious. Basically, The Pill is a regular golf ball with a slice cut off of each hemisphere, leaving a core that looks like a tiny car tire. It retails at $12.95 for one or $37.95 for a three-pack.

As silly as that might look, this design is exactly what allows The Pill to be such an effective learning tool. Like an auto tire that wobbles unless you roll it completely straight, The Pill magnifies any mis-hit or spin that is imparted when you strike the ball. Traditional golf balls are designed to self-correct the sort of sidereal motion that we hackers introduce to the swing process, but The Pill will not allow you to hide. 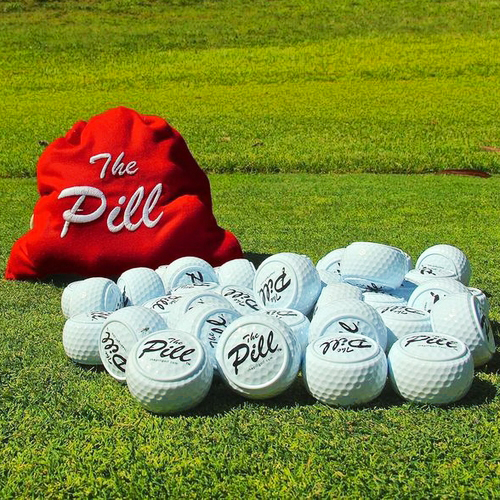 On the putting green, The Pill requires you to pay close attention to your club alignment since it is easy to track the exact path of your putt as it rolls. I have a friend who likes to line up his putts to the right of the hole and hit across the ball with a slice like a masse’ shot in pool. That dog won’t hunt with The Pill. His practice putts wobbled drunkenly farther and farther from the cup, and he angrily threw the Pill at me and told me exactly where I could put it. Or putt it.

However, proper alignment and a squarely struck putt will roll satisfyingly straight and true to the hole, and the process feels quite natural as it plops in the cup. Short putts or long putts all seemed to roll well, though the longer attempts do tend to magnify errors. The Pill’s website offers several training videos and regimens to get the maximum use from their handy little aid, both for on the green or on the course.

That’s right, The Pill’s utility isn’t limited to just on the putting surface. Ever the Doubting Thomas, I couldn’t believe that The Pill would be very useful from tee to green, but it was surprisingly effective. Just like with a putt, mis-hit drives and iron shots offer dramatic visual evidence of improper strikes with a wobbling flight path that looks like a tiny UFO screaming through the air.

I kept one of The Pills in my pocket during a recent round and dropped it next to my regulation ball on several occasions to check if I was swinging squarely. With a smooth swing, The Pill traveled straight and true, once even embarrassingly surpassing my official drive. (Which I had shanked.) Don’t expect much roll out on the fairway from The Pill, though, since it tends to fall over dead as soon as it hits the turf. It was also very useful for verifying my alignment toward the hole, something I probably don’t concentrate enough on with a full sphere of a ball.

As a training aid or a confidence-builder on the practice green, I found The Pill to be a quite effective and fun little gadget. At $12.95 for one or $37.95 for a three-pack, it’s a heckuva lot cheaper than a lesson from a golf pro. Don’t let the snickering of your golf buddies get to you. Maybe you’ll make it up to the on the course.

The Pill is available from the company’s website or from major golf retailers like Dick’s Sporting Goods and Golf Galaxy.

What I Liked: Ease of use and flexibility from the tee to the bottom of the cup. Strong visual feedback to demonstrate flaws in your swing and/or alignment.

What Needs Improvement: I didn’t like being laughed at on the practice green at a recent tournament when I pulled The Pill out of my pocket. Until I won a prize for sinking the longest putt on #9.