Back in 2010 during an Apple press conference Steve Jobs famously said that “no one’s going to buy” a phone so big you can’t get your hand around it. At the time Jobs was referencing the  early trend of bigger phones – namely the Samsung Galaxy Note. Looks likes jobs might have been wrong if a recent IDC forecast comes true. 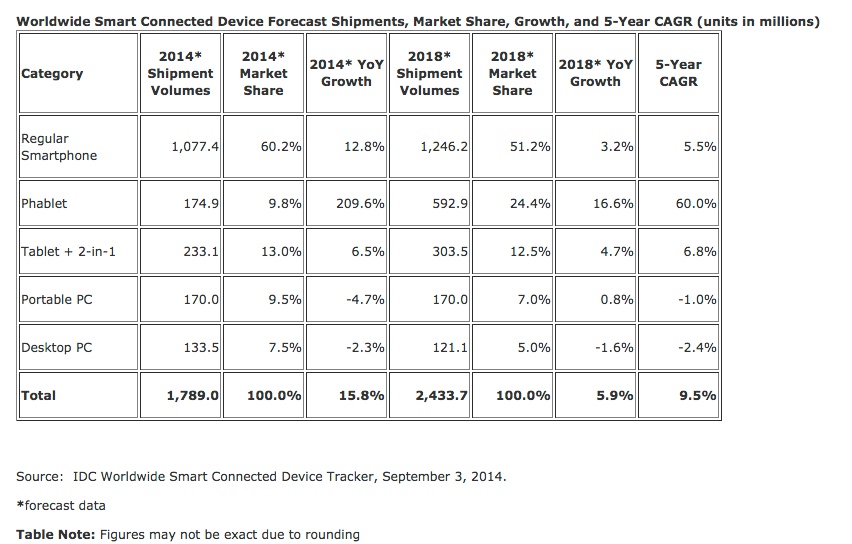 According to an IDC forecast  released today phablets (defined as smartphones ranging in size from 5.5″ to 7″) could grow from 9.8% of the 2014 connected device market to 24.4 % by 2018. This rate of compound annual growth would be 60% surpassing all other categories – including tablets (6.8% forecast) and smartphones (3.2% forecast).

It also looks as if the phablet may kill –  or severely maim – the growth prospects for tablets. IDC predicts  by 2018 phablets could outsell tablets by nearly 2 to 1. In addition the devices are expected to continue dropping in price – further fueling their growth:

As the Smart Connected Device market matures, and emerging markets drive more of the growth, the percentage of the market made up of phablets plus regular smartphones is expected to increase. In 2014 IDC expects smartphones to represent about 70% of the total market. By 2018 that will grow to 75.6%. While consumers in places like the United States and Western Europe are likely to own a combination of PCs, tablets, and smartphones, in many places the smartphone — regardless of size — will be the one connected device of choice. Dropping average selling prices (ASPs) for phablets and smartphones will help drive this trend. In 2013, a phablet cost an average of US$568 versus a regular smartphone at US$320, while IDC forecasts that in 2014, those prices will drop to US$397 and US$291, respectively.